Mike Teavee’s fate at the other end of his teletransporter adventure is to be re-assembled — but not quite at the right scale.  In the 1971 adaptation this means a not-too-convincing front projection effect to show Mike to scale with his profoundly dismayed mother. 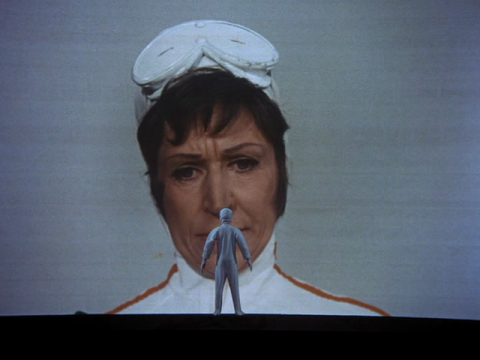 Special effects technology had improved a lot by the time of the 2005 adaptation, but Mike still ends up tiny. 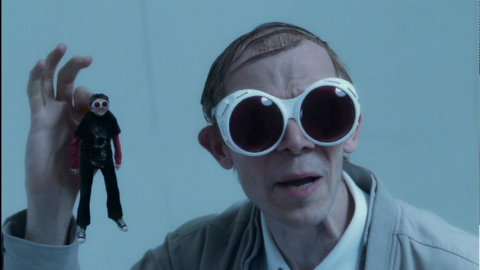 The concept of someone shrunk to really tiny through either magic or mad science is at least as old as Alice’s Adventures in Wonderland (and probably much older). but the 1971 adaptation is the first cinematic version of the idea I can recall seeing, and probably the first that many other people can recall seeing as well.

And unsurprisingly, it’s fetish fuel for some.   For one thing, if you shrink only the person but not the clothes, it’s a way to get someone naked in a hurry.  (It’s the flip side, of course, of making someone expand dramatically without the clothes adapting.)  I’ll admit, I’ve gone there before, and I’ll go there again with a slight re-write, if only because I want to try out a bit of new blogging technology.   I’ve been trying to figure out a means for comic book scripting in HTML that shows possible underlying panel and page geometry better than a simple linear script.  Of course that’s not something that a person of ordinary prudence and common sense would attempt, but since I’m clearly not one of those, here goes:

It’s worth noting, I suppose, that Tim Burton, whom the Gods blessed with abundant weird and who did both the 2005 Willy Wonka adaptation as well as a recent version of Alice in Wonderland does toy with the idea that shrinking and growing will get the pretty girl out of her clothes.  But of course, since it’s a PG-rated movie made within the Empire of Mouse, he only toys with the idea.

Out on the wide Internet, we might be poor in resources but we are rich in creative freedom, and people go much deeper into the kink of shrinking.  One of the finest might be the Minimizer, who really has a thing for shrinking women, and unsurprisingly often for the mad science that might lead to their creation.  Ve comes up with the most becoming of sketches. 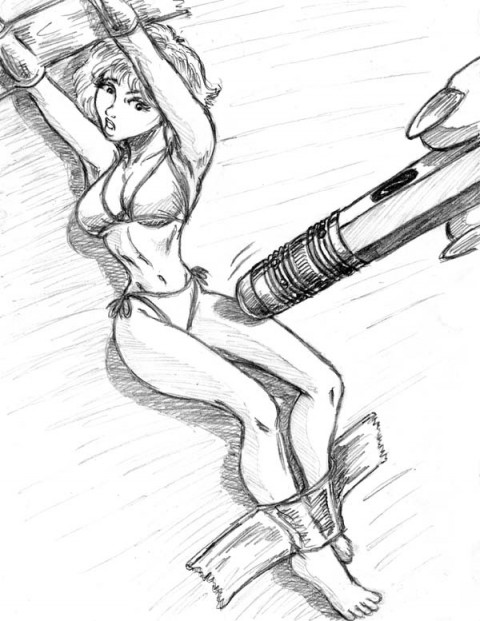 Should you wish to extract some extra kink from the image, the (probably) mad scientist who wields the pencil which helpfully provides a sense of scale here is a woman.

The Minimizer does commissions.  And the links page shows that there are some people who are clearly way into all this.  I wonder how much of it might have started with Mike Teavee… [Faustus May 11, 2018: This information is probably no longer current as the Minimizer’s site appears to be no longer maintained. The one link in the post above is to a preserved version in the Internet Archive.]