What was it over at Weird Science?  Did the spirit move Bill Gaines about once a year to shout across the office to Al Feldstein, “Al, we really need another story about a melting woman.  Write one up and get Jack Kamen to draw it, stat!” 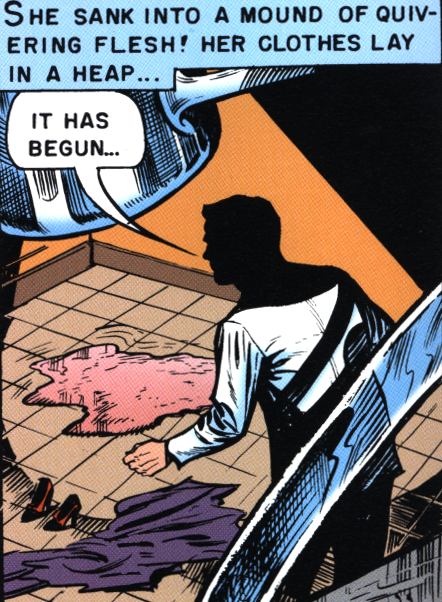 Similar conceit to that of “Something Missing,” down to the agreeable fetishist’s detail of her melting out of her clothes.

Here’s the context, taken from the story “Divide and Conquer.”  A middle-aged scientist is working on a technology — in this case, some sort of drug — that causes living organisms to dissolve, divide, and re-form.  Consistent with the principle of conservation of mass (Science!) the re-formed organisms will be copies of the original, but half-sized unless they do so in the presence of an appropriate nutritive medium.

Our scientist is married to a beautiful woman and, because he lives in the EC fictional universe, it’s a horrid marriage.  She’s cheating on him and plotting murder.  She discovers to her considerable sorrow that it’s pretty tough to murder someone who can copy himself, and it’s even tougher when the surviving copy returns to exact retribution with his copying formula. 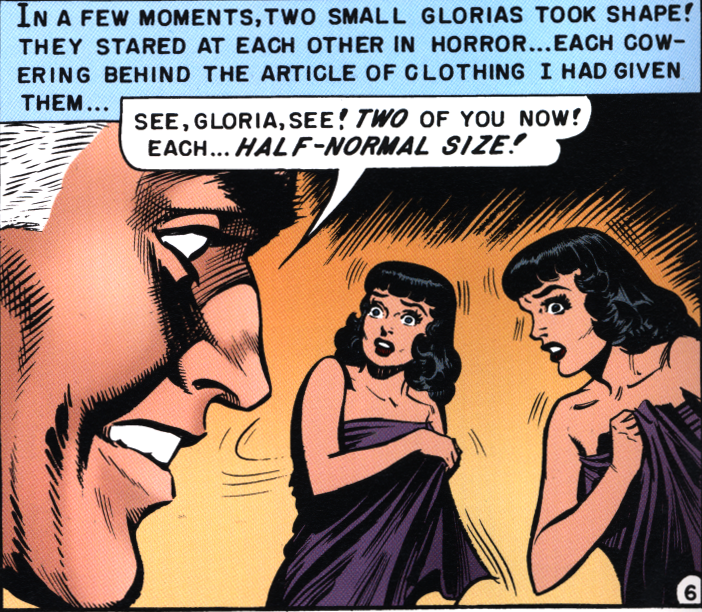 (Ah, suggestions of comic book nudity. And created by science! And of course entirely-necessary-as-part-of the-plot-nothing-exploitative-here-please-move-along.)

Sometimes, I’m almost afraid that someday I’ll be perusing Weird Science and come across the trope of a whole college full of reckless, oversexed students and a faculty which regards them as experiment fodder…