An oddity of this movie is that it seems to exist in two versions, a “clean” version without nudity and a “dirty” one, in which whole scenes in the clean version appear to have been re-shot with naked actors.  The “dirty” version, at least the one I was able to find as bonus material on my DVD version, has very low print quality — fuzzy images and poor lighting.  The “dirty” version also appears to have some complete sequences that were cut from the “clean” one entirely.

The monster is then dispatched on the errand of raping and abducting pretty women, who are to be brought back to Cagliostro’s castle where they are to be…well, used for parts.  One of them, played by Britt Nichols, puts on a great “woman in peril” face in her final moment.

Which somehow is even starker as a (supposedly) decapitated head.

But don’t worry.  As we shall see, she’ll live again.  Sort of.  These relatively crisp images are from the “clean” version.  In the “dirty” version, the camera gives us a close-up panning full-frontal shot whose poor lighting presents too many technical challenges to reproduce here.

Fortunately for the forces of good, or at least the forces of less evil, Dr. Frankenstein has an avenger in the form of his own daughter, Dr. Vera Frankenstein (played by Beatriz Savón), who just by the merest chance, happens to be a hot scientist in her own right.   She responds to her family tragedy like any devoted child would:  she digs up her father’s corpse and hauls it into the laboratory for a session with the Fixation Ray.  The Fixation Ray was what the elder Frankenstein used to animate his monster.  As Vera demonstrates, the Fixation Ray can also be used to provide prompt, temporary relief from the symptoms of death.  Long enough to ask Dad who was killed by, anyway.

Finding out that it’s Cagliostro who’s to blame (and isn’t it always), Vera pulls a move worthy of a Gnosis College heroine.  She substitutes herself in the place of one of Cagliostro’s victims, getting herself abducted by the monster for the purpose of infiltrating his castle.  This works…right up to the point where she’s unmasked.

Things are pretty tough for Vera from there.  She is tied back-to-back with a minion of Cagliostro who in typical evil-minion fashion has failed his master at a critical moment.  The pair is then placed inside a field of giant, poisoned spikes and flogged by the monster.  The first to fall, dies.  Even in the “clean” version the resulting spectacle is pretty damn kinky.

After Vera survives (and also possibly after a “send her to my chamber” episode that only exists as a fragment on my DVD’s extras)  she’s subjected to Cagliostro’s mind-control powers and put to work, using the parts Cagliostro has been accumulating to construct and animate a “perfect woman,” whom he intends to mate with Frankenstein’s male monster for the purpose of creating a new master race.  (Oh, how very original.)  At least Cagliostro picked the parts well.

Hot scientist at the ready.

And in the “clean” version we see this:

And the dirty version this: 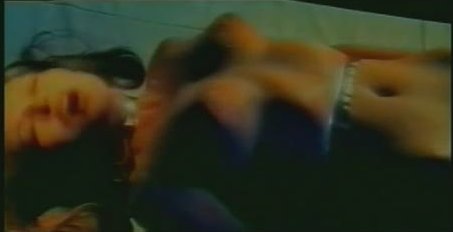 But things don’t quite work out for Cagliostro, because the monster’s residual loyalties to Frankenstein kick in just as he’s about to made with electro-woman and he runs around smashing stuff up.  Cagliostro drives off laughing maniacally, apparently to his death, except that it’s not really his death because somehow he’s managed to impregnate Lina Romay, who’s otherwise spent the entire movie wandering around in a meaningless detached subplot and will be reincarnated in the body of the child she’ll give birth to.  Or something.   Way to wrap things up there, Jesús.