While browsing around for fetish-fuel material pertinent to Cleo Mount’s adventure abroad, I came up with this curiosity at an online fetish e-book seller.* 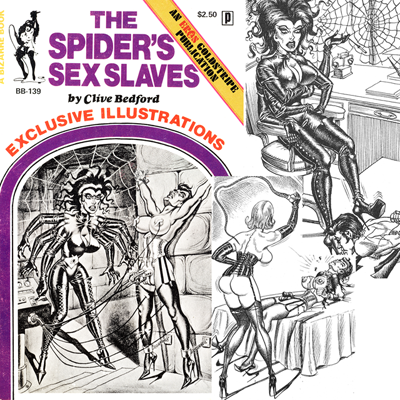 Clive Beford’s [sic] articulate prose creates a strange world of ingenious women who developed a subterranean community where men are used as servants, slaves and playthings. The Spider Lady collects an army of competent female characters who populate a bizarre world of work, technology, armaments and wealth.

And in particular, it contains a character named

…Dr. Klebanoff, a gifted surgeon who used her extraordinary skills to change captive men into sex-toys for the hard-working staff.

Now that sounds like a mad scientist indeed! (But a quibble for Mr. Bedford — if this gifted surgeon is a woman, shouldn’t her surname name be…Klebanova?)

I haven’t read it, but it looks like I’m likely to.

(*) Exercise you imagination for a second, and imagine yourself transported in time back to 1950, and trying to explain to someone at that time that in your time there are such things as “online fetish e-book sellers.” Not so easy, is it?