It all started when i tried tracking down the provenance of this image, which I originally saw elsewhere.  (My original though was just “Wow, what an amazing sex machine!”) 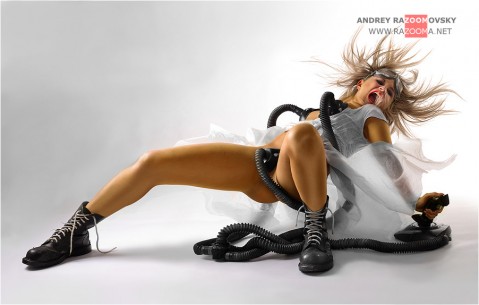 Sometimes virtue is something more than just its own reward, because I found its apparent home in this wild “Не серьезно” gallery at the Russian-language site razooma.net.  It’s sort of a photo-alter dream for thaumatophiles, so if you like this site, I strongly encourage your surfing over there and looking for, among other things, some swell woman-to-instrument transformation pictures, as well as a photograph that might have been taken from my own infantine butterfly-transformation fantasy.

And there’s a bonus for you Russophone readers.  “Andrey Razoomovsky” is a slightly eccentric transliteration of  “Андрей Разумовский.”  Can you spot the Slavic root in that artist’s surname?  It’s разум, meaning “reason, mind, intellect,” which is pretty cool for a site with so much implied mad science, yes?

One thought on “Amazing photo gallery”