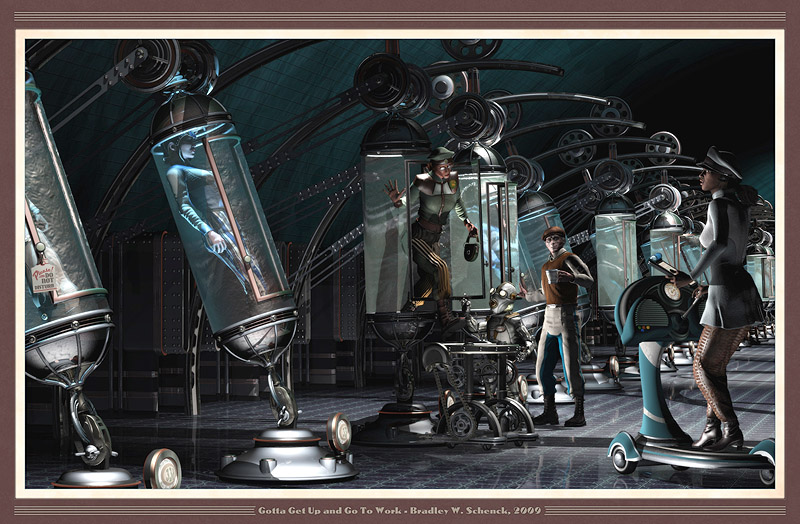 My original tumblr post was here. This image is Gotta Get Up and Go to Work by Bradley W. Schenck, who comments thus on his own work:

Retropolis offers a wide variety of accommodations to the tourist or traveler: from five star suites in the floating Galacticon hotel, through the more utilitarian, blastproof rooms made available to the conventioneers of The Society of Demented Research Technicians – and finally, to these modern and streamlined sleeping tubes at hotels like downtown’s “Tubular Belles”.

Sleek and affordable, these tubes bathe the sleeper in a sonic shower that cleans both sleeper and clothing. Visitors awake refreshed and ready for a new tomorrow – helped along by the hot, strong coffee that tops off the hotel’s complimentary breakfast.

This all happened because of a series of blog posts at the Posthuman Blues blog – [link] … there, for example.

And I started to feel like less of a man because I’d never put women in tubes into my own pictures. I mean, obviously, it’s fundamental, right?

But it’s not enough to just stick a women in a tube. Not EVEN in the seventies. What the heck are they doing in there? How did they get into a freaking tube, in the first place? It can’t be like that ship in a bottle thing: that’s disgusting. How do they get out? And, as always, who stands to benefit from all these women in tubes?

So I’ve tried to answer these questions, and in the act I also made the tubes coeducational. Because that’s how I roll.

the title’s from a song of 1933, by Olive Levine & Beany Miller. Because that’s ALSO how I roll.

In addition to his DeviantArt site, Bradley W. Schenck maintains an interactive story site, Thrilling Tales of the Downright Unusual.