Following changing business models in the adult industry, Bacchus now has a Patreon: 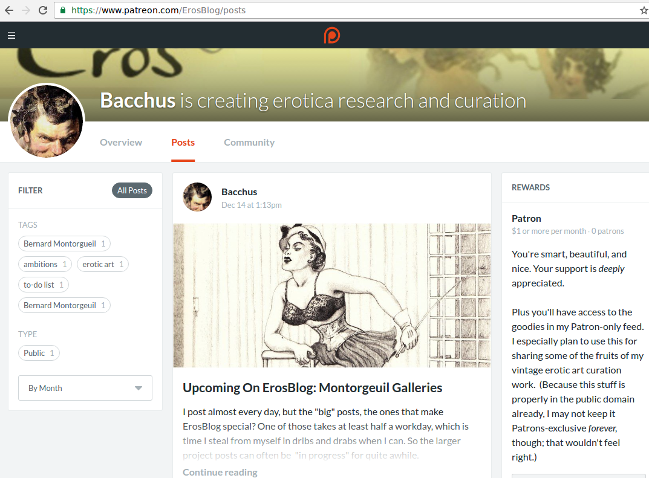 Bacchus describes the mission he’s trying to fund as follows:

In my experience (an experience shared by the many readers of ErosBlog) Bacchus is a great documenter, and those of you who follow my own blogs have seen some of the intricately detailed attributions he has worked out for images that I thought were completely orphaned, both here and over at Infernal Wonders. I have always been delighted to be able to feature this work. All this art and writing, everything from hard-boiled pulp and sci-fi art to squicky fetish porn matters. It’s not trash, and it’s not just fap material. It’s culture, part (and not a small part) of the invaluable record of the psychic life of humanity.

Precisely because it is so likely to be dismissed as trash or ephemera, this part of humanity’s cultural wealth is particularly vulnerable to loss. Much of the early output of cinema is lost, because at its outset were not thought not a “serious” art form and so its fast-decaying film stock was not thought worthy of preservation until it was too late. I have many old pulp magazines that I handle only with trepidation, because as “trash” they were printed on cheap, acidic paper, leaving them now fragile yellowing husks of their former two-fisted selves. The very first television series starring an Asian-American woman (the incomparable Anna May Wong, at that), as well as the first to star an African-American woman (the also incomparable Hazel Scott) were lost because hey, it was only television, the were only women of color, and their shows were only on the Dumont Network.

3 thoughts on “Bacchus has a Patreon, so do the right thing”