Did Censorship Kill the Shudder Pulps? Canadian Editions
Some co-blogging by Bacchus

Bacchus uncovers a historically-significant article, referenced in his research. 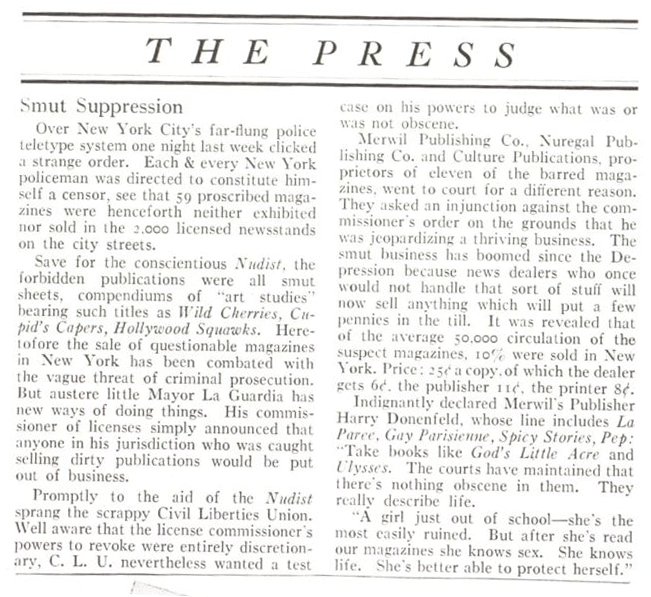 Over New York City’s far-flung police teletype system one night last week clicked a strange order. Each & every New York policeman was directed to constitute himself a censor, see that 59 proscribed magazines were henceforth neither exhibited nor sold in the 2.000 licensed newsstands on the city streets.

Save for the conscientious Nudist, the forbidden publications were all smut sheets, compendiums of “art studies” bearing such titles as Wild Cherries, Cupid’s Capers, Hollywood Squawks. Heretofore the sale of questionable magazines in New York has been combated with the vague threat of criminal prosecution. But austere little Mayor La Guardiahas new ways of doing things. His commissioner of licenses simply announced that anyone in his jurisdiction who was caught selling dirty publications would be put out of business.

Promptly to the aid of the Nudist came the scrappy Civil Liberties Union. Well aware that the license comissioner’s powers to revoke were entirely discretionary, C.L.U. nevertheless wanted a test case on his powers to judge what was or was not obscene.

Merwil Publishing Co., Nuregal Publishing Co. and Culture Publications, proprietors of eleven of the barred magazines, went to court for a different reason. They asked an injunction against the commissioner’s order on the grounds that he was jeopardizing a thriving business. The smut business has boomed since the Depression because news dealers who once would not handle that sort of stuff will now sell anything which will put a few pennies in the till. it was revealed that of the average 30,000 circulation of the suspect magazines, 10% were sold in New York. Price: 25¢ a copy, of which the dealer gets 6¢, the publisher 11¢, the printer 8¢.

“A girl just out of school — she’s the most easily ruined. But after she’s read our magazines she knows sex. She knows life. She’s better able to protect herself.”