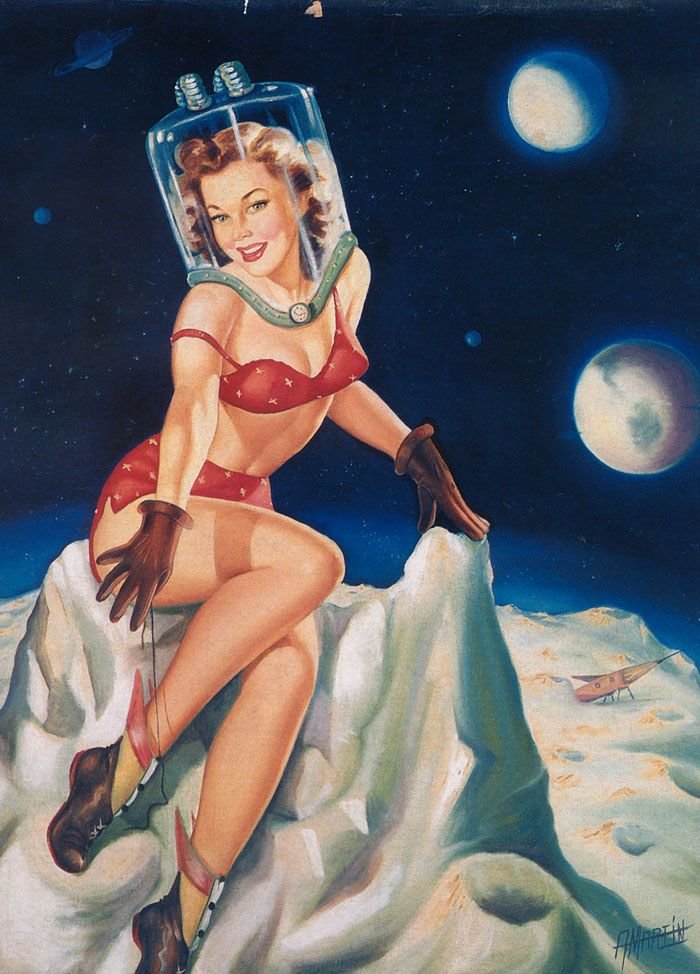 Original post here. This image was researched by Bacchus at ErosBlog as part of the “Γ commission.” The research was originally published at Hedonix as “Γ 051 – Space Pinup.” Here is what Bacchus found.

This image made its internet debut in a Flickr set scanned and posted by Edmond Hidalgo, who is quoted on BoingBoing in 2005 with this explanation:

“The other day opening a random calendar I found while I was moving stuff and selecting what to throw away, I found this really nice vintage Illustrations from mexican artists in the calendar, which I fell in love with, so I decided to scan them. Notice the authors’ names weren’t on the calendar or any kind of credit, if anyone knows who are it would be really appreciated.”

This particular image has a stylized “AMartin” signature lower right. Based on that, and on the Mexican calendar art provenance, I was able to turn up this capsule biography of one Angel Martin:

Born in Barcelona in 1932, Martin moved to Mexico and started working at the Galas de Mexico printshop in 1952. This shop specialized in making cigarrette packages, matchboxes and calendars for which superb realists such as Jesus Helguera and Angel Martin would provide illustrations. After 9 months at Gala he had a big enough reputation that he could leave the shop to provide paintings for them and other printmakers. Most of his paintings dealt with propaganda, political and religious. In 1976 Santiago Galas sold 60% of his company to Grupo Carso headed by Carlos Slim who acquired many of the original paintings made for the shop. In recent years Angel Martin has been working themes related to Don Quijote, nudes and mythology. 12 of his works are part of the Soumaya and Telmex museums in Mexico City.

One other Angel Martin painting available online has a different signature style with “Angel Martin” spelled out, but there are similarities in lettering suggesting that it’s the same artist. In further confirmation, the image appears on a Mexican telephone card from the Soumaya Museum, where it is credited on the reverse as “Angel Martin / Sin Titulo [untitled]”: 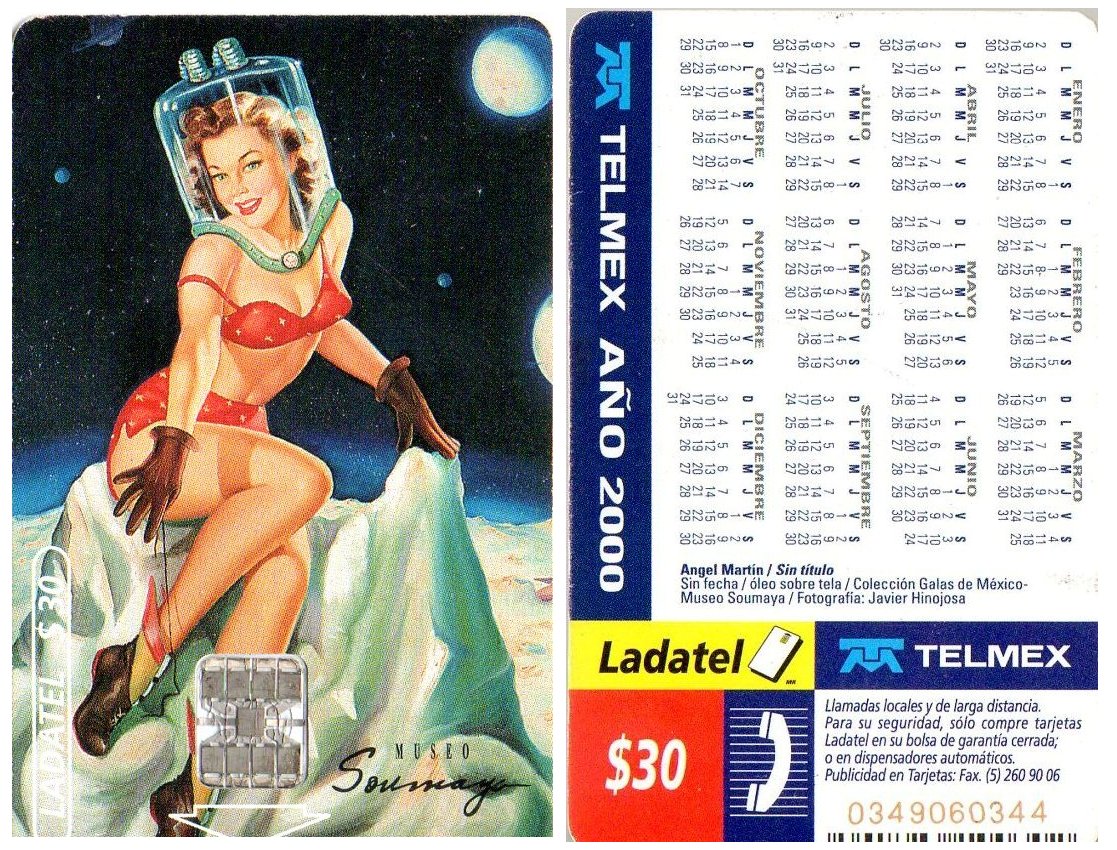 The image credit further reads “Colleción Galas de México – Museo Soumaya”, which I make out to mean “Galas Collection of Mexico — Soumaya Museum.” This article in machine translation describes that exhibition, and references the print shop operation where Angel Martin got his start:

Over 500 thousand picture cards advertising the time of 1933-1970 are exposed in the Museo Soumaya Plaza Loreto, in order to pay tribute to each one of the people who worked at the factory recognized Galas of Mexico, the company that developed the most popular calendars of the nineteenth century. “The show takes place on the 18th anniversary of the institution, and is celebrating with these parts for being the first collections that arrived at the museum”, the curator of the exhibition said in a telephone interview. Located primarily in the street of Isabel the Catholic and later in the brick building of San Antonio Abad, Factory Galas of Mexico made ​​and distributed throughout Mexico each of their cards, those which were designed by artists to be the gift of different pharmacies, wineries, creameries, markets and so on.

The peak time was in the 40s, when Santiago Galas brought together a wealth of workers who could realize the calendar as a publicity element of what was Mexico. During this period various artists such as Jorge González Camarena, Eduardo Cataño, Lemon and Jesus Humberto de la Helguera integrated as part of template to design advertising.