Back in 2010, when this site was just starting out, I had occasion to blog about the work of an obscure outsider artist who called verself “Atomica.” Atomica’s work consisted largely of photomanips of existing porn bring them into the imaginative world of the artist, a world of melting women, mad science experiments, and vore. Looking through the sixty or so extant images, one has a sense of glimpsing fragments of an imaginative universe rather larger than the small artistic catalog suggests. In this world there is some sort of cosmetic/drug/aphrodisiac called “liquid skin,” a flesh-liquifying substance that women play with for sexual pleasure, as well as dangerous insect-like creatures that might eat you alive, or into which you might turn if you play around with too much liquid skin. Here is an example of Atomica’s work: 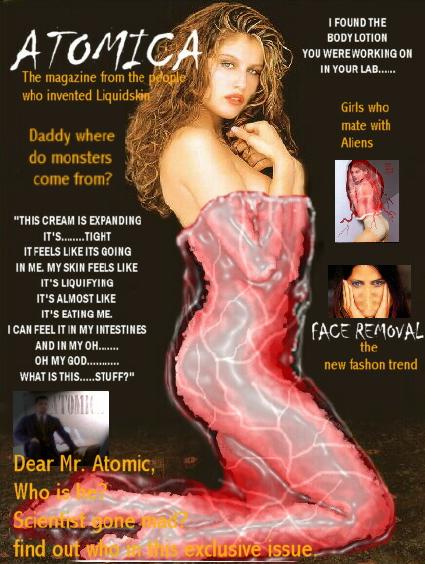 Most of Atomica’s work is heavily captioned like that. That many of the internal captions appear to have been written by someone with an imperfect command of standard English is atmospherically effective, contributing to the general sense of outsider-art strangeness of the whole project.

Atomica’s art appears seems to have been done by or before 2002. When I was writing the 2010 post all I had of Atomica were a handful of images and some notes I took in a journal written in about 2005 or so. (I’ve been at all this for a while, you see.) The site hosting Atomica’s weird art appeared to have vanished off the Internet, destined to be but a wistful memory of an age when the Internet was a fun place for creatives and eccentrics to let their freak flags fly, rather a string of big ugly malls patrolled by corporate goons.

This past weekend I was working on a project to create archival editions of old posts and came across the 2010 post. Since I was busy fixing broken links (link rot being the bane of anyone who keeps a site) I decided to take a whirl at finding the old Atomica art at the Internet Archive, that mighty and wonderful resource, which appears to me to have gotten easier to search as of late.

Within fifteen minutes I had found the Atomica archive on the Wayback Machine. I couldn’t have been happier: crude as it is, this is formative art for me, a real find back in the day when I thought I was just a weirdo having strange erotic thoughts that no one else could have been having. I won’t blog most it it here — much of this material is sufficiently squicky that it merits discussion mostly at Infernal Wonders — but you should feel free to peruse the archive and, for that matter, the other weird material at the fan site that my Archive heroes have preserved.

And if you can contribute, please consider donating to the Archive. It preserves our collected heritage!