Okay, a break for a while from all the heavy stuff, to say the solipsism of writing about my own writing.  Here: 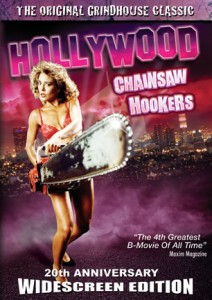 Which is why I sort of have a soft spot for Fred Olen Ray, (personal site here) who seems to be busy keeping the sexploitation flame burning bright, sometimes even with mad-science overtones.  His movies might be utterly goofy, but they can be mined profitably for entertainment.  (Ray has made lots and lots of movies, including Hollywood Chainsaw Hookers, Bikini Drive-In, Bikini Hoe-Down, and the Bikini Escort Company.  We’re talking commitment here, people.) Here’s an example, from Ghost in a Teeny Bikini.

Christine Nguyen here plays “Muffin Baker,” who in turn is playing a character in a movie within the movie (which we will later learn is called Missing in Acting).  And she’s in trouble, tied to a table in the half-convincing-looking mad lab of a “Dr. Sin,” who I think I vaguely remember from graduate school. 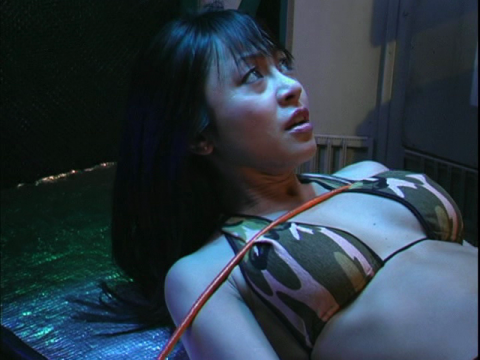 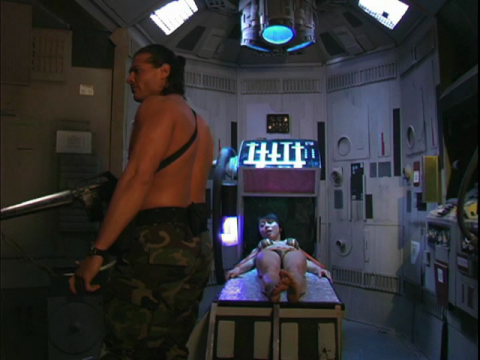 After a bit of sub-Homeric narration by Bardo of his travails in rescuing the girl, we are treated to this bit of sparkling dialog

How much time do you think we have until they blow us all up?

Let’s not talk about killing. We only might have thirty minutes left until we ourselves are killed by those who we seek to kill.

Now you or I, dear reader, might have a variety of reactions to this interesting revelation, among which might be

But you or I, dear reader, clearly would not be following the cinematic logic of the situation.  Fred Olen Ray understands it however.

Makes me melt when you touch me like that. Make love to me, Bardo.

If we are to die, then let it be in each other’s arms. 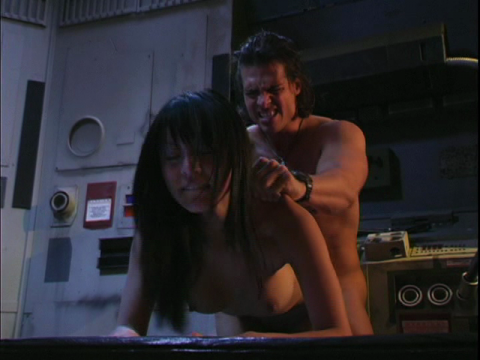 And I know that all dedicated readers of this blog will doubtless look at that last image and think:

That dingus over there in the far right-hand side of the image.  Is that the lab’s main power supply?  What is it running?  What is the experiment?  Please tells us, Mr. Ray!

But unfortunately we never learn, because at that point Muffin’s director-boyfriend yells “Cut!” ending the scene and getting on with the main, and even sillier, movie.

Oh well.  At least I understand that Fred Olen Ray has Bikini Frankenstein coming out, so maybe there’s something for us thaumatophiles to hope for.