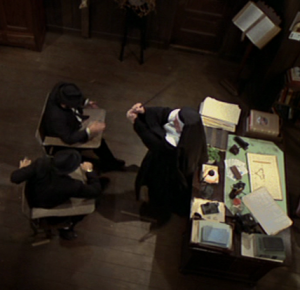 Well, young Willie sure manages to get himself into a complicated and interesting scrape through his illicit invasion of the Magdalene College facilities.

That he should do so is not too surprising in the context of the Gnosis College fictional world, which of course draws on ever pornographic tradition I can find that I find at all interesting.  And as I’ve noted before, anything involving closure, secrets, hiddeness is likely to provoke interesting erotic speculation and narrative.   And convents, and cloistering girls’ schools, doubly so.  In the near term, as many readers of this blog will already know, there is a tradition of movies called “nunsploitation,” which is exactly what it sounds like and even has entire sites devoted to its exploration.  Talk about kink! 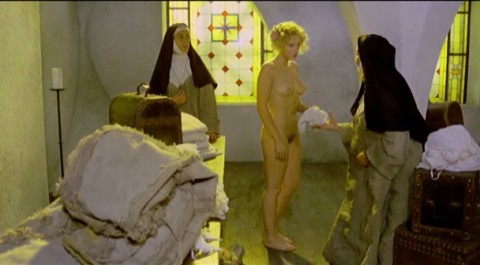 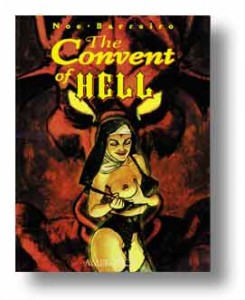 The whole kink goes back much further than ’70s exploitation cinema, of course.  The Italian poet Pietro Aretino (1492 – 1556) is regarded by some as the inventor of modern pornography.  He wrote a famous dialog between a cortesean and her career-minded daughter, the Ragionamento della Nanna e della Antonia, the first part of which contains an extensive discussion of the putative sexual habits of nuns.  (For those of you who like that sort of thing, I am happy to report it is now available in English translation under the title The Secret Life of Nuns from Hesperus Press.)  And of course, we must also note that the immortal Diderot wrote (originally as a prank)  a book about a girl in a convent called La Religieuse, (French-language text here) in which simmering lesbian desire plays no small role.

But probably none of the sources surpass what when on in the imagination of the Marquis de Sade, whose Historie de Juliette, ou les Prospérités du Vice contains the following scene (the translation I use is taken from Camille Paglia‘s Sexual Personae, p. 241.  The original French text is taken from here.)

“One hundred nuns linked by dildoes!” commented Professor Paglia, perhaps a little breathlessly.  “The style of Busby Berkely or the Radio City Rockettes.”

What a shame, really, that the divine Marquis was condemned to live in a world of only eighteenth-century technology and before science fiction had really been invented.  I mean, I guess I’m doing okay, using nuns and ropes and electric motors and natural young-man concupiscence to convert advernturous Willie into the core living component of a room-sized fucking machine.  There’s a decent mad-science feel there, I hope. But just think of what Sade might have done if he had had cyberpunk or steampunk or even just Frankenstein to read!

Whatever he came up with would surely have been worthy of inclusion in Lucien’s library, right up there with the score of Giuseppe Verdi’s Il re Lear and Shakespeare’s history play Richard Nixon.