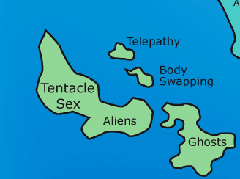 And of course, young Willie manages to step in it again when a (possibly ill-advised) experiment with his work-study supervisor, Professor Rebecca Waite,  runs off the rails. 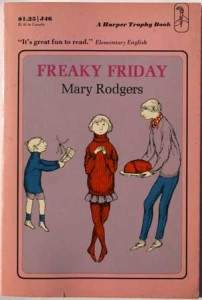 I wish I could point to some of this erotica as a precedent for the Willie/Waite experience, but I actually suspect that I was more influenced here by two other body-swap stories, both non-erotic in their content.  One is Mary Rodgers‘s story Freaky Friday, age-appropriate children’s novel about a one-day body-swap between a mother and her teenage daughter.  I read this and was fascinated by it when I was about eleven.  The other is the explicitly anti-erotic story by H.P. Lovecraft, “The Thing on the Doorstep,” which I first read and was equally fascinated by at age fifteen and which I attempt to honor in the name, “Rebecca Waite.”

A good part of the fun of writing scenes like the one herein discussed is not only do you get to play with an intrinsically titillating idea like swapping bodies with someone else, but you can indulge also the fantasy of crossing into a different gender, as both Waite and Willie do.  If you could “try on” being a different gender I would try it in a heartbeat, and I suspect most of you readers would as well.  Swapping bodies is a fine mad science theme as well because the imagined means by which it might be accomplished — brain transplants, for example — are something that a mad scientist would be eager to try.

Plus I got to indulge one other little trope that makes me squee, which is the nerd who is really a hottie but who covers it up because she (it’s usually a she, in these cases) realizes that as a hottie she wont be taken seriously for the right things. 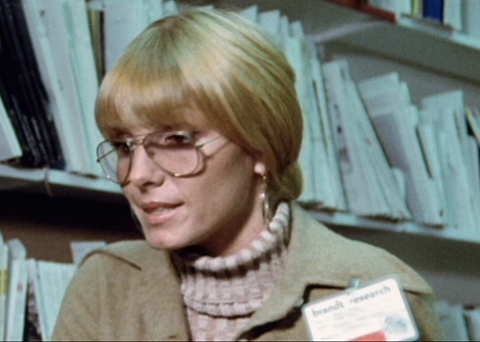 Victoria Vetri in _Invasion of the Bee Girls_ (1973), looking about as nerdy as it is possible for her look.

“You try being taken seriously as a scientist when all your male students and colleagues are staring at your chest.”