Maureen Creel sure stumbles on something unorthodox when she tries to figure out who (or what) is shtupping Lola in the chapel.

As the distinguished proprietor of Bondage Blog has observed and as I have myself argued on occasion, there’s kind of a submission and suffering kink going on in Christianity.  Here are the first two verses of real hymn that neither of us is making up:

Full words along with a score and midi music available here, if you’re interested. 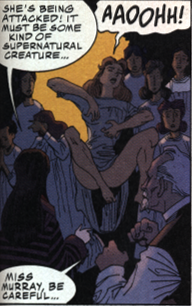 “Invisible man having sex with girls” is of course also a well-established trope — I had to throw in the anal Jesus thing just to give it a touch of originality.  You might well be familiar with it’s appearance in comics especially.  It shows up, for example, in Alan Moore and Kevin O’Neill‘s The League of Extraordinary Gentlemen, a story of a group of late-Victorian characters (many with mad-scientist origins) who group together to fight the enemies of the British Empire.  The Invisible Man is one of them.  He is first “seen” in the series in a girls school, busily having his way with the students (some of whom, impregnated, interpret their experiences as divine visitations).

And of course there is also always that classic of European comic-book erotica, Milo Manara‘s Butterscotch, which has a merry time with the whole Invisible Man theme. 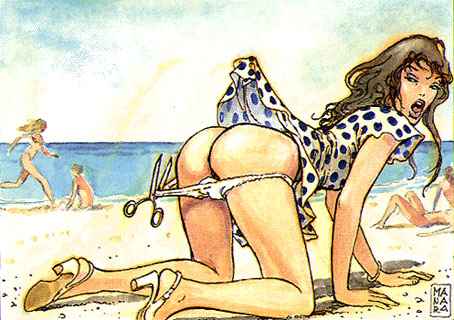 As with so many kinks, the roots of this one turn out to be ancient.  Remember that we have asked before the question about why people put so much energy into thinking about possible morality-free zones?  Well, as it turns out, people in fifth and fourth century B.C.E. Athens were thinking about this as well.    In Book II of Plato‘s Republic, Glaucon, a young companion of Socrates, challenges Socrates on the value of justice using — you guessed it! — a story about an invisible man.

According to the tradition, Gyges was a shepherd in the service of the king of Lydia; there was a great storm, and an earthquake made an opening in the earth at the place where he was feeding his flock. Amazed at the sight, he descended into the opening, where, among other marvels, he beheld a hollow brazen horse, having doors, at which he stooping and looking in saw a dead body of stature, as appeared to him, more than human, and having nothing on but a gold ring; this he took from the finger of the dead and reascended. Now the shepherds met together, according to custom, that they might send their monthly report about the flocks to the king; into their assembly he came having the ring on his finger, and as he was sitting among them he chanced to turn the collet of the ring inside his hand, when instantly he became invisible to the rest of the company and they began to speak of him as if he were no longer present. He was astonished at this, and again touching the ring he turned the collet outwards and reappeared; he made several trials of the ring, and always with the same result-when he turned the collet inwards he became invisible, when outwards he reappeared.

So now Glaucon, who’s clearly been giving the matter a lot of thought, quickly jumps into the “invisible man having sex” theme, before swiftly moving into the more philosophical challenge.

Whereupon he contrived to be chosen one of the messengers who were sent to the court; where as soon as he arrived he seduced the queen, and with her help conspired against the king and slew him, and took the kingdom. Suppose now that there were two such magic rings, and the just put on one of them and the unjust the other;,no man can be imagined to be of such an iron nature that he would stand fast in justice. No man would keep his hands off what was not his own when he could safely take what he liked out of the market, or go into houses and lie with any one at his pleasure, or kill or release from prison whom he would, and in all respects be like a God among men. Then the actions of the just would be as the actions of the unjust; they would both come at last to the same point. And this we may truly affirm to be a great proof that a man is just, not willingly or because he thinks that justice is any good to him individually, but of necessity, for wherever any one thinks that he can safely be unjust, there he is unjust. For all men believe in their hearts that injustice is far more profitable to the individual than justice, and he who argues as I have been supposing, will say that they are right. If you could imagine any one obtaining this power of becoming invisible, and never doing any wrong or touching what was another’s, he would be thought by the lookers-on to be a most wretched idiot, although they would praise him to one another’s faces, and keep up appearances with one another from a fear that they too might suffer injustice.

Whole text available here, in case any of you want to see how it ends.