I started writing this post because I was pondering Dolly Gibson’s misadventures in Where Am I? and wondering about possible inspirations for a storyline in which a head is separated non-fatally from a body.  Something did come up, and I hope it’s of interest, but I have to get there with a bit of a digression.

Now normally decapitation is a means of death, is indeed almost symbolic of death most inescapable.  And death means the end:  in Hamlet’s fictional universe it is the undiscover’d country from whose bourn no traveller returns.  But in mad science, and therefore in the Gnosis universe, death has become something more of an exotic tourist destination, as Iris Brockman herself could tell you from lived (?) experience.

And that’s no coincidence.  Dead matter turned living is a core topos of mad science.   We can go all the way back to Ovid‘s Metamorphoses for the appropriate inspiration if we like.

I’m not as good at Latin as I really ought to be, so I’ll rely on A.S. Kline‘s prose translation:

As yet there was no animal capable of higher thought that could be ruler of all the rest. Then Humankind was born. Either the creator god, source of a better world, seeded it from the divine, or the newborn earth just drawn from the highest heavens still contained fragments related to the skies, so that Prometheus, blending them with streams of rain, molded them into an image of the all-controlling gods. While other animals look downwards at the ground, he gave human beings an upturned aspect, commanding them to look towards the skies, and, upright, raise their face to the stars. So the earth, that had been, a moment ago, uncarved and imageless, changed and assumed the unknown shapes of human beings.

Prometheus takes dead matter and makes it living, in forms that resemble the very gods themselves.

And then when H.P. Lovecraft choses to parody Frankenstein, he will create a story called “Herbert West–Reanimator,” (Wikisource text here), in which the mad science gets even madder, and in which of course a decapitation features prominently and then, of course…

…exploitation filmmakers get hold of the concept and push it still further, resulting in an extraordinary mad science movie. 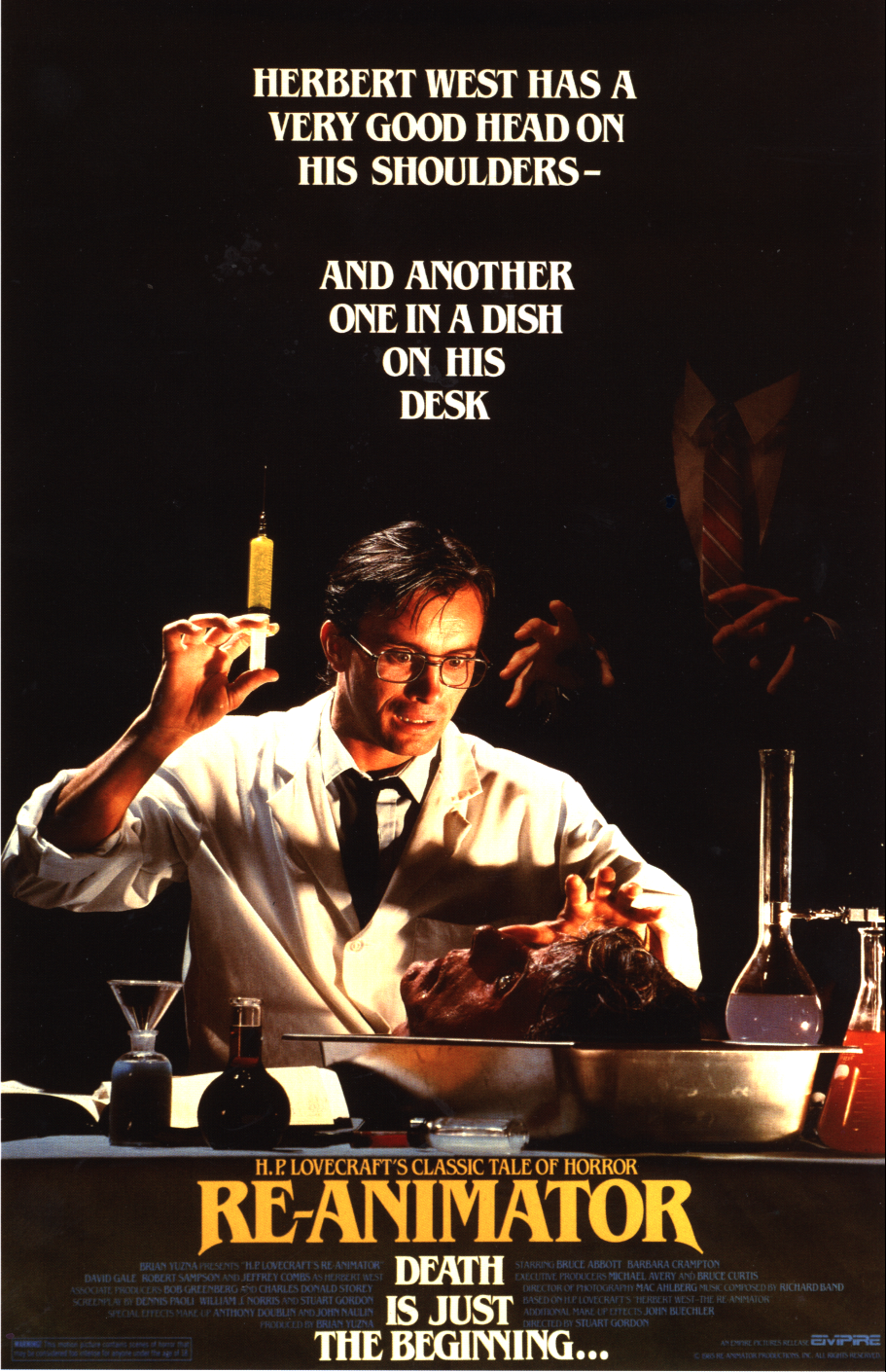 Dead matter becomes living in an amazing way.  And of course, there is a head in a dish on a desk.

But that’s not all.  While Ovid is lofty mythology and Mary Shelley is high literature and even Lovecraft writing a story that seems full of his own neuroses (his story contains racist elements that really burn, I’ll have you know), kickass filmmaker Stuart Gordon is clearly going in his own direction here — a direction that brings the whole dead-matter-is-living and decapitation-is-not-the-end thing right into Dr. Faustus territory with what tireless reviewer El Santo identifies as “what could be the most disturbingly vile sexploitation-horror set-piece of its era.”

Yes.  And it wouldn’t be EroticMadScience if we didn’t dwell on that a little, at least below the fold.

Doomed love-interest Megan Halsey (played with scream-queen panache by Barbara Crampton)  is abducted by the reanimated-by-Herbert-West corpse of her own father and strapped to a table in a morgue.   The decapitated-but-reanimated head of Dr. Carl Hill (played by actor David Gale), a serious creep in real life and even worse now that he’s technically dead, sits in a dissecting tray nearby. 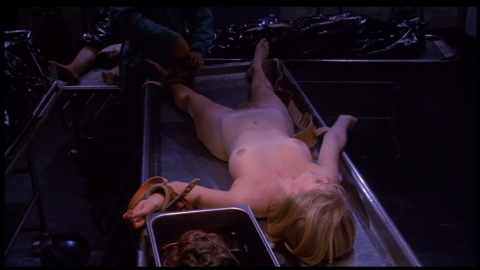 Dr. Hill seems strangely pleased by the circumstances he finds himself in. 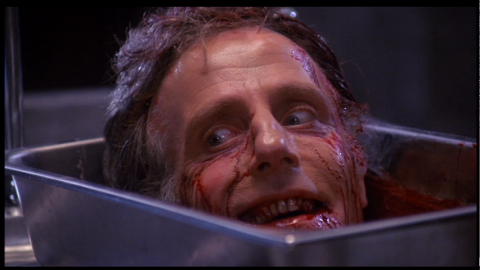 Long ago I recall an episode of Beavis and Butt-Head in which Butt-Head, the very-slightly-less-dim of the duo explained to Beavis an important principle of music video construction.  “You dumbass,” Butt-Head expounds, “when you see a sledgehammer and a T.V. set in the same music video, you know the T.V. is gonna get it.”  And I guess we have to say that an analogous primple applies here:  when you see a naked girl strapped to a table and a sentient lustful head in a dissecting tray on the same table, you  know that… 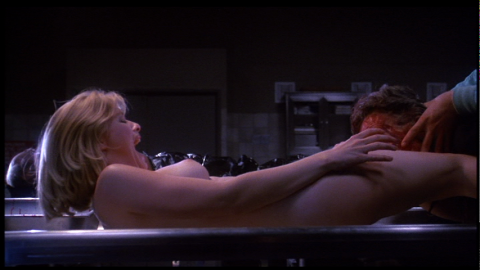 Beware decapitated sentient heads.  They can be a real problem.