One might criticize EroticMadScience for being a little to much inside the hetero male gaze, and that criticism, I fear, would be sound.  So a little relief therefrom (I hope) following the theme of bringing light to the world, which I explored a bit a few days ago. 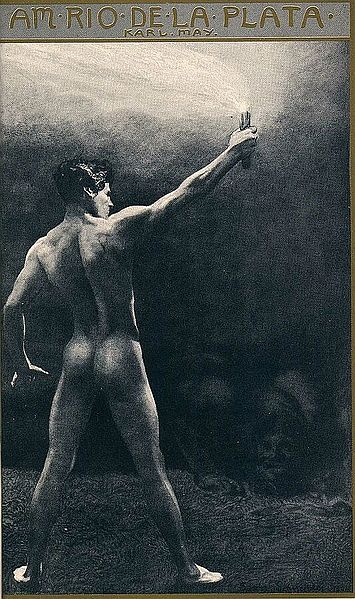 An illustration cover to a an 1894 novel by Karl May (1842 – 1912), a very prolific German-language writer, many of whose stories were set in an imagined American West.  May was immensely popular in his day:  his reputation is done a grave injustice by the fact that Adolph Hitler liked his books (which, as far as I know, provide no support for Nazi doctrines — note that Albert Einstein was also a major fan of May).  I haven’t been able to find much about this particular cover, although there is some interesting French-language commentary on its homoerotic implications here [Faustus May 11, 2018. I can no longer find the original post, but the blog of which it was a part is preserved in the Internet Archive].