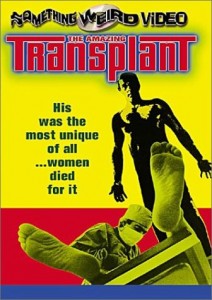 Strange filmmaker Doris Wishman (1912-2002) certainly deserves a place of honor in the pantheon of weird cinema.  The unusual fact that she was a woman filmmaker who worked in both sexploitation and hardcore (the latter featuring the transcendent Annie Sprinkle) would get her in the door here.  But beyond that, ho would have thought not just to make a nudie-cutie movie, but try to make a sci-fi nudie-cutie movie (really, see Nude on the Moon [1961]).  Or not just to cast a voluptuous star, but the cartoonish (as in 73″) Chesty Morgan in not one but two movies.  (Really!  There’s Deadly Weapons [1973] in which Chesty uses her endowment as a means of assassination, and Double Agent 73 [1974], in which she has a camera installed in, well, you can guess where.)

So obviously it’s worth a look-in to see if there’s some mad science in the œuvre of this unequaled cinéaste.  There is, and it’s depicted just above, even if it is a little disappointing.

The Amazing Transplant is the story, told mostly in a curious unravel-the-mystery flashback structure, of one Arthur Barlen, a shy young man who blackmails a surgeon into transplanting his deceased friend Felix’s superior (supposedly, we don’t really get to see) male member onto him.

This little bit of mad-ish science certainly helps Arthur with certain confidence issues.  For one, it gives him the strength to proposition his sort-of girlfriend, a young woman who appears to enjoy sitting around playing the zither in the nude. 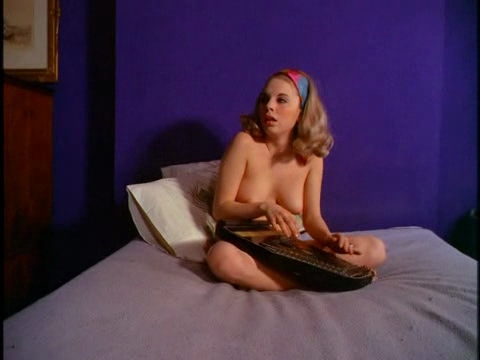 Unfortunately young Arthur has to live with a cinematic conceit that goes back at least as far as The Hands of Orlac (1924), which is that along with transplanted organs comes transplanted bits of personality, and it turns out that the late Felix was characterized by a rather specific and powerful fetish which poor Arthur is ill-equipped to handle.  Things do not go well…

It’s probably best to read this movie as a sort of commentary on the fetishistic nature of male sexuality, at least as perceived by Wishman.  It’s also an opportunity to look at some really hideous interior design.  The doctor’s office, for example: 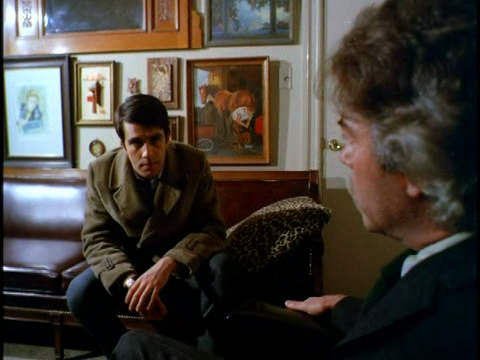 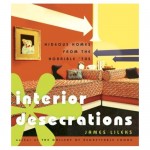 I swear, James Lileks could have put together an entire extra chapter of his book on how truly awful interior decoration was in the 1970s just by taking screenshots from this movie.

The mad science quotient is surprisingly low given the movie’s medical-horror premise.  We get some very simple operation scenes, and little else. 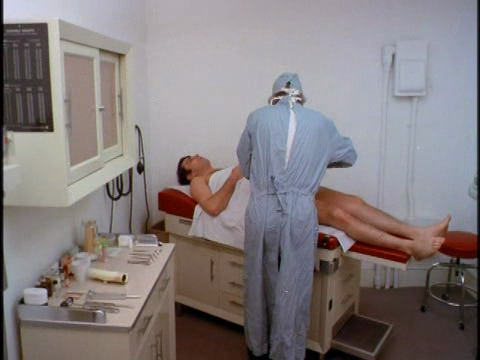 Probably not a hit unless you’re a Doris Wishman completist or really into movies about penises.  Something Weird does offer an edition.