Humpp was originally an Argentinian movie called La Venganza del Sexo written and directed by Emilio Vieyra picked up by an American distributor who padded it out with additional softcore footage, dubbed it into English, and retitled it before release.  (That release is now available from Something Weird Video.)  The result is an often-tedious production (I was fast-forwarding through even more softcore than usual) that has moments of levity when the English-language dubbing conflicts with the film’s manifestly hispanophone setting.

The core plot shouldn’t detain us long  (you can get a more complete synopsis here):  people engaged in various sex acts are being abducted by grotesque figures.  The police are baffled, by an enterprising reporter whom I shall call Journalist Guy has a theory that a mad doctor previously active in Italy is somehow involved.

Journalist Guy tracks his quarry to a hard-to-find estate somewhere outside whatever city this movie is set in.  He is captured within about fifteen seconds of doing so and, unsurprisingly, is compelled to participate in weird experiments.

The apparent antagonist here is one Dr. Humpp who, to give credit where do, does maintain a pretty good-looking mad-lab given the film’s obviously small budget. 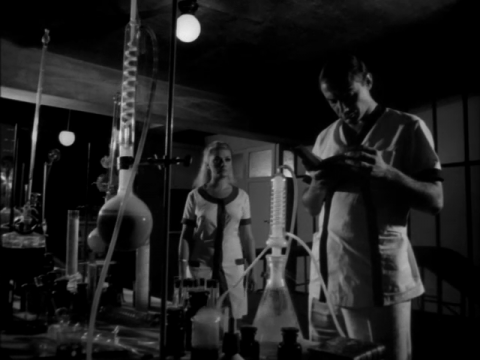 Humpp is compelling or inducing his victims to have lots and lots of sex and then extracting chemicals from them, some of which he then injects into himself. Humpp’s apparent motivation for this at this stage of the movie is some sort of vampirism: the chemicals keep him alive, young, healthy, etc.

In this experiment, he’s wired Journalist Guy and a Girl Victim up in some sort of apparatus. 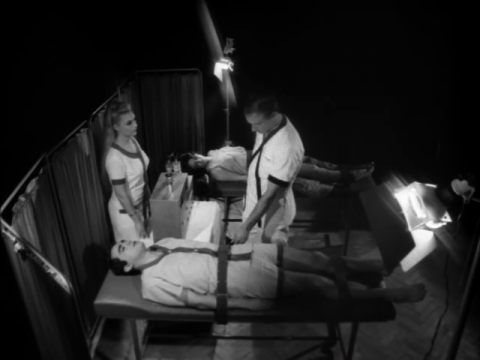 Humpp explains that they are about to have virtual sex:

And now I’m going to conduct a final experiment on electronic control of the male and female libido.

Do not resist.  You’ll possess that girl.  You’ll do everything to her that a man can.

You’ll respond to him.  He will excite you in every way his libidinous imagination can evoke. He will drive you to climactic frenzy, yet your bodies will never touch.

And they do.  Their experience is represented in a not-too-bad visual montage.

The success of this experiment allows Humpp to give us an exultant mad science line, one which no reviewer can resist quoting:

Sex dominates the world, and now I dominate sex!

But later on, because he’s our hero and because the plot requires him to, Journalist Guy manges to get out of confinement and find his way into Humpp’s laboratory.  Picking up one of Humpp’s notebooks, he finds out that Humpp’s project goes beyond personal vampirism.  It’s an entire Promethean enterprise, one explained by Humpp to the audience in a handy voice-over:

Science will soon be able to harness sex, the most potent force in humanity, to increase the mental and physical prowess of coming generations.  The virility of men must be increased and they must be mated with women of insatiable appetites.

Through electronic control of the libido we shall produce females capable of promiscuous and orgiastic encounters of infinite variety, producing nearly continuous concupiscent delights.

Wow! It’s a good thing that Hero Journalist is working to stop this, because it would be just terrible if that were to happen because…because…

Well, I’m sure there’s some reason why it would be just terrible, but I’m afraid I don’t know what it is. Maybe that Leon Kass character knows the answer. Anyway, I shan’t tarry over this deep philosophical problem, because it turns out that Humpp’s notes reveal something even stranger.

These discoveries were discovered by the brain of Dr. Puttagniello.

(My transcription here might not be entirely accurate as to the ur-scientist’s name, since as far as I can find there is no Italian surname “Putagniello” or close variants. Were they perhaps aiming at something like Dr. Puttaniere and missing? Maybe I’ve over-thinking this.)

Note that the helpful voiceover tells us that the discoveries were made by the brain of Dr. Puttagniello, not Dr. Putagniello. And as Journalist Guy soon finds out, this is not just overheated writing, but rather literal truth because Dr. Putagniello apparently is a literal brain in a jar on Dr. Humpp’s desk. 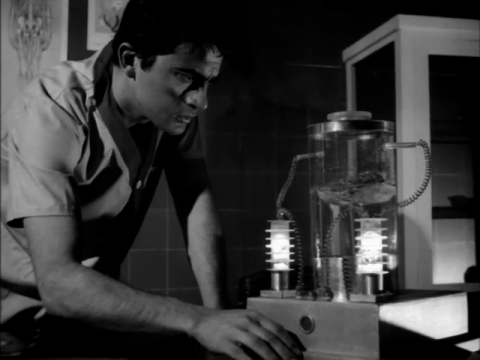 What self-respecting disembodied brain-in-a-jar mad scientist can be denied a rant of ver own?

Dr. Humpp is on the verge of a great breakthrough.  In his hands sex will dominate the world.  Try to stop him and you will die!

But, fortunately for morality and decency, Journalist Guy manges to summon the proper authorities in the end who storm the place. Dr. Humpp, denied his precious fluids promptly rots away. Brain in Jar is predictably outraged.

What have you done you idiots?  Dr. Humpp was my bodily instrument for finding eternal life for all of mankind.  Just as I was preserving his life by the use of blood forces of sex, he was preserving my life.  We were vital to each other!  Idiots!  Arrgh!!!

And then for no obvious reason except frustration, Brain in a Jar bursts into flames. I guess this brain has serious anger management issues. 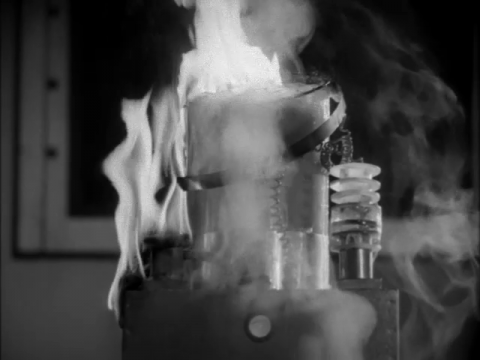 There is of course one final rant:

Without the powerful forces of sex we discovered, the secret of eternal life for everyone on earth.  Now, you have destroyed the dream of mankind forever.  You will be mortal!

Oh, so that’s what was at stake here. I guess “try to stop him and you will die” was therefore not a threat but a prediction. Well then, Nice Job Breaking It Hero.