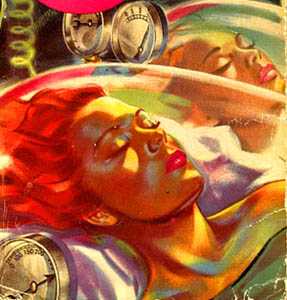 The context for these is a page at the site Project Rho, devoted to the problem of space travel, and how damn difficult it would be to stay alive long enough to actually get anywhere.  One possible solution:  freeze yourself, which is of course especially appealing if you are an attractive female and freeze yourself in a tube.  An illustration to Frozen Limit by “Volsted Gridban” (I think actually John Russel Fearn, another British sci-fi writer.) 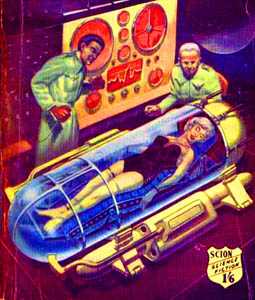 A disadvantage of suspending your animation would appear to have been that you might have missed out on exciting events in your vicinity. 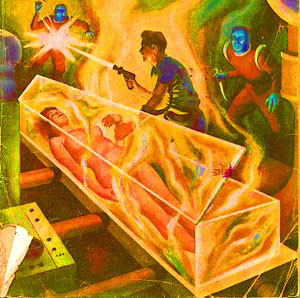 Another illustration, this I think from a story “Newscast” by Harl Vincent that ran in Marvel Science Stories, April/May 1939. 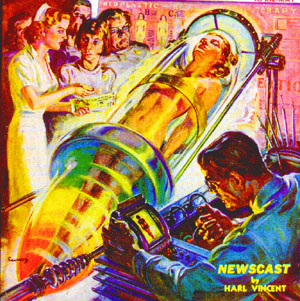 Trying to research the last turned up a bonus tube girl illustrating the Wikipedia article: 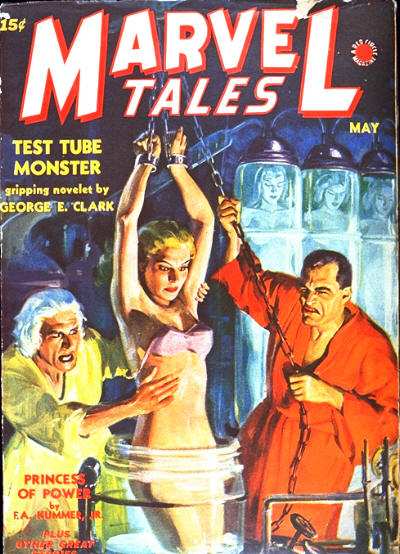 The author of the Project Rho page remarks, perhaps a little apologetically, “I did not intentionally limit these illustrations to just frozen women. Apparently the artists of the time were not interested in painting men under glass.”  Well, let’s not be too sure.  I suspect rather that it was an audience consisting of hetero men and boys that wasn’t interested in looking at men under glass.  As for what might have been in the artists’ private sketchbooks, I do not know.

Though I really wish I did.