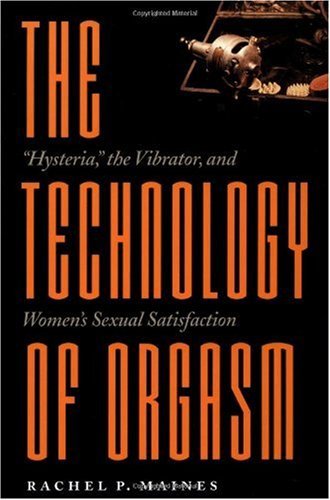 Many readers of this blog, I hope, will be familiar with a certain work by historian of technology Rachel P. Maines called The Technology of Orgasm:  “Hysteria,” the Vibrator, and Women’s Sexual Satisfaction. If you’re not familiar with it, you might owe it to yourself to head down to your local library and check it out.  Short summary:  in 1970s, when Dr. Maines was reading turn-of-the-century women’s magazines in the course of researching a rather different topic in social history, she kept coming across advertisements for what were clearly (gasp!) electric vibrators.  What was going on here?  Well, it turns out that physicians for a long time had a lucrative practice in performing massages of women’s genitals for the treatment of “hysteria,” which in reality meant that they were manually stimulating women to orgasms that they presumably weren’t getting by other means in their repressive Victorian and Edwardian environments.  (Cf. Honoré de Balzac:  “The majority of husbands remind me of an orangutan trying to play the violin.”)  It had to be physicians, because of course no one could just come out and admit that women were paying for sexual pleasure.  No indeed:  must honor those puritanical sexual norms by providing what Dr. Maines calls “social camouflage,” here by pretending that women’s lack of orgasms was a medical condition requiring treatment by a doctor.  The only catch was that doctor’s didn’t actually like performing this service all that much, and so once someone finally invented a small electric motor, it was technology to the rescue in the form of the vibrator!

So it was a great pleasure for me when I stumbled across a bit of video of Dr. Maines recently discussing recent advances in sex technology, like Real Dolls and newfangled sex toys.  (Link here in case the embedding doesn’t work for you.)

What struck me most of all his just how funny much of this came across as being.  Especially the bit in which Dr. Maines comments about how “you’ve got something hot and something wet and…electronics and those are not a good combination.”