You might recall a warning from a few days ago that when you go fetish fuel mining in old pop culture you might get a bit dirty.  That’s sort of how I feel about today’s post, but somehow I can’t resist the underlying material all the same.

The character of Fu Manchu is one of the earlier characters one might call a supervillain.   He was created in 1913 by the English novelist Sax Rohmer (1883-1959), and he must have scared the willies out of contemporary audiences as the embodiment of some rather deep fears.  As Rohmer’s protagonist Nayland Smith described him in The Mystery of Dr. Fu-Manchu:

Imagine a person, tall, lean, and feline, high-shouldered, with a brow like Shakespeare and a face like Satan, a close-shaven skull, and long, magnetic eyes of the true cat-green. Invest him with all the cruel cunning of an entire Eastern race, accumulated in one giant intellect, with all the resources, if you will, of a wealthy government—which, however, already has denied all knowledge of his existence. Imagine that awful being, and you have a mental picture of Dr. Fu-Manchu, the yellow peril incarnate in one man.

The instance I have in mind here is The Mask of Fu Manchu (1932).  The plot revolves around the struggle between a group of British archaeologists and Fu Manchu over possession of a mask and scimitar that supposedly belonged to Genghis Khan.  Fu Manchu believes that with them he can be recognized as the new Genghis Khan and rouse the masses of Asia to rise up and wipe out the white people of the world.  Because of course everyone in Asia can instantly recognize centuries-lost artifacts as genuine on sight, right?  Hey, I didn’t say the plot had to make any sense.  What I’m here for is the erotic mad science.

Which we get in satisfying doses, this being a pre-Code production.  Fu Manchu is in fact an accomplished scientist, possessing at doctorates in “philosophy from Edinburgh, law from Oxford, and medicine from Harvard.”  (In spite of this, not a single white character in the movie addresses him as “Dr. Fu Manchu.”  That’s a jerk move on their part.  I’ll take the opposite tack and pay him the respect one man of learning owes another and include his honorific for the rest of the post.)   He’s played  by Boris Karloff, who, while he doesn’t look noticeably Chinese, at least can be said to have appeared on this site before.    Also, he gets the mad science thing going good, testing a candidate scimitar with the power of SCIENCE. 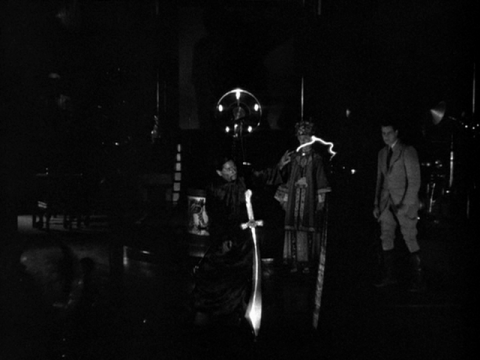 And Dr. Fu Manchu also has a daughter, Fah Lo See, played by Myrna Loy, who’s also not noticeably Chinese, but at least is fun to watch.  Especially when she’s supervising the flogging of one of the English guys, which I must say, she really gets off on. 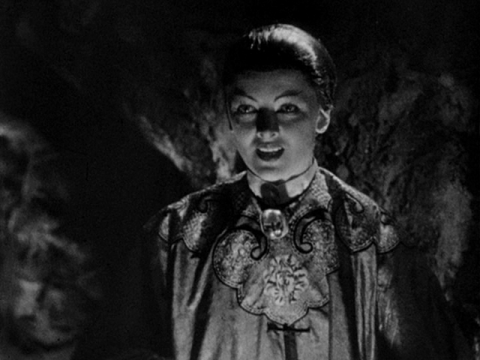 We also get to see Dr. Fu Manchu show off his surgical skills when he injects flogging-guy with a mind control drug.  I’ve seen a commenter who identifies the scene in which it happens as “the most homoerotic surgery scene I’ve ever seen.”  I must say I’m hard-pressed to disagree. 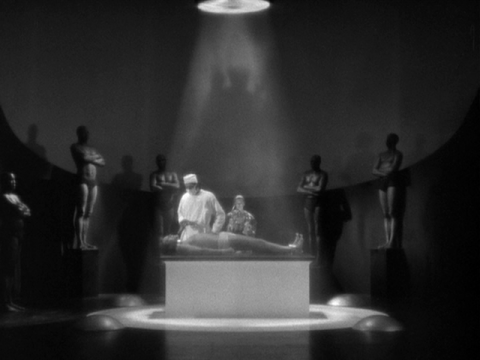 The guys standing around in short-shorts are big-muscled African men.  Since the action for this film is set deep in the interior of China in 1930s, I’m not really sure exactly how Dr. Fu Manchu managed to recruit them.  Perhaps there was some sort of special agency for that.  I’m also not sure why they have to stand around like that, although they sure look cool doing it.

So anyway things spiral downward for the British Empire as Dr. Fu Manchu manages to capture the pretty blond (of course) girlfriend of our hero and set her up for a blood sacrifice (of course). 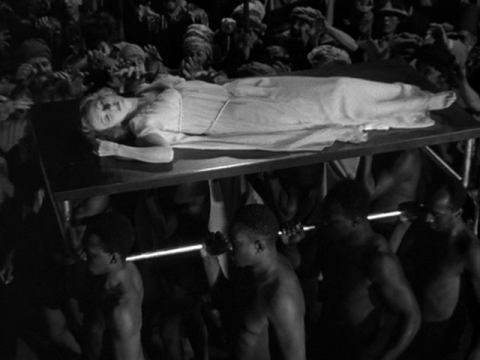 And at this point the filmmakers really pull out the racism stops with the “dirty foreigners are after our wimmenfolk” trope.  To wit:

Would you all have maidens like this for your wives?

Then conquer and breed!  Kill the white man and take his women!

Well, naturally we can’t have that now, so Nayland Smith escapes from the overly-elaborate, easily-escapable deathtrap which the genius but not-genre-savvy Dr. Fu Manchu has placed him in and saves the day.

By using an energy weapon created by Dr. Fu Manchu to massacre a lot of Asian men who haven’t really done anything. We sure know where this movie’s value system is. 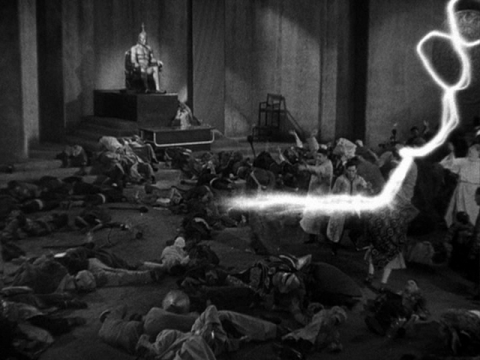 But of course, the awfulness can’t really stop there.  There’s a concluding scene on a ship back to England, in which Nayland Smith has a conversation with a steward who’s just arrived to inform everyone that dinner has been served.

(in an affected “Chinese” accent)

You aren’t by any chance a doctor of philosophy.

The Steward laughs and shakes his head in negation.

The steward shakes his head again.

But are you sure?

Then I congratulate you.

(walks off, banging a gong and calling out)

Yeah, yeah.  I get the point the filmmakers clearly wanted to make here.  Educated and competent Asian:  bad.  Servile and comical Asian: good.  And if you don’t believe me, take a look at the steward himself. 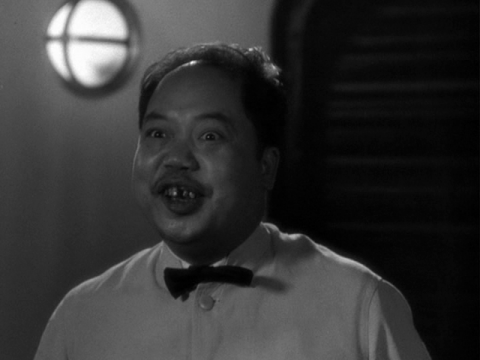 Do you think that there were no Asian actors in 1932 with decent dentition available, or was this some sort of casting choice meant to drive home a certain point?

You know, I’m beginning to sympathize with Dr. Fu Manchu’s point of view.   If I had to live in a world full of people who took this who think my role in life is to be servile and hold my life cheap because of my ethnicity, I’d be seriously pissed off as well. I wouldn’t go for genocide (I think — just how attractive are the enemy’s women again?), but a delivering a serious collective ass-kicking would be a formidable temptation. Evidence, perhaps, of  Dr. Fu Manchu as a mad scientist motivated at least some by woundedness.