Seeing as we’re in the week running up to Halloween (I have my mad scientist’s costume ready!) I’ll be running a series of mad-science related images, at least some of which might seem a little disturbing.  Provenance will be pretty variable.  Some I know well, and some are from dusty corners of my hard drive that I’d forgotten about until recently, and on which diligent image searching has failed to reveal much of interest.  I promise to do my best.

So let’s get Halloween Week underway, shall we?  Squick or Squee! 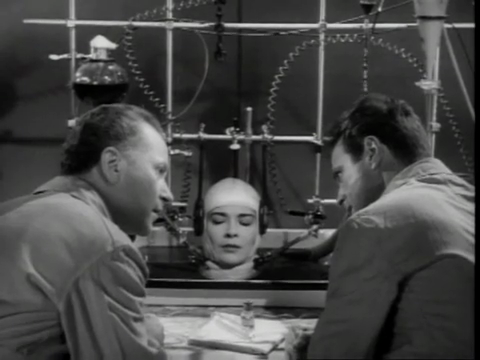 Yes, that really is a pair of mad scientists conferring over a woman’s head in a pan. 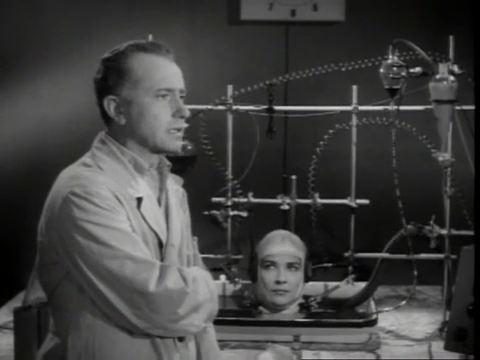 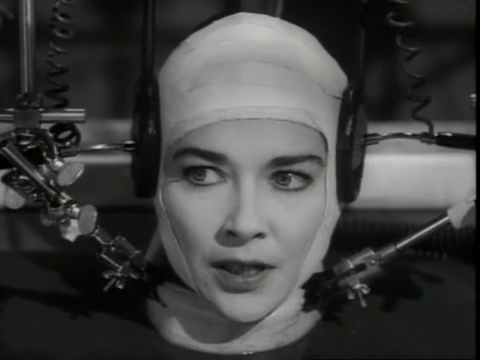 The more radical amputation fetishists should be squeeing, at least.  The screenshots are from The Brain That Wouldn’t Die (1959), a movie that’s gleefully demented and exuberantly sleazy in the same way Invasion of the Bee Girls or Humanoids from the Deep are, and thus a must-view for any thaumatophile.  It really probably deserves its own post, but the short summary of the plot is this:  Jan, the girlfriend of brilliant but ethically challenged Dr. Bill Cortner, is decapitated in a grisly automobile accident.  (Her body is burned beyond useful restoration.)  Dr. Cortner takes Jan’s severed head to the nearby country house where he is conducting his experiments, wherein he succeeds in reviving her (it?) in a pan of special fluids with the aim of keeping her alive while he goes out to troll for a new donor body.  It’s a brilliant plan except for two tiny flaws (1) Jan is very unhappy about what she’s been reduced to and (2) she’s figured out a way to communicate with the results of Dr. Cortner’s previous…experiments, which are locked in the closet of said country house.  Uh oh.

You can apparently see the whole movie at the Internet Archive (and excellent late-night viewing it is) here.  It was also the subject of one of Mystery Science Theater 3000‘s best sendups:  YouTube video appears to begin here.