I’ve reeived via my trusty courier the two episodes of a curious anime series called Cambrian, acquired by me because there was alleged to be some sort of mad science going on in there.  It was put out in mid-decade by Milky Animation, an outfit whose website is I think here.  Anyone out there with real Japanese literacy skills is of course welcome to correct me on this if I’ve got it wrong.

Yes, some.  On the surface this appears to be just a standard tits ‘n tentacles story, albeit a fairly compressed one containing only five characters of any consequence:  Senior Mad Scientist, Hot Lady Scientist, Junior Mad Scientist, Bad Girl, and Nerdy Assistant.    The opening scene has some appeal.  As best I understand it, Senior Mad Scientist has figured out some means of “speeding up” evolution through “radiation waves.”  Obviously evolution does not work the same in anime world as it does in the real world.  In the real world, evolution is a process through with there is differential success of replicators (genes, in the case of biological evolution), a blind, goal-free process which nonetheless results in various kinds of exquisite design.  In the anime world, by way of contrast, evolution is a goal-directed process.  And the τέλος at which this process is aimed is turning all creatures great and small into things very muscular, tentacular, and rapey.  (Ol’ Aristotle would have been so proud to see this philosophical development.)

So anyway we open with a pretty good lab scene.  Senior Mad Scientist has speeded up evolution and has a lab full of tubes of…well, I’m not really sure. 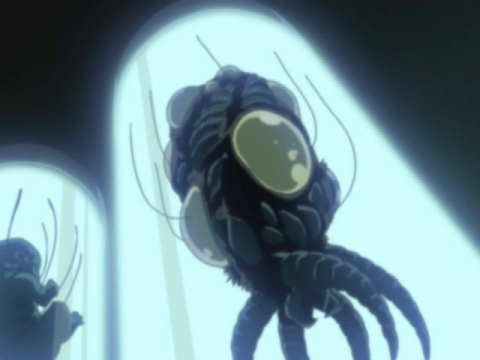 He analogizes his (rather questionable) achievement to the “Cambrian Explosion,” all the while addressing what appears to be a female experimental victim inside the lab. 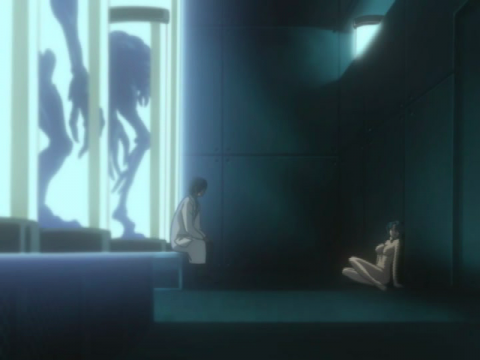