The Velvet View added to siteroll
Ayla's Nightmare by ecostar

It is with great pleasure that I can report that Circlet Press has now made available a new e-book version of M. Christian‘s short story collection, The Bachelor Machine. For thaumatophiles, it is a do-not-miss. 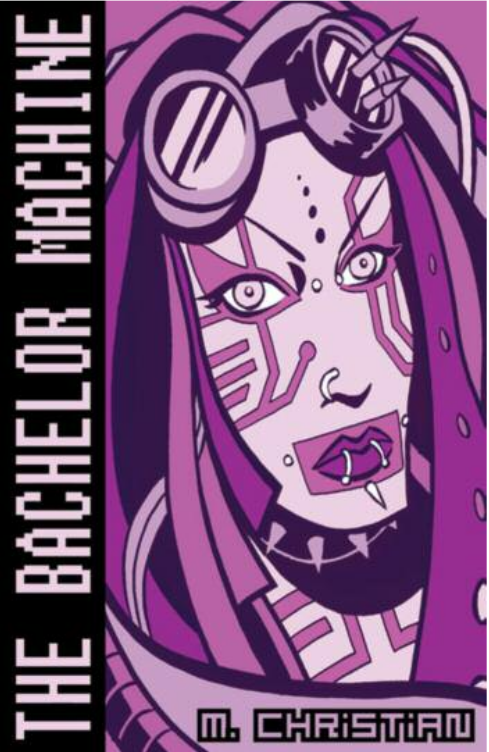 The new edition consists of nineteen stories and two appendicies from the 2003 on-dead-tree edition plus a new foreword.

Many — though not all — of the stories are set in a gritty cyberpunk world, one which at times makes even the imagination of William Gibson look somewhat tender by comparison.  Radical forms of body modification, virtual realities, biohacking, and so on are explored in all sorts of permutations of gender and practice, or beyond gnder and practice.  Some are just exquisite.  The backer’s tale “Heartbraker” plays like X-rated version of Ghost in the Shell.  I hope M. Christian will forgive me for offering a taste:

Their cunt was on fire—molten, their lips and their clit steamed in a thumping beat as both their bodies moved over each other. Nipples stroked across soft breasts, bellies glided on a sheen of fine synthetic sweat.Their cunt was rapidly melting in a pool of vibrating wine, a tub of jiggling butter. They weren’t just hot or steaming—they were burning in their roaring lust, combining in a echoing, reverberating bonfire. Linked, each hardwired into the other’s genitals, mixed and matched, they surged and merged.

(And if, after reading that, you don’t want to run out and buy this book right now, I should wonder what you’re doing on this blog.)

These are often edgy stories:  I am full of admiration for M. Christian’s willingness to “go there,” wherever “there” is.  Consider “Everything But the Smell of Lilies,” a story of a sex worker who has been modified so that she can be killed by clients who get off on that sort of thing has to be one of the squickiest things I’ve ever read…and read, and read, and read again.  So fair warning, these are not stories for the squeamish or the easily offended.   And they’re challenging in other ways as well, full of twists and non-conventional narrative structures and devices.  This is erotica for advanced readers.

And yet for all the edginess, for the cyberpunk grit and the sense of a brutal world, there are touching moments, bits of tenderness in the oddest of places.  The final story, “The Bachelor Machine,” about an encounter with a deteriorating, way-past-her-prime sexbot contains a twist that left me with a catch in my throat.  As usual, I won’t give it away.  But I shall urge you to read it yourself.  You can order a copy from Circlet here.