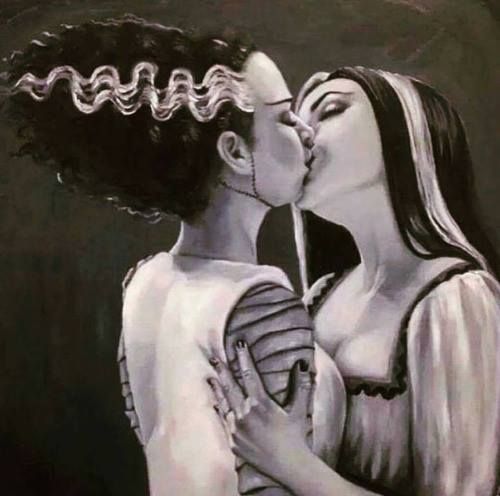 My original tumblr post was here. This photograph of a kiss between the Bride of Frankenstein and Lily Munster was originally posted on a now-deactivated tumblr and comes to us via gravewalk. Beyond that I have been unable to trace its provenance. 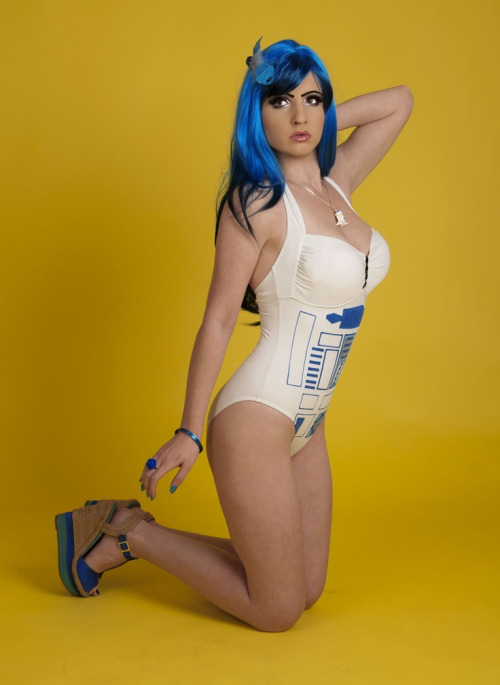 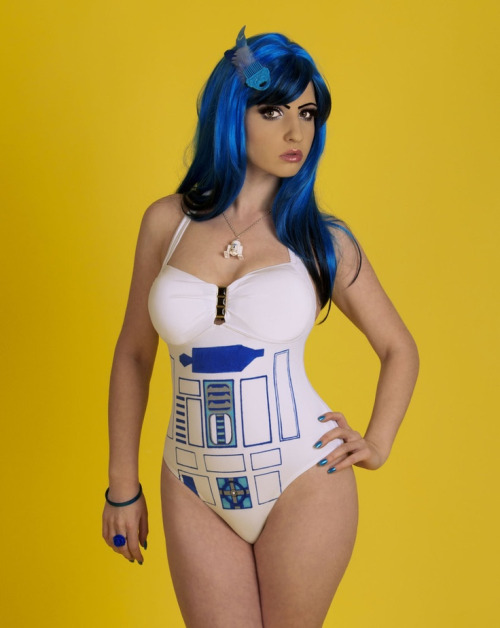 My original tumblr post was here. The original text:

R2D2 from Star Wars  by Ivytenebrae

The beginnings of a droid TF. Soon you will be able to check out her circuits under her new metal tummy unit. 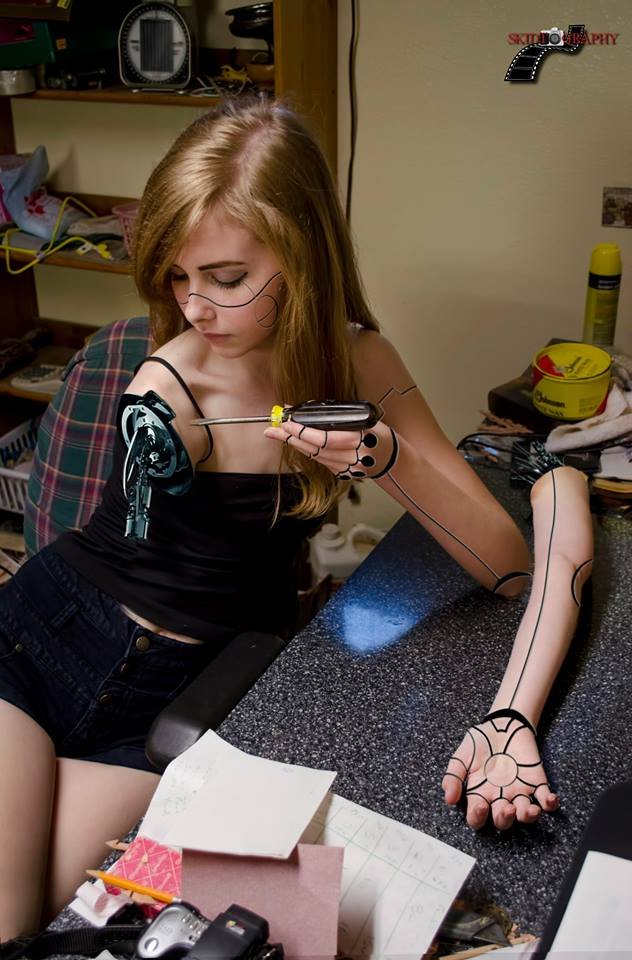 Original post here. This image was researched by Bacchus at ErosBlog as part of the “Γ commission.” The research was originally published at Hedonix as “Γ 043 – Emily Fixes Herself.” Here is what Bacchus found.

This image is from the Facebook presence page for Skidtography, the photography business of photographer Jason Skidmore. The photo is found here in the model gallery for Emily Erickson, along with one other photograph from this series: 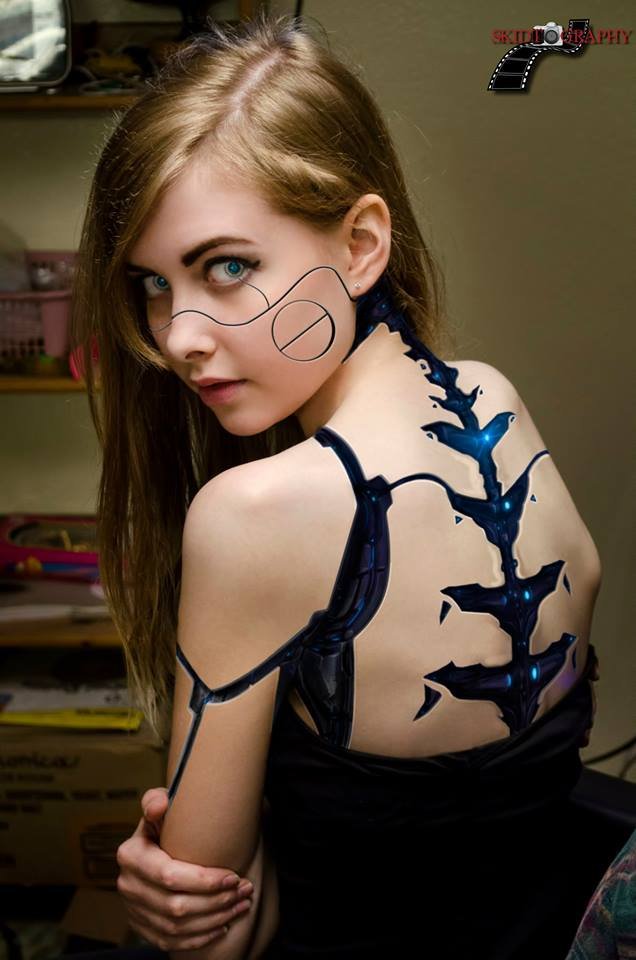 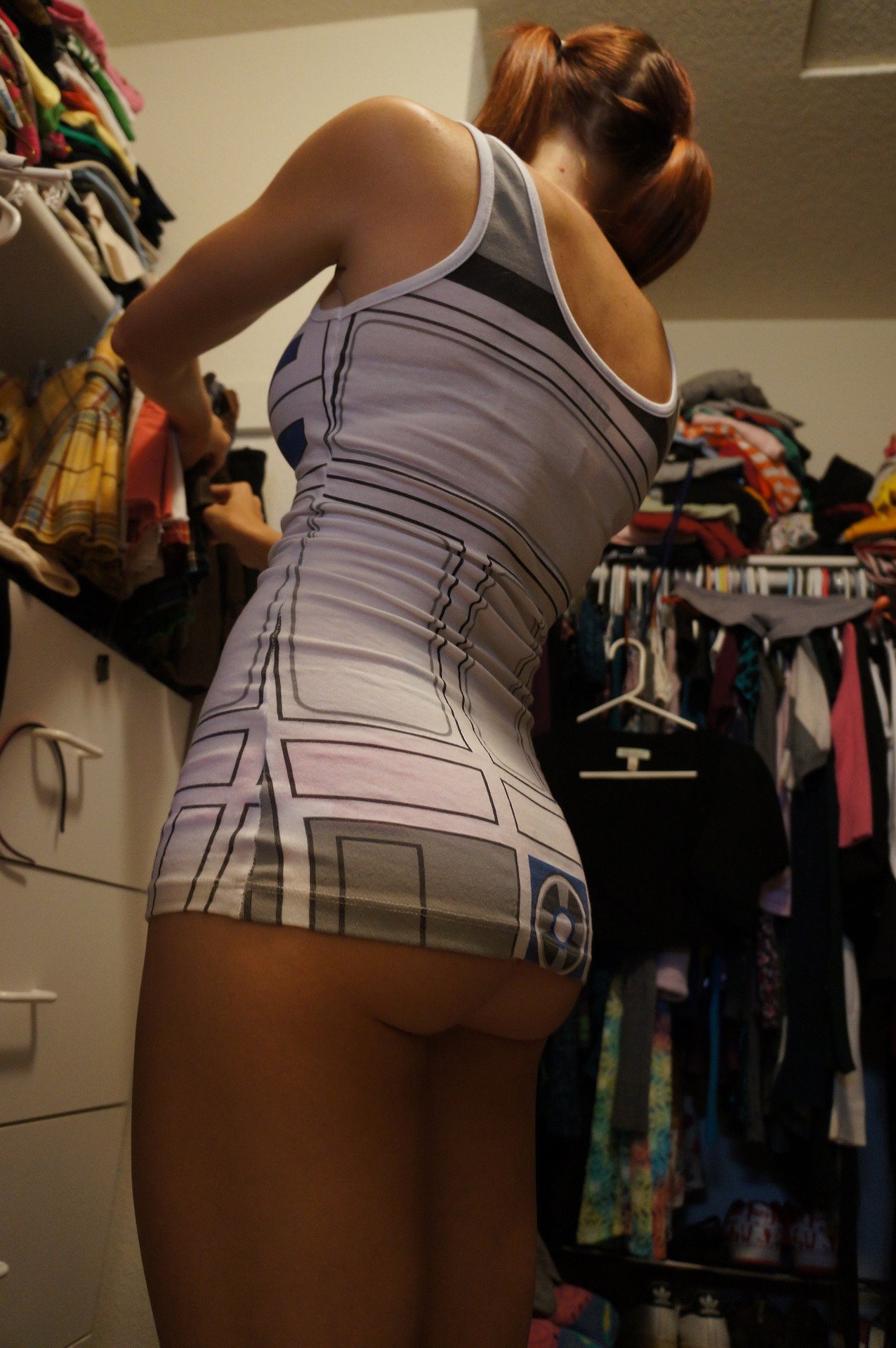 Original post here. This image was researched by Bacchus at ErosBlog as part of the “Γ commission.” The research was originally published at Hedonix as “Γ 036 – Sexy R2 Unit.” Here is what Bacchus found.

A commenter on an Imgur appearance of a slightly photoshopped version of this photo (one that artificially accentuates the visible portion of butt-cheeks) identifies this as a photo of Meg Turney, who is a cosplayer and internet personality. Although that’s a somewhat sketchy attribution to be sure, it’s given some additional weight by this stock photo of her appearing in the same R2-D2 dress at something called the Streamy Awards. Too, these Pinterest posts ( 1 2 ) feature demure-ish selfies of her in a closet in the same dress.

For interest, there is an entire Pinterest board devoted to women wearing versions of the R2-D2 dress. While browsing it, I discovered a captioned version of the subject photograph that asks the question you were probably asking also: 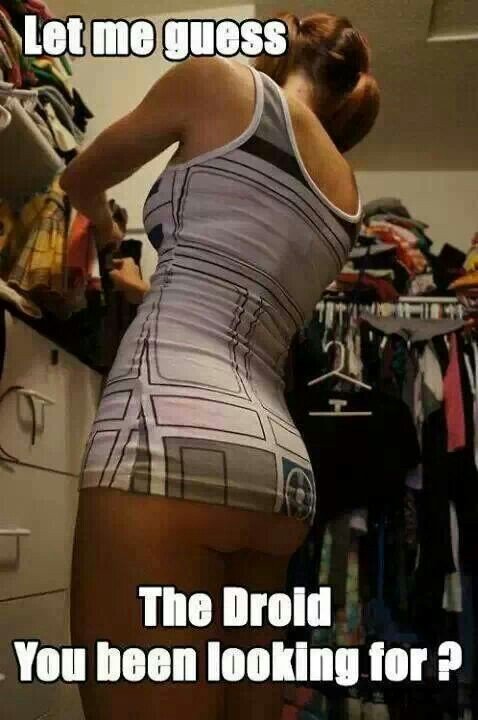 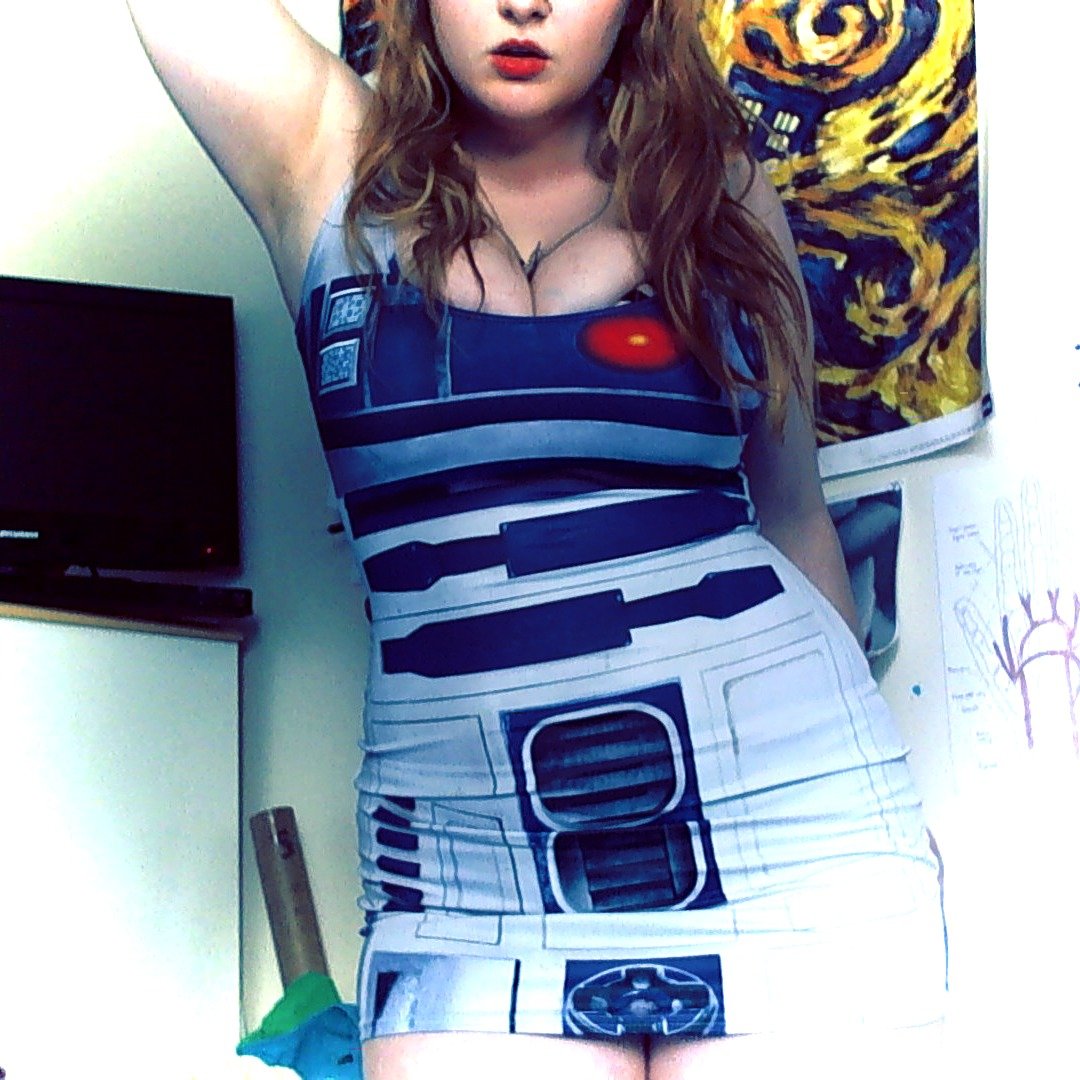 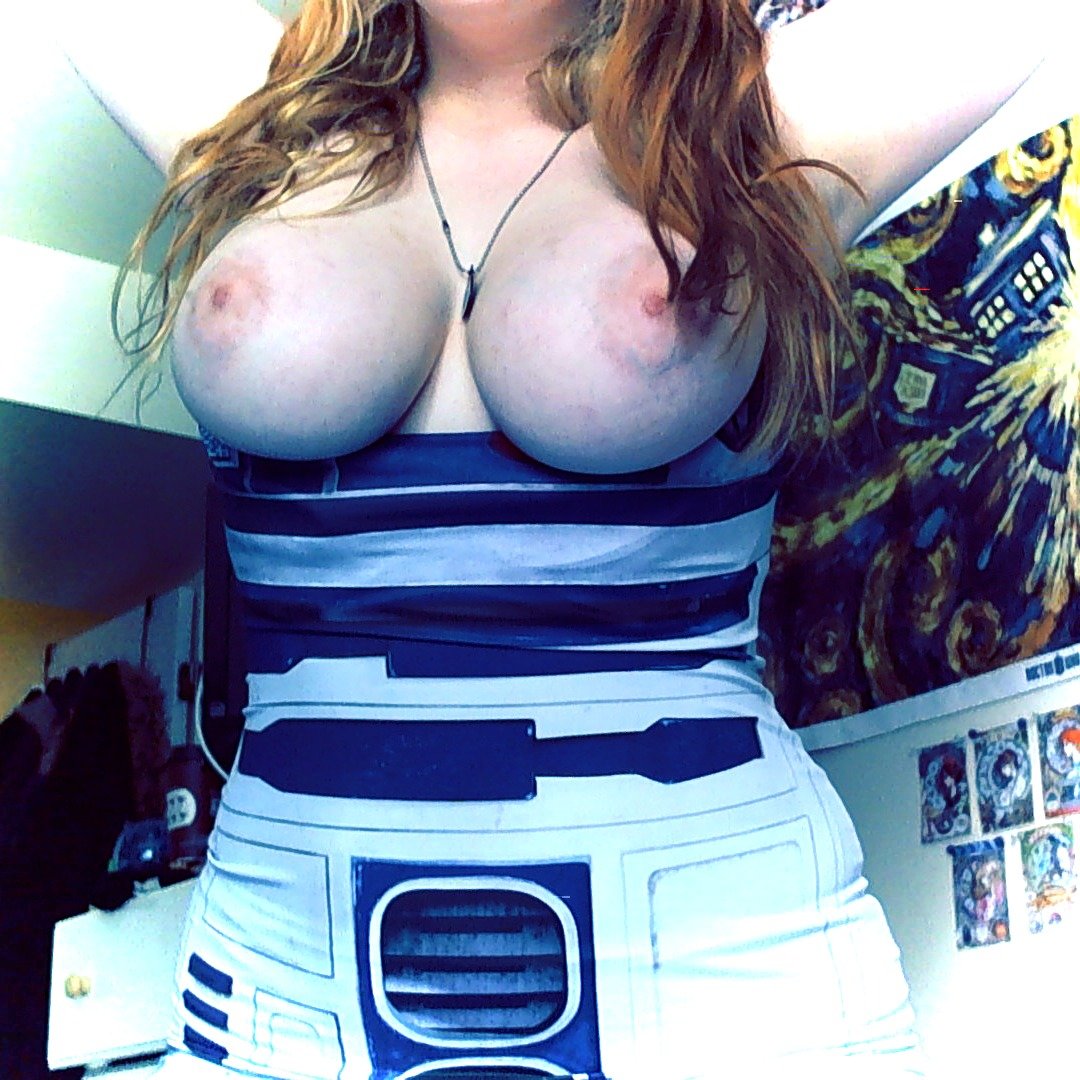 Original post here. This image was researched by Bacchus at ErosBlog as part of the “Γ commission.” The research was originally published at Hedonix as “Γ 022 – In And Out Of Her R2-D2 Dress.” Here is what Bacchus found.

These are images of “Kit” that she posted to her Switchy Little Princess tumblr (see her “Yours Truly” tag for more pictures of her). Her FAQ with more information about her is here; it’s notable for the advice “I got my followers by getting naked. Why don’t you try the same?” She would appear to be wearing the Artoo 2.0 digital print dress. 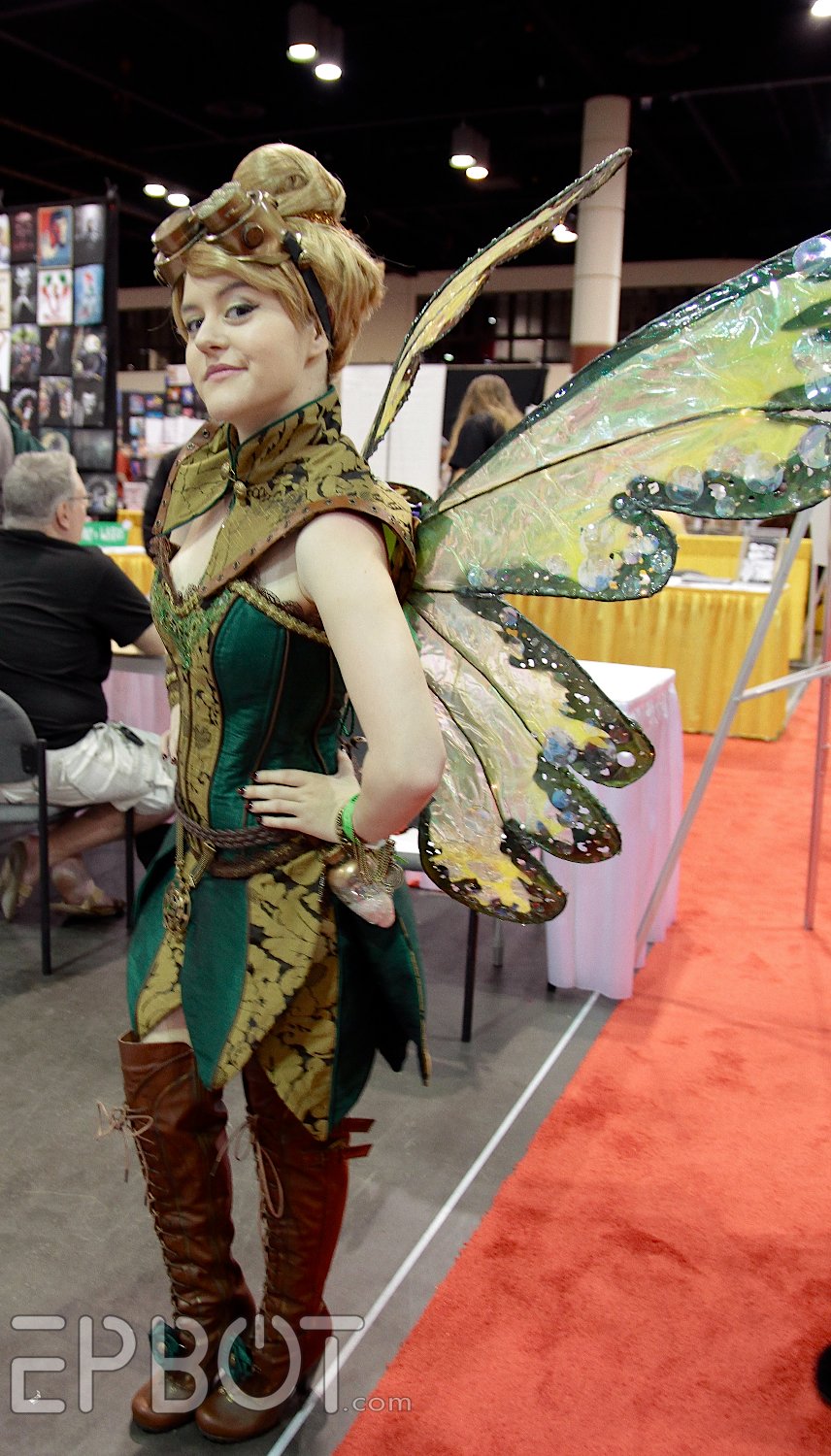 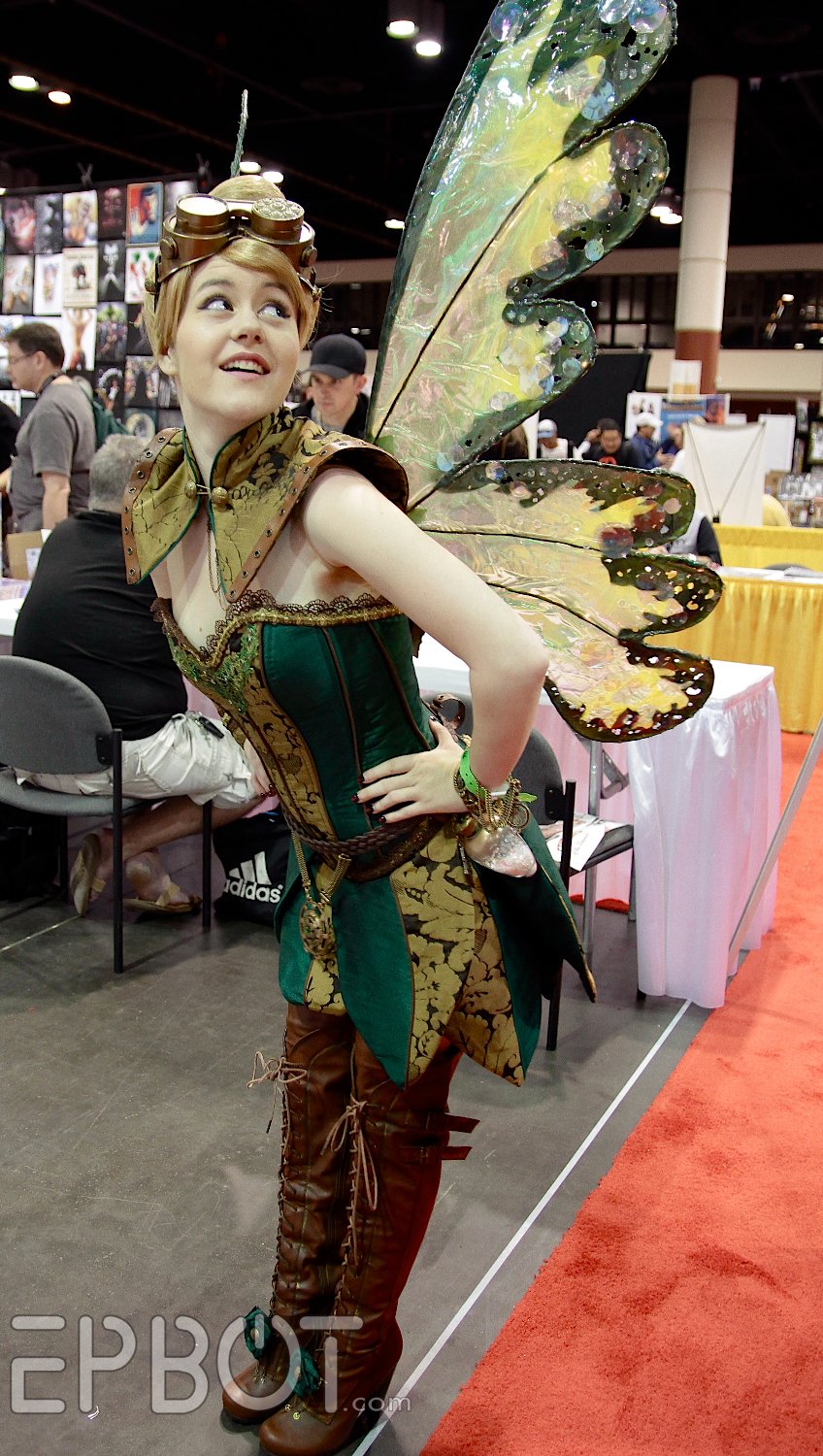 Original post here. These images were researched by Bacchus at ErosBlog as part of the “Γ commission.” They were originally published at Hedonix as “Γ 009 – Steampunk Tinkerbell Cosplay. Here is Bacchus’s research:

These images come originally from a post at EPBOT, where Jen writes about her visit to Megacon 2013 in Orlando, Florida:

I fangirled all over Steampunk Tinkerbell here, because I follow the maker of this costume, Firefly Path, on Facebook, and saw a few preview pics just the day before. If you love gorgeous costumes as much as I do, then you really should be following JoEllen’s work. As you can see, it is stunning. (This isn’t JoEllen in the pic, by the way; she’s just the one who made the entire costume, from boots to wings.)

The model in these pictures is Madeline Masquerade, a Vancouver model and cosplayer whose Facebook page features another shot of her in this Steampunk Tinkerbelle costume as her FaceBook avatar. The page also features this photo of her in the costume. On her Tumblr blog, Madeline strives to correct the Tumblr attribution-stripping one of the photos suffered:

I’ve been seeing this photo going around multiple facebook pages and tumblrs with no credit to the model and/or fabricator. A few blogs have even gone so far as to remove the photographer’s watermark. I thought I’d repost it with proper credit, as stealing images is not cool.

I agree. Stripping attribution is not cool. That’s why I pay Bacchus to put it back! 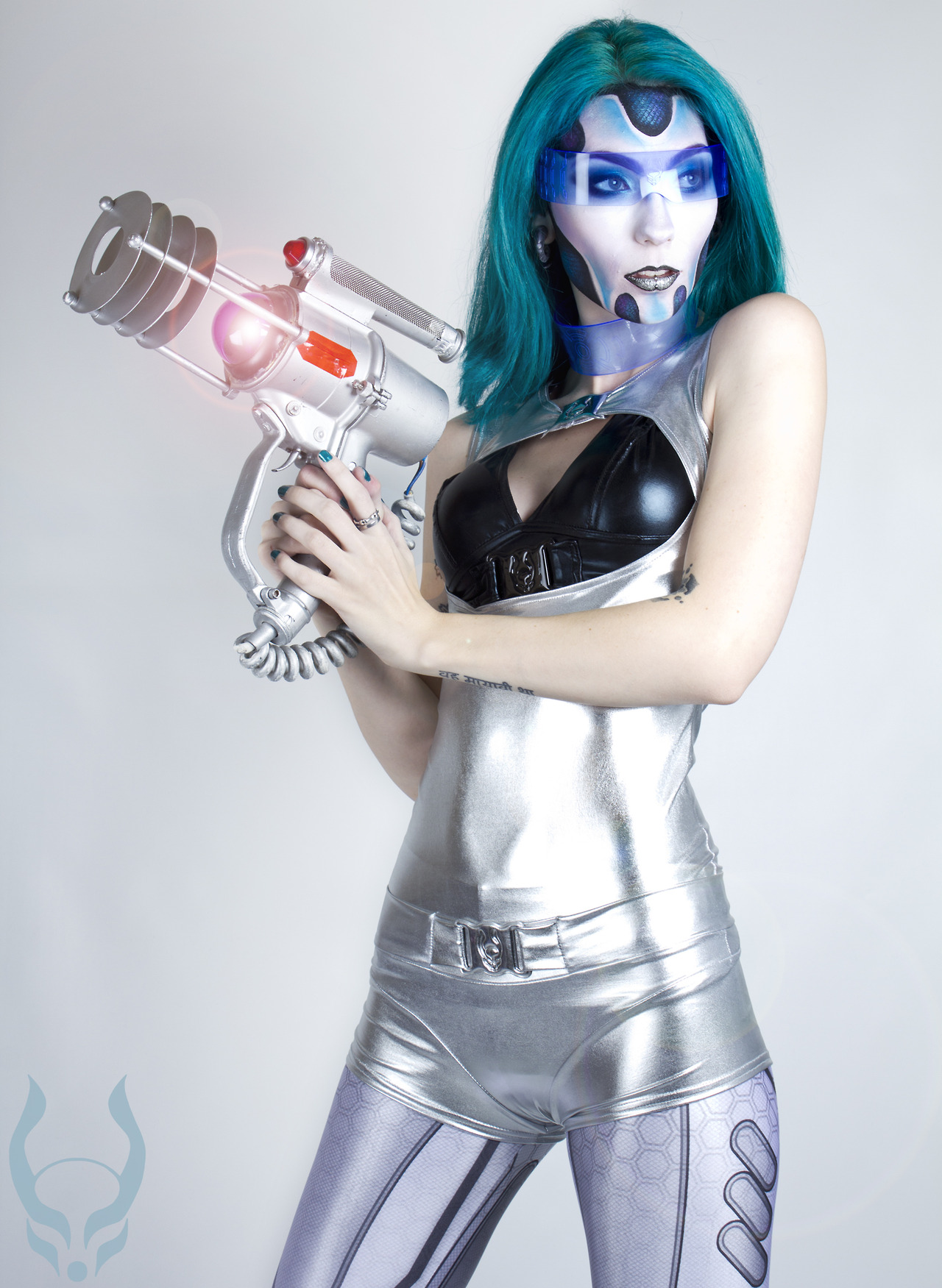 Stuck for Halloween ideas? Cyborg is a popular choice in Camden!

The mask Xenobia finds is modeled on that worn by Edith Scob in Les yeux sans visage (1960), which is a definite must-watch for the mad science fan. 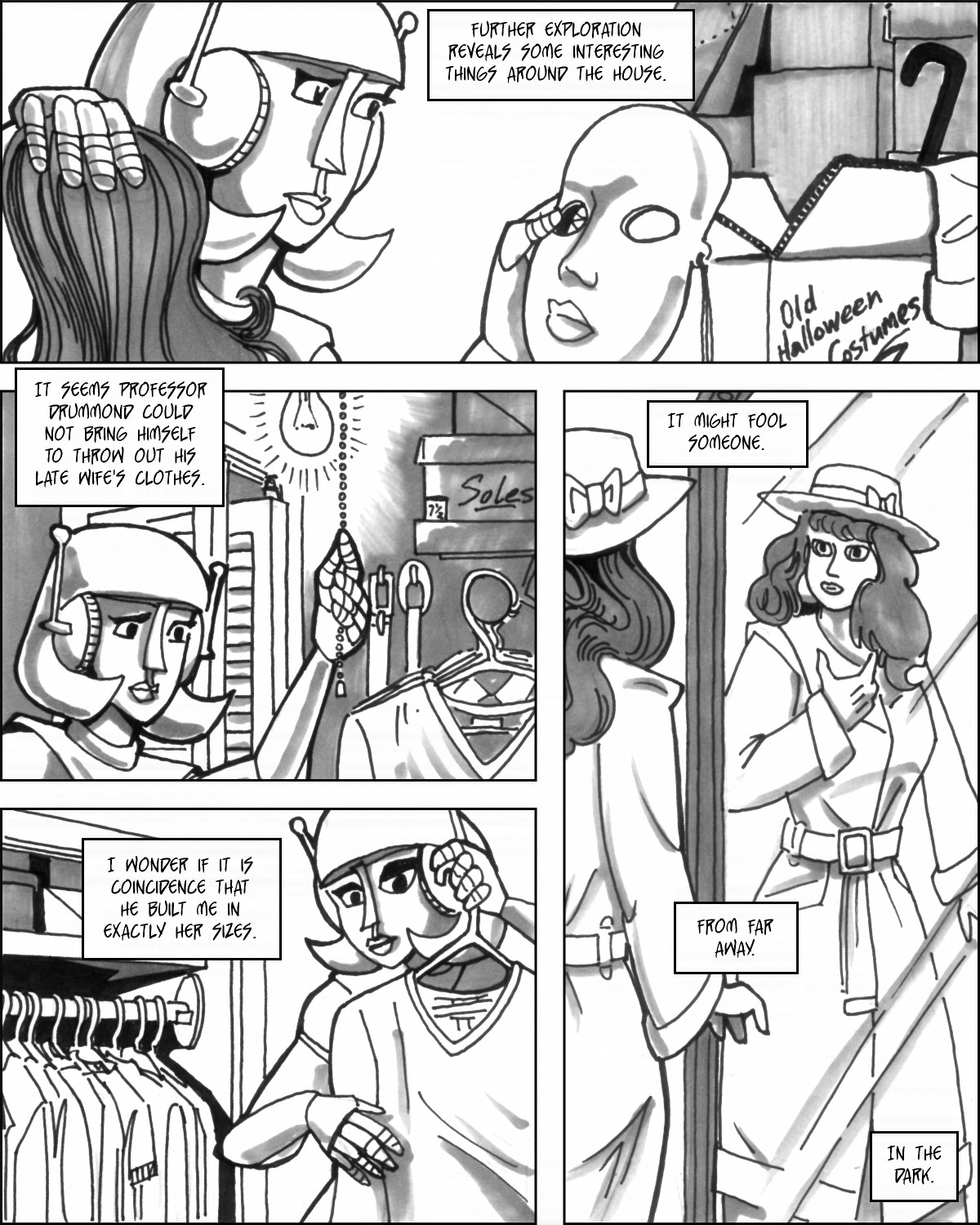 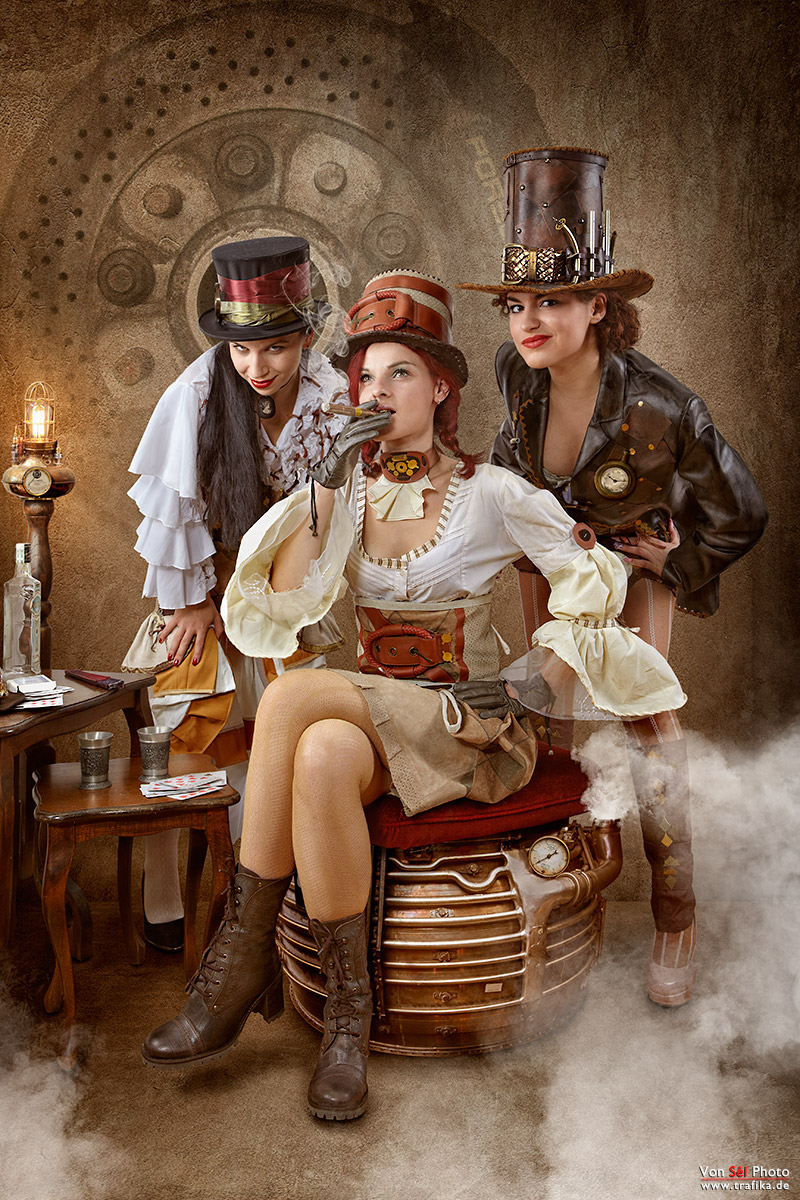 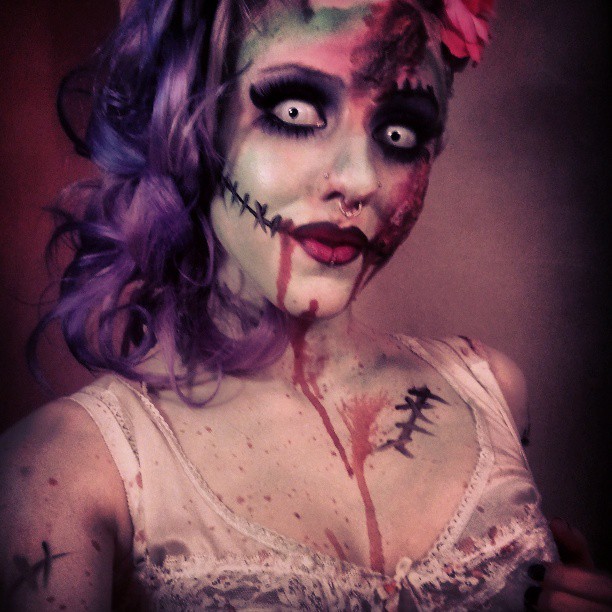