Moira in the library
Ashley's transformation and mine

I’ve blogged before over at ErosBlog about how magnificent I find the figure of Irma Vep from Louis Feuillade‘s 1915 silent serial Les Vampires.  She’s one of the first great cinematic bad girls, a character as daring as they come.

And Ashley Madder, perhaps frustrated with a world that sees her as a kind of  Sarah Palin in training, seems to find her magnificent, too.  The poster of kohl-eyed Irma Vep which The Apsinthion Protocol’s script locates on the wall of her dormitory room is taken right from the silent serial: 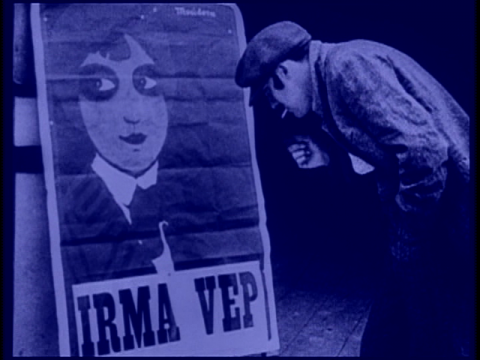 (I have never actually seen an attempt at reproducing this poster in the real world, but would buy one in a minute for the right price if one were available.  Hint, hint.)

In passing, I should note that Les Vampires is not just great for having a great bad girl at its center, but fine source material for thaumatophiles as well, because the Vampires, the criminal gang of which Irma Vep is a part, are among the most dedicated users of science (or pseudoscience) that I can think of in the early cinema.  Poisons, paralytics, trick weapons, hypnotic mind control, and any number of clever technological tricks play key roles in the serial.  We even get a laboratory scene or two, such as this one, in which heavily masked Irma Vep assists Vénénos, a chemist and criminal mastermind, who is then head of the Vampires. 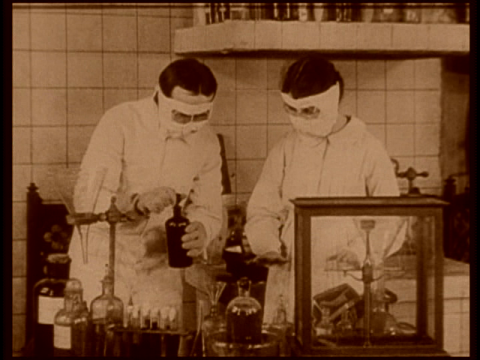 Ashely will emulate her screen idol even to the extent of emulating the slinky maillot de soie in which Irma Vep commits some of her criminal acts.  Also in this case, Ashley might perhaps more be emulating Hong Kong actress Maggie Cheung, playing the part of Irma Vep in a movie about an ill-starred attempt to re-make Les Vampires. 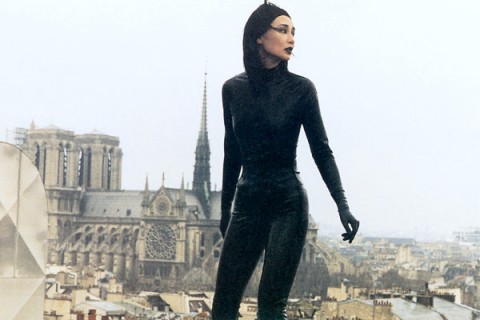 More maillot de cuir than maillot de soie, perhaps, but works for me either way.