PDFs of all scripts available
Paragraphing a little hosed

Yesterday’s post containing an Amazing Stories cover encouraged me to go deeper into the archives for this image to which my attention was directed by Bacchus at ErosBlog. 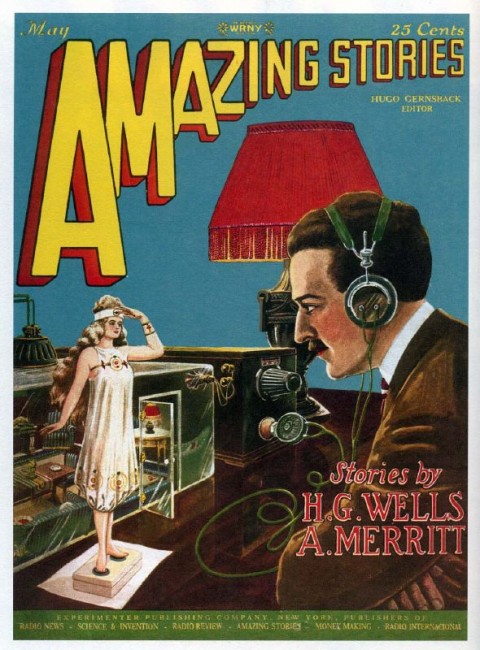 Also Erotic Mad Science, but what kind?  A guy with headphones and various early-era-of-radio apparatus.  And a tiny woman, who I suppose lives in the glass dollhouse behind her and who also appears to be wired up somehow.   Unlike yesterday’s 1952 cover, I’m not even sure what story this is supposed to be illustrating.  Cross referencing clues on the cover with an available on-line index from Science-fiction: the Gernsback Years suggests that this is the May 1927 edition.  (A view confirmed by a check of a more-or-less complete cover archive for Amazing Stories here.) The story by A. Merrit was called “The Moon Pool” and they also printed part of H.G. Wells’s The Time Machine.  But is the story Bent Prout’s “The Singing Weapon”?  Or perhaps more poetically Will H. Gray’s “The Star of Dead Love”?

Perhaps it’s best not to know.  And I don’t say that because I think that any of the stories that were published way back then were bad.  Aside from The Time Machine I haven’t a clue.  Rather, I say so becaue I think that it may just be more fun to look at whatever bizzare scenario is contemplated in this cover art and invent one’s own story around it.  At least that seems to fit into the way I like to write.   The Apsinthion Protocol, for example, started out only as three characters one of whom (who would become Li Anwei) was tunred to liquid and then reconstituted by another (who would become Professor Corwin) watched with at once fascination and horror by a third (Nanetta Rector, in the end).  But it started with no backstory and not even any character names.  The rest of the script was, in a sense, written to have give the scenario something to fit into.

It would be intriguing to give the scenario above something to fit into.   Perhaps someday I shall try.  But I sure don’t want to discourage anyone else from trying in the meantime….