Created women
Embracing what you have become

There’s a visual inspiration for what happens to Colonel Madder in the end, and also for much of what happens to Cleo Mount over her interesting Gnosis days, and that’s a strange little movie often called Horrors of Spider Island, or sometimes by its original German title Ein Toter hing im Netz, or sometimes by Yog-Sothoth-alone-knows what title under its shifty distributors attempted to market it over the years. 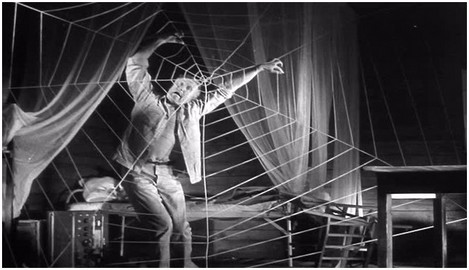 We are talking very simple plot here:  a cast of young women (and one man) are lost on a Pacific island when their plane to Singapore goes down, leaving only them as survivors.  Their situation doesn’t seem so bad, as they have supplies and fresh water, except that there’s some sort of creepy spider-critter who has the ability to turn people into were-spiders (the first example of such a thing I know of).

Not that I can really recommend the experience unless you’re very much into the were-spider thing, but the film is in the public domain, and you can watch it at the Internet Archive.  It probably counts as a good bad movie.  Nothing too explicit that I can remember — there is one unconvincing girl fight and what looks like some skinny-dipping in ill-focused long shot.

The were-spider thing is supposed to be horrible, although as it will turn out, Cleo has something of a different interpretation of her fate.

Bonus Dr. Faustus bleg: Many years ago I came across a volume at (I think) Forbidden Planet NYC which consisted of various adult cartoonists doing work showing how they were inspired by cheesy sci-fi. There was at least one section that I’m sure was inspired by Horrors of Spider Island that contained some illustrations that were rather more explicit on the concept of woman/were-spider interaction than anything that shows up in the actual movie.  But at the time I was living on a very meager graduate-student stipend so I reluctantly put the book back on the shelf.  I didn’t regret it as much as walking away from The Adventures of Phoebe Zeit-Geist, but I still feel sorry not to at least remember the book’s title.  If anyone remembers this volume and can give me some information about it, I’d be grateful if you could let me know, either in correspondence or in comments.