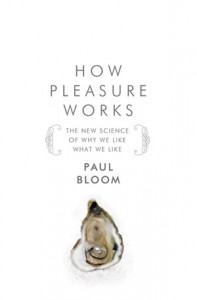 I decided to take a little break from fictional mad scientsts recently and devote some energies to reading something by a real sane scientist, in this case Yale psychologist Paul Bloom, who has a splendid new book out called How Pleasure Works:  The New Science of Why We Like What We Like.

Now How Pleasure Works is a remarkably rich book in spite of its short length and it is difficult to do much justice to it in something like a blog post, but one major take-away therefrom is a lot of evidence for the thesis that the pleasure we take about things depends critically on our beliefs about their natures and histories, and not just their sensory properties.

Let’s bring that down a few levels:  Bloom is defending at least three theses here:

That’s still abstract, so perhaps some illustrative examples will help:

I guess I read Professor Bloom’s book with unusual fascination, because if his understanding of pleasure is correct, it becomes easier for me to make sense of some of the stuff that spills from my fingers onto the page.  Bizarre claim?  Well, consider the notion that something has an essence that remains even if its perceptible qualities change.  It’s a curious piece of common sense, only in light of which can a weird declaration like the following even make narrative sense:

Corwin holds the phial up. Its contents are pale green and appears to glow slightly.

And there we have her.

Corwin tries to press the phial into Nanetta’s hand.

…she is still warm.

The conceit here relies on an essentialist notion. The appearance of what’s in the phial is a warm pale-green liquor, but its essence is that of a pretty young woman. (Hard to read this over without thinking that perhaps it’s a satire of the doctrine of transubstantiation, and perhaps that’s what it really is.)  Without a certain kind of essentialist intuition, you wouldn’t even be able to make sense of the action here, which I am sure you can, even if you think it’s very weird.

Indeed, pretty much any kind of transformation fantasy relies on a certain kind of essentialist notion in order to be readily accessible.  At the moment in Progress in Research when Willie and Professor Waite engage in their Freaky Friday Flip, we can still locate a character who is “really Willie” and another who is “really Waite” and make sense of characters who appear to be other that what they are on that basis.

Professor Bloom also spends rather a lot of time discussing cannibalism, of all things, drawing on the notion that somehow essences might be transmissible across objects (one anthropological explanation of cannibalism is that cannibals are trying to absorb properties of the people they are eating). He even discusses the notorious Armin Meiwes voluntary cannibalism case (don’t read if you squick easily).  Fascinating, because I ran into that before.  There’s an exchange between Jill and Iris in Study Abroad about Iris’s experience of being cannibalized but (maybe) surviving due to being re-created:

Why not just make a backup, and eat it?

I did think to ask. I was told that the clientele thought that experienced meat tastes better.

Apparently the diners in Club Cuisine preferred eating a real American college student with a real life history to merely a simulacrum of one. Like I said, don’t read if you squick easily…

The notion of essences transmitted over history might also be of help in understanding phenomena like agalmatophilia.  When Iris queries Mr. Takayama about why anyone would go the trouble to petrfy another person, he responds in terms that Iris can immediately understand.

Yes. I see. That was certainly the appeal I sensed behind the Club Cuisine.

Indeed, Paul Bloom’s analytical framework might even give a way of explaining what thaumatophilia is.  It’s someone who gets a real kick out of pushing the boundaries on essentialism, either by imagining scenarios where appearance diverges wildly from essence (human subjects become liquid, or statues, or giant spider goddesses), or we push beyond our essentialist intuitions altogether:  people are happy to be replaced with copies of themselves just to prove a philosophical point, or rejoice in being the fusion of two previously existing people.

A reflection that occured to me after reading Bloom’s book is that a thaumatophile is someone not content merely to be a sexual deviant.  Ve wants to be an ontological deviant as well.

While I heartily encourage anyone interested in the subject of this post to buy How Pleasure Works, you can get good stuff for free on the subject by watching Professor Bloom’s recent Bloggingheads diavlog with Robert Wright. And I also heartily recommend this excerpt in the Chronicle of Higher Education on the pleasures of the imagination, something this site itself is all about and which is not merely and instructive discussion of pleasure, but a fine source of it.