With a few exceptions, there aren’t that many live-action as opposed to fantasy-art tube girls, and given how tricky that must be to do as an in-camera effect, I’m not too surprised.  But I have found one that’s a real doozy.

It’s from an astonishing movie called Perfume:  The Story of a Murderer (2006).   Set in mid-eighteenth century Paris and Grasse, it is the story of Jean-Baptiste Grenouille a man with a transcendent sense of smell.  Unfortunately for the maidens of Grasse, the smell that Jean-Baptiste finds most transcendent is that of a young woman, and this, in turn, leads him to become a serial killer who attempts various means of extracting and preserving the scent of women.

What he’s attempting here is an experiment to extract and preserve the scent of a young woman using a technique actually used by real-world perfumers called enfleurage.  Result:  tube-girl.

For such an unpleasant subject director Tom Tykwer sure gives us a lot of angles.

Corwin tries to press the phial into Nanetta’s hand.

…she is still warm. 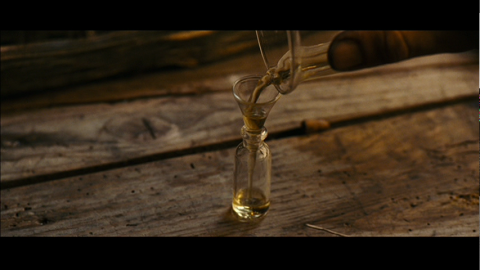 Even the visual image seems right to me. While a lot of critics seemed pretty put out by Perfume, you’d better bet that Dr. Faustus was mesmerized by it.

And when you combine the essences of many girls together, you get perfume just as magical as you do in The Apsinthion Protocol. Though just what the magic is, you’ll have to watch this rather squicky, scary movie to see.

On a sidenote, I have to say that a perfumer’s workshop, at least as created in this movie, is very much in the mad-scientist’s-laboratory, what with all the jar and phials of essential oils and distillation apparatus.

Yes, that is indeed Dustin Hoffman as a perfumer Baldini, giving Jean-Baptiste some of his first lessons.  Look later in the film for Alan Rickman in a tense, understated performance as the father of one of Jean-Baptiste’s would-be victims.

One thought on “Live-action tube girl…Perfume”