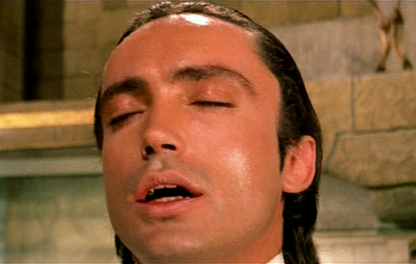 Like master, like student.  Frankenstein’s assistant Otto (played by Arno Juerging) will want in on the act eventually.

Squick inded, although perhaps not without it’s squee element.  Which is an irony.  Morrissey is a self-identified cultural conservative, and the standard critical view is that Flesh for Frankenstein is a critique of hedonism and a technophile approach to life.   As Maurice Yacowar comments in his short essay on the movie for the Criterion Collection:

Paul Morrissey’s Flesh for Frankenstein is one of the goriest film comedies ever made. Yet despite its schlocky sensationalism, it’s still a Paul Morrissey film. That means it has some passionately felt things to say about how we live—and mainly waste—our lives today. Specifically, it blames sexual liberty and individualistic freedom for destroying our personal and social fibre by turning people into commodities.

Yeah, yeah.  As an exposition of auctorial intention that’s probably close to right.  But the funny thing is that for people with the right (or wrong) outlook, movies like this inevitably escape auctorial intention.  I must confess that the harder that Morrissey tried to make Baron Frankenstein a villain — a depraved incestuous homicidal madman — the more I found myself rooting for him.