So how far back does the whole liquid girl/Apsinthion Protocol thing go?  One of the odd but surpassingly charming aspects of being a pervert infovore is that you can keep finding astonishing antecedents for your own thing.  And wouldn’t you know it but one popped up for me just as I was putting together this little post sequence.

Ophelia’s body dissolves into the glittering water that surrounds her.  Woman becomes nature in an epiphanic transformation…With her hands and wrists held above the water in a kind of passive supplication, her parted lips and tilted head show a willingness to be ravished.  Death appears as the ultimate ecstasy, its climax reaching a similar intensity as the sexual orgasm.

You’re not kidding, Professor Lutz — take a look at the painting. 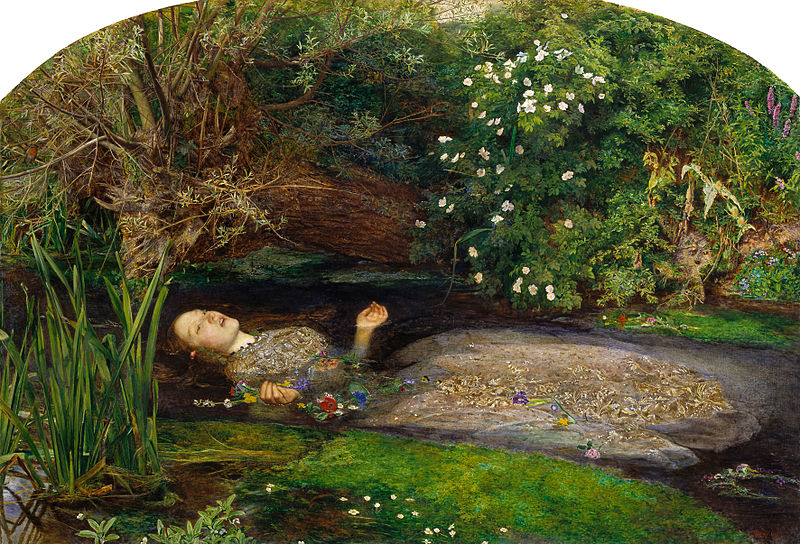 You can click on the image for larger or, if you want lots of detail and have lots of bandwidth, you can find a giant (7087×4280 pixels) version of it here, courtesy of the Google Art Project.

Not only is there dissolution and orgasm going on here, but there’s an awful lot of green…which seems appropriate, somehow.

Something that strikes me as curious, by the by.  The pre-Raphaelites (an artistic brotherhood of whom Millais was one of the founders) would seem to be unlikely candidates for generating mad-science art, given their thematic focus on an imagined pre-industrial (and therefore low-tech) past.  But they seem to show up again and again and again here at EroticMadScience.com.  Must be all that eroticism.  Even before I had the benefit of Professor Lutz’s guidance, I already knew those Victorians were all pervy.

The model in the painting, by the way, was Elizabeth Siddal, who would eventually meet a fate worthy of a second-tier character in Buffy the Vampire Slayer.  But I’ll just suggest you get a copy of Pleasure Bound to find that one out…