My original tumblr post was here. This image was researched by Bacchus at ErosBlog as part of the “Δ commission.” The research was originally published at Hedonix as “Δ 073 – Brainwashing In Progress.” Here is what Bacchus found.

This animation consists of frames from the 1977 sexploitation movie Ilsa, The Tigress of Siberia. The scene is included in sets of stills at three different websites, although neither of two detailed summaries of the movie’s plot explains what specifically is happening (or to whom) in the scene with the wired-up girl (not Ilsa). Here is a larger still image of the scene: 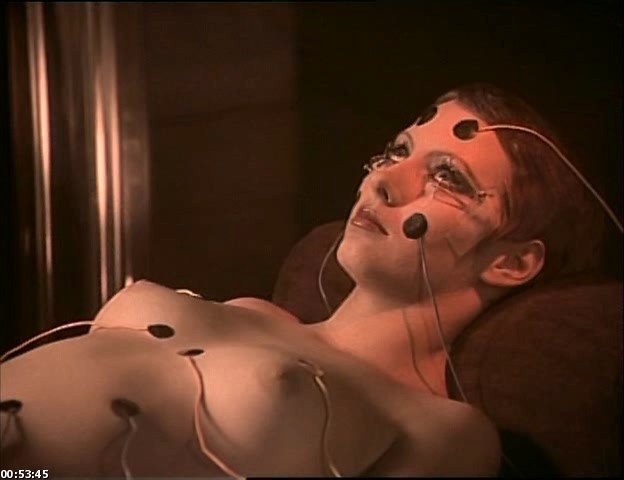 A probably-temporary copy of the movie dubbed in Spanish exists on YouTube, where the scene in question starts at about 52:15. Although it’s not entirely clear what’s going on, the scene appears to depict a sort of electronic brainwashing or mind-control project, that leaves its victim huddled in a barren cell while imagining that she is trapped in a tropical bog being bitten by snakes. Here’s another captured still of the brainwashing equipment in use: 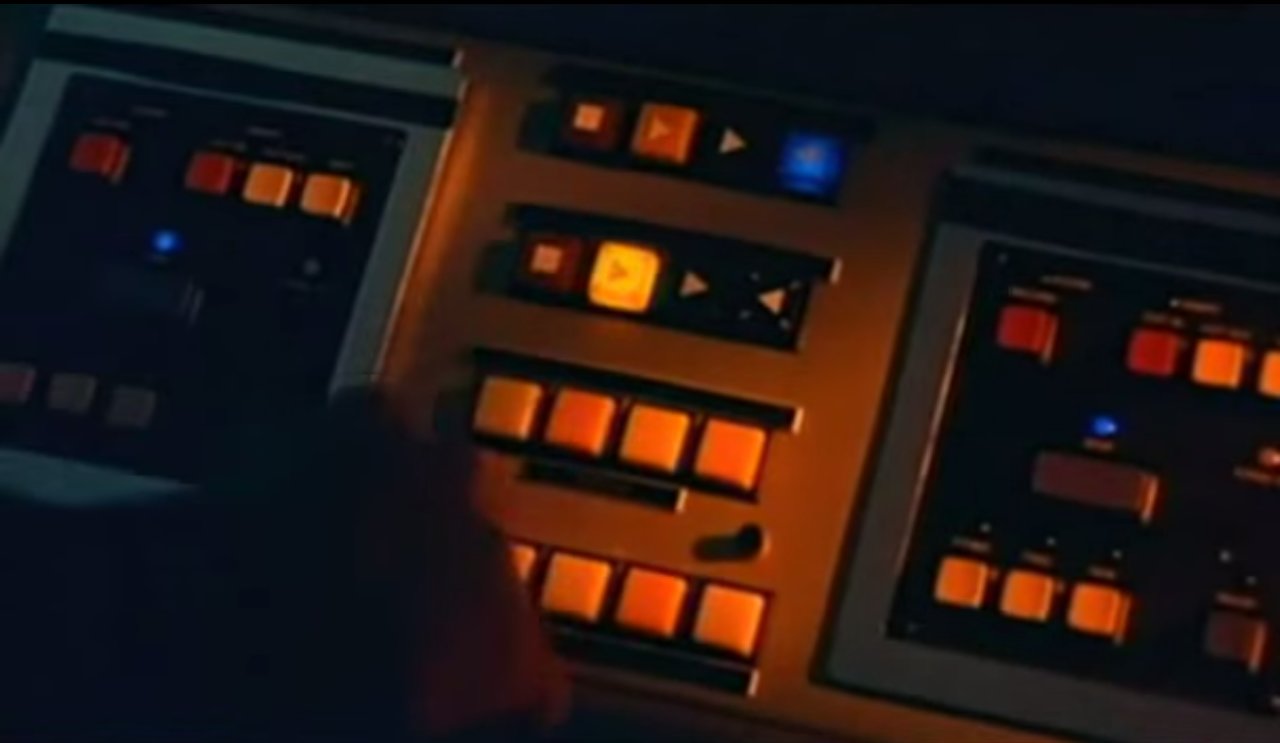 My original tumblr post was here. This image was researched by Bacchus at ErosBlog as part of the “Δ commission.” The research was originally published at Hedonix as “Δ 072 – The Christmas Bride.” Here is what Bacchus found.

This striking image of the Bride of Frankenstein with her hair decorated with poinsettias and pine cones is called The Christmas Bride where it appears on artist Patrick Awa’s website. The artist writes:

It took me forever(I also upgraded my tablet from old Intuos 3 to Intuos 5 touch during this production which also caused a bit of struggle to figure out the proper settings), but it is finally done. This will be printed in Giclee and framed for upcoming Q Pop’s “Black Christmas” show. 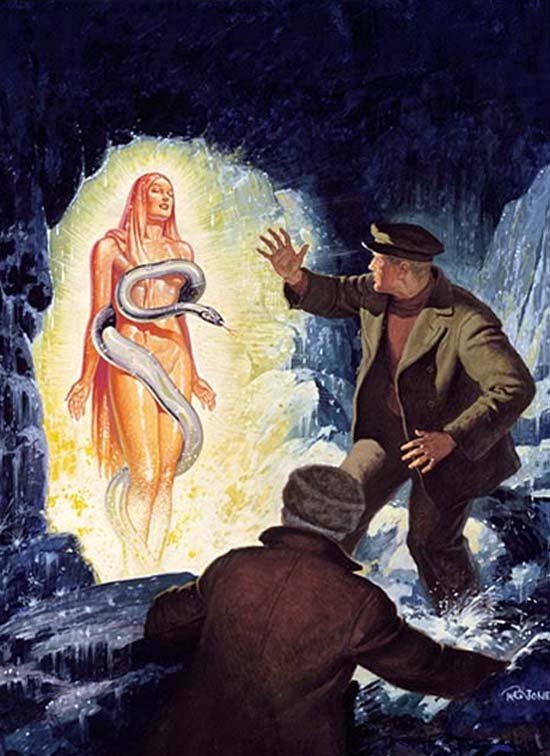 My original tumblr post was here. This image was researched by Bacchus at ErosBlog as part of the “Δ commission.” The research was originally published at Hedonix as “Δ 071 – Cave Girl, Serpent Undies.” Here is what Bacchus found.

According to this web page, the artwork above is by Robert Gibson Jones and it appeared on the cover of the September 1945 issue of Amazing Stories: 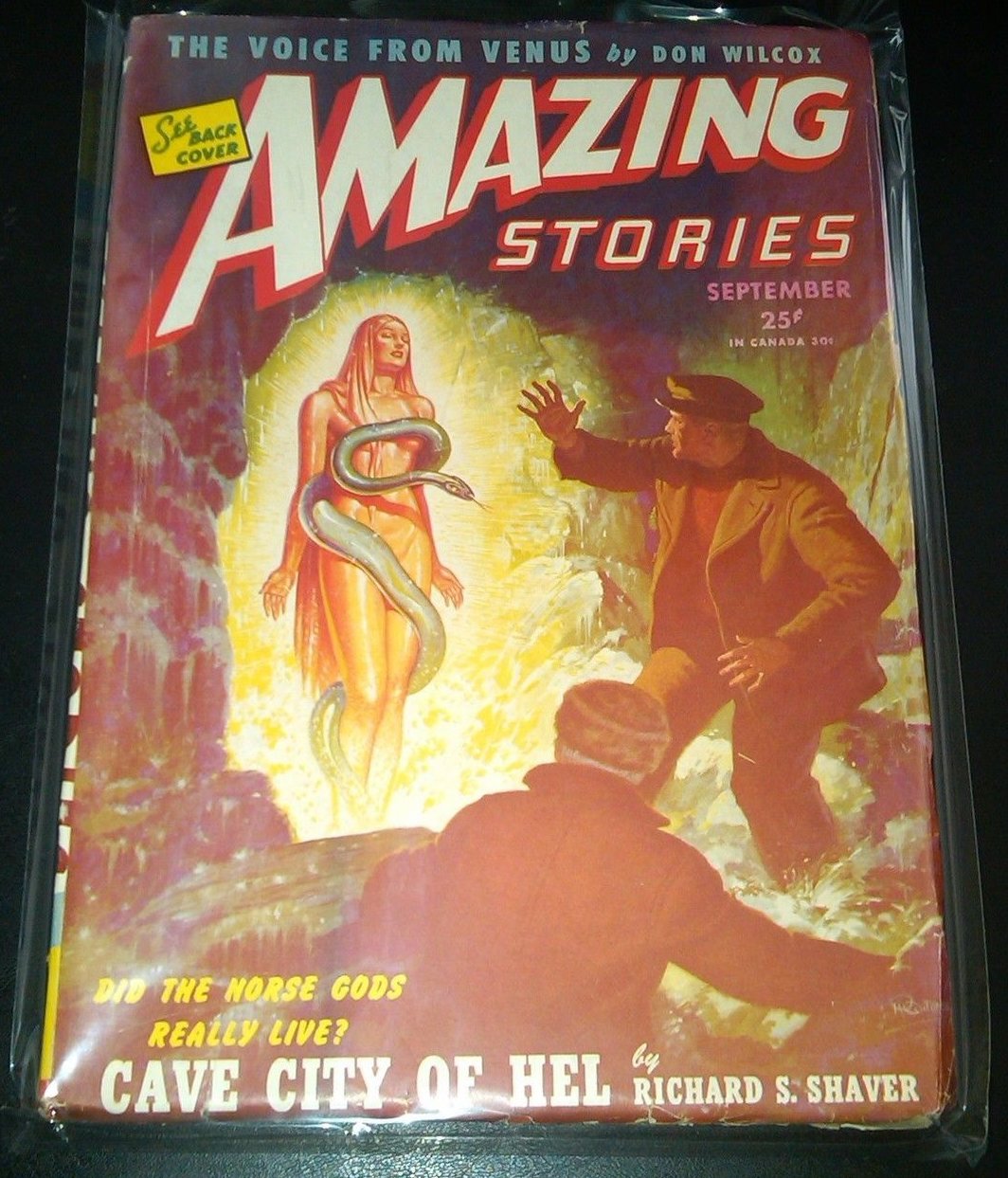 The artist’s signature is partly visible lower right in the image. Robert Gibson Jones was a prolific pulp artist of the 1940s and 1950s. A bibliography of his many science fiction magazine covers and interior illustrations is here. 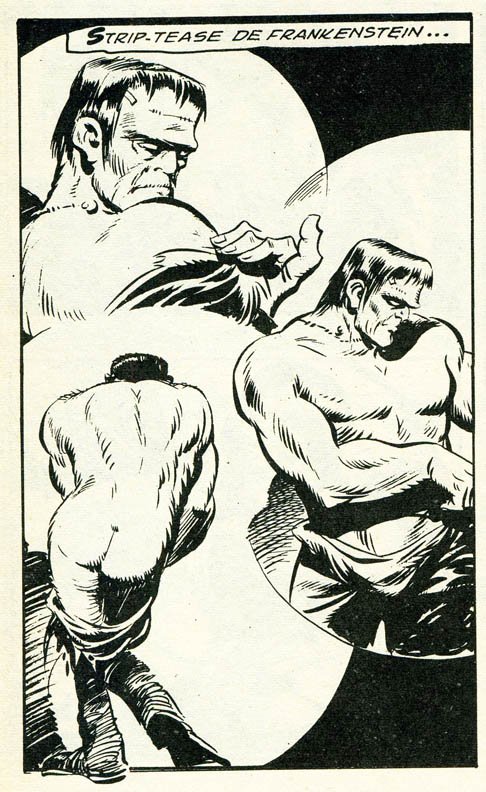 My orignal tumblr post was here. This image was researched by Bacchus at ErosBlog as part of the “Δ commission.” The research was originally published at Hedonix as “Δ 069 Monsters Have Secrets.” Here is what Bacchus found.

This artwork in the style of European fumetti comics is a detail from one page of such a comic: 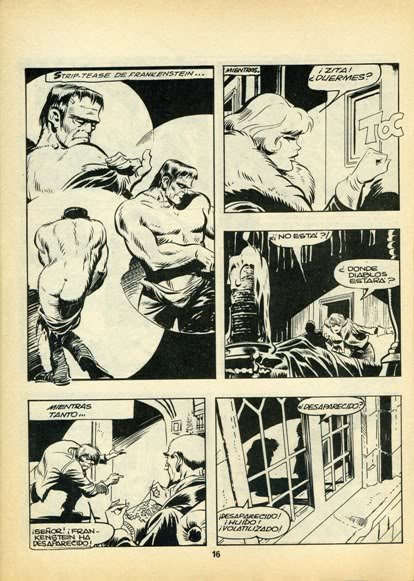 This comics page appears in a 2008 LiveJournal entry as one page of a seven-page strip, which sadly is not identified by name, publication, or artist. However, image filenames containing the string “HEMBRASPELIGROSAS05” suggest that the strip may have appeared in Issue #5 of Hembras Peligrosas, the cover of which advertises a story called El Secreto De Frankenstein. What that “secreto” might be is perhaps indicated by a panel from a different page of the strip:

The subject artwork appears to have also appeared in an unidentified publication with different lettering in French: 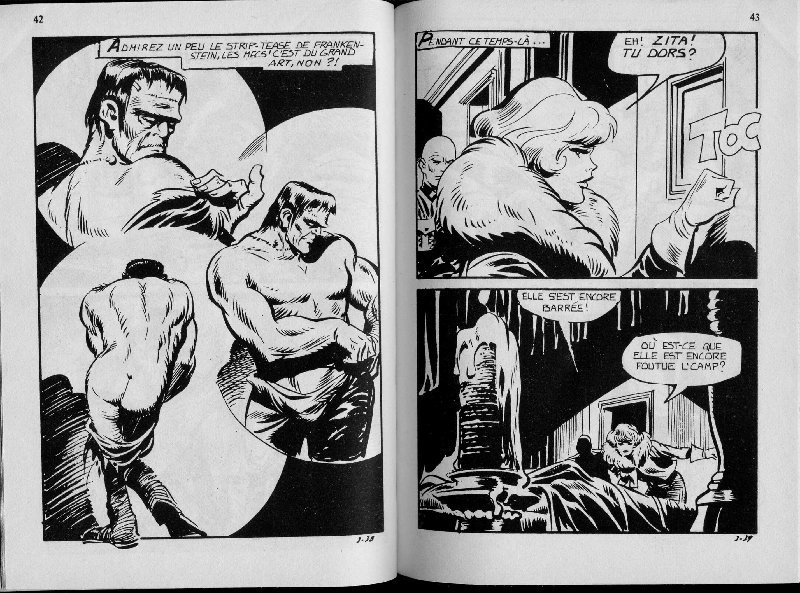 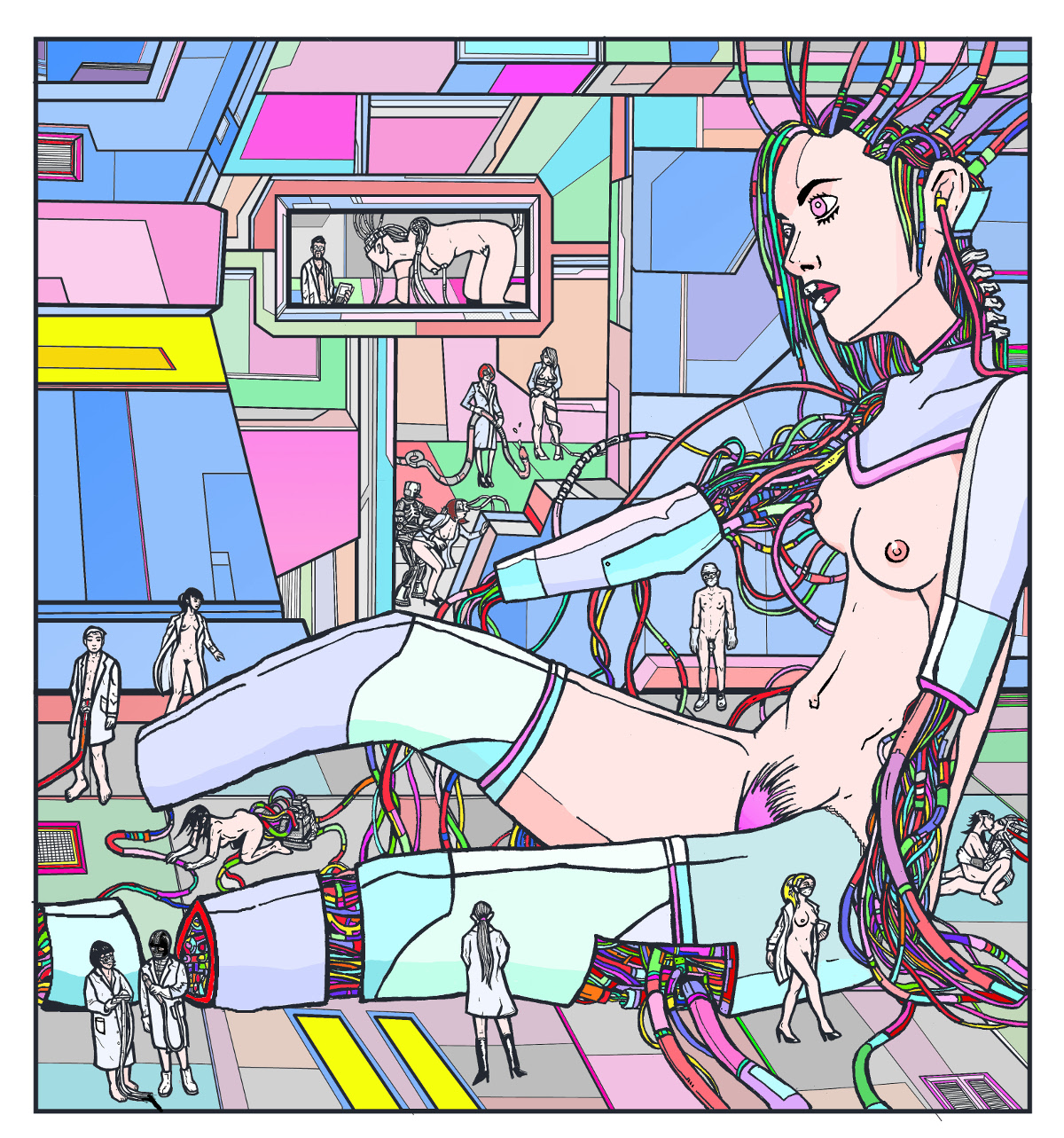 My original tumblr post as here. This image was researched by Bacchus at ErosBlog as part of the “Δ commission.” The research was originally published at Hedonix as “Δ 067 100-Foot Cyberpunk Woman.” Here is what Bacchus found.

The source post in this image’s Tumblr chain of attribution is from a blog consisting of many artworks evidently by the same artist. The blog is called “AT THE END OF EVERYTHING: drawings for the end of everything”. An earlier version of the same artwork without coloring also appears on the same blog. 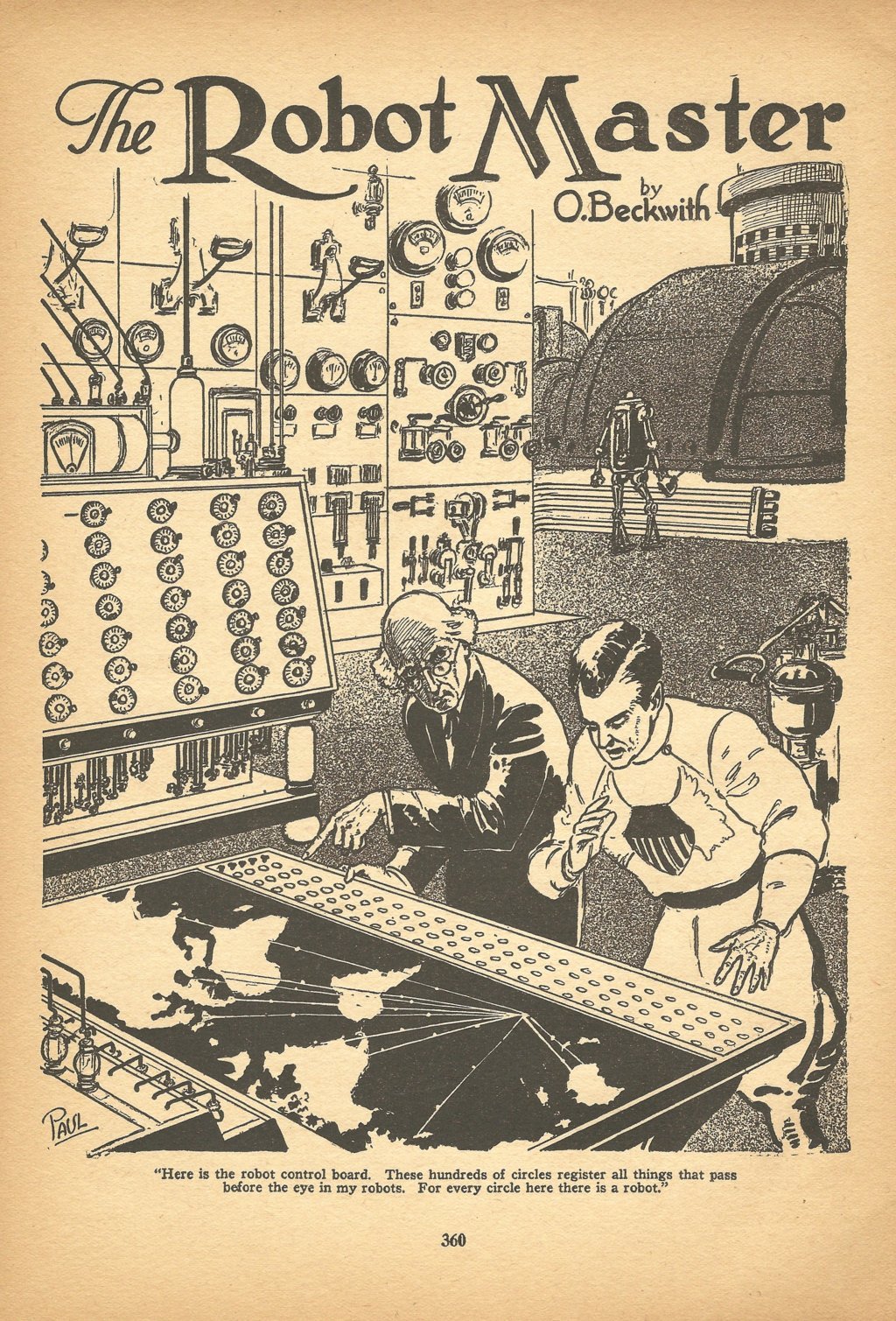 My original tumblr post was here. This image was researched by Bacchus at ErosBlog as part of the “Δ commission.” The research was originally published at Hedonix as “Δ 068 – Robot Control Panel.” Here is what Bacchus found.

This image is a page from the October 1929 issue of Hugo Gernsback’s Air Wonder Stories (available in its entirety here). The artwork is signed “Paul”, which corresponds to the magazine’s art director Frank R. Paul, as seen on the masthead: 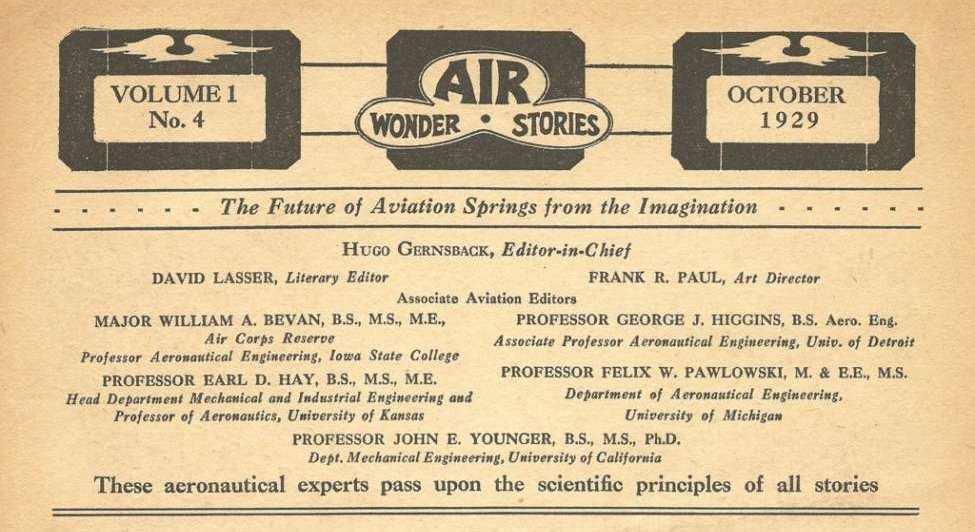 The artist Frank R. Paul is one of the most influential illustrators in the history of American pulp magazines. He is perhaps most famous for his illustration of Martian robots on the cover of the 1927 Amazing Stories magazine where H.G. Wells’s War Of The Worlds was first serialized. 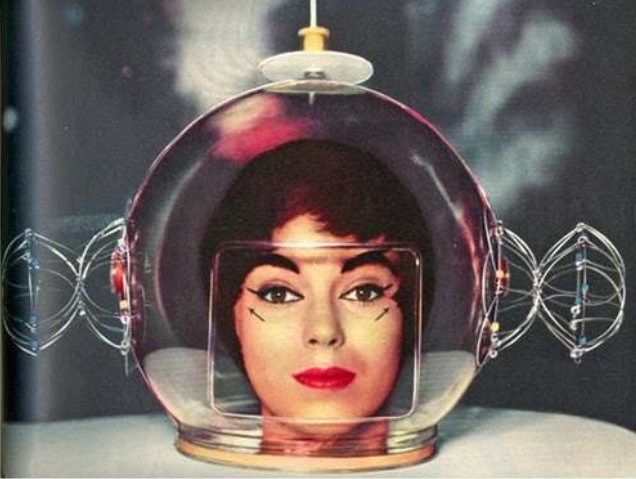 My original tumblr post was here. This image was researched by Bacchus at ErosBlog as part of the “Δ commission.” The research was originally published at Hedonix as “Δ 066 The “Lunar Look” For 1973.” Here is what Bacchus found.

All appearances of this image on the web appear to source back to an article in IO9.com quoting from the outer-space-themed November 1953 issue of Seventeen magazine. Although IO9 does not expressly credit this image to Seventeen, one may observe curvature at the left indicating that the image is indeed a photograph of a page from a magazine. The issue reportedly included a light-hearted look forward to an imagined 1973 “Lunar Look” issue of the magazine that would include this description — matching the photograph — of spacewoman fashions:

WILL THIS BE FOR 1973? As an interplanetary tourist, you may use such cosmic cosmetics as Trans-Pact pressed powder, Semi-Stain lip and cheek color to overcome interplanetary pallor, Anti-Gravity hair control, Eye Fringe mascara, impervious to upper stratosphere moisture, Milky Way cleanser. All in plastic, in a kit touched with neon for making-up during dark spaces on the trip. . . . Headgear, a space helmet with painted eyebrows. Travel guide . . . SEVENTEEN’s Lunar Look issue, November 1973. 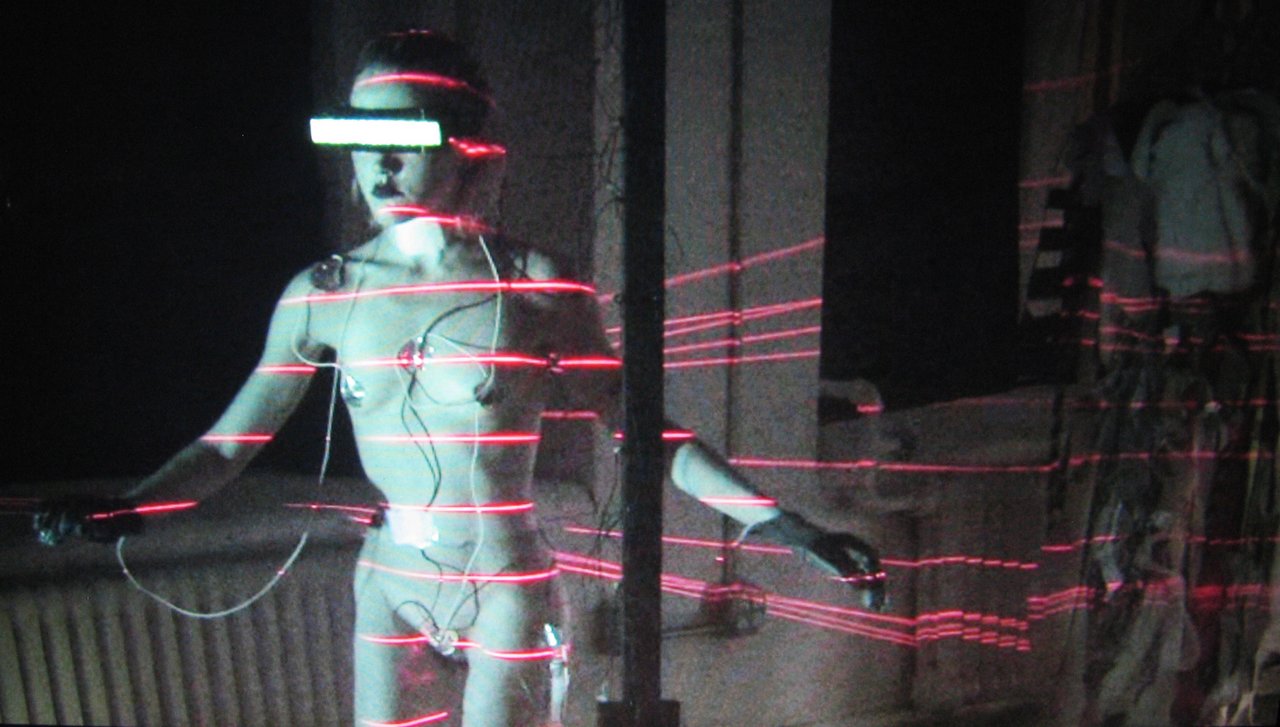 My original tumblr post was here. This image was researched by Bacchus at ErosBlog as part of the “Δ commission.” The research was originally published at Hedonix as “Δ 065 Illuminated Love Network.” Here is what Bacchus found.

The source Tumblr post in this image’s current chain of Tumblr attributions offers a surprisingly good provenance for this image:

A NETWORK OF LOVE (2008): a network of love depicts a highly sexualized slice-of-life of the average girl, OIIOOOFF2013, in a post-apocalyptic future:

“sun rises on a devastated earth. the last children of eve struggle to maintain their digital lifestyles. global trade has long since ground to a halt, and our infrastructure lays in ruins. the old systems of power have collapsed and from these ashes, a new society rises, a networkoflove.”

The references are to a performance by Berlin-based performance artist Helga Wretman. The block-quoted information above comes from the photo’s source location on Flickr, where the the further caption also appears: “Starring Helga Wretman as OIIOOOFF2013. An Average girl of the not-so-distance future. ALL WE HAVE LEFT IS EACH OTHER.”

The entire performance — and the stand-alone art installation which was repurposed into the setting for it — is documented in this Flickr photograph series by photographer Ruaminx. The series of photos is captioned: “Etapa Del Funcionamiento (Segundo), 2008. Installation at Exit Art, NYC July 24th-August 31st, 2008. This piece evolved into a Stage for “Network of Love”, A collaborative effort with Helga Wertman and Aids-3d.com for a one night performance on August 1st, 2008.”

Here is an additional photograph from the Flickr photo series of the performance: 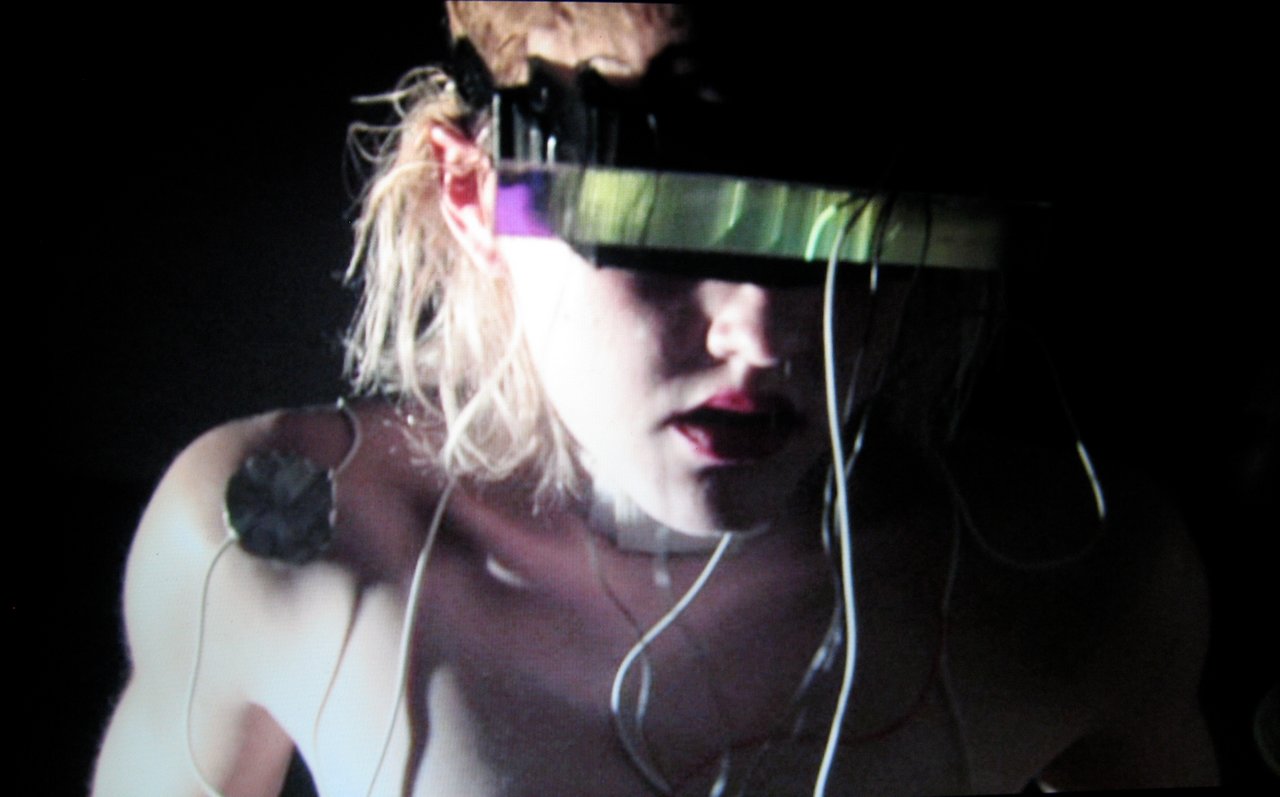 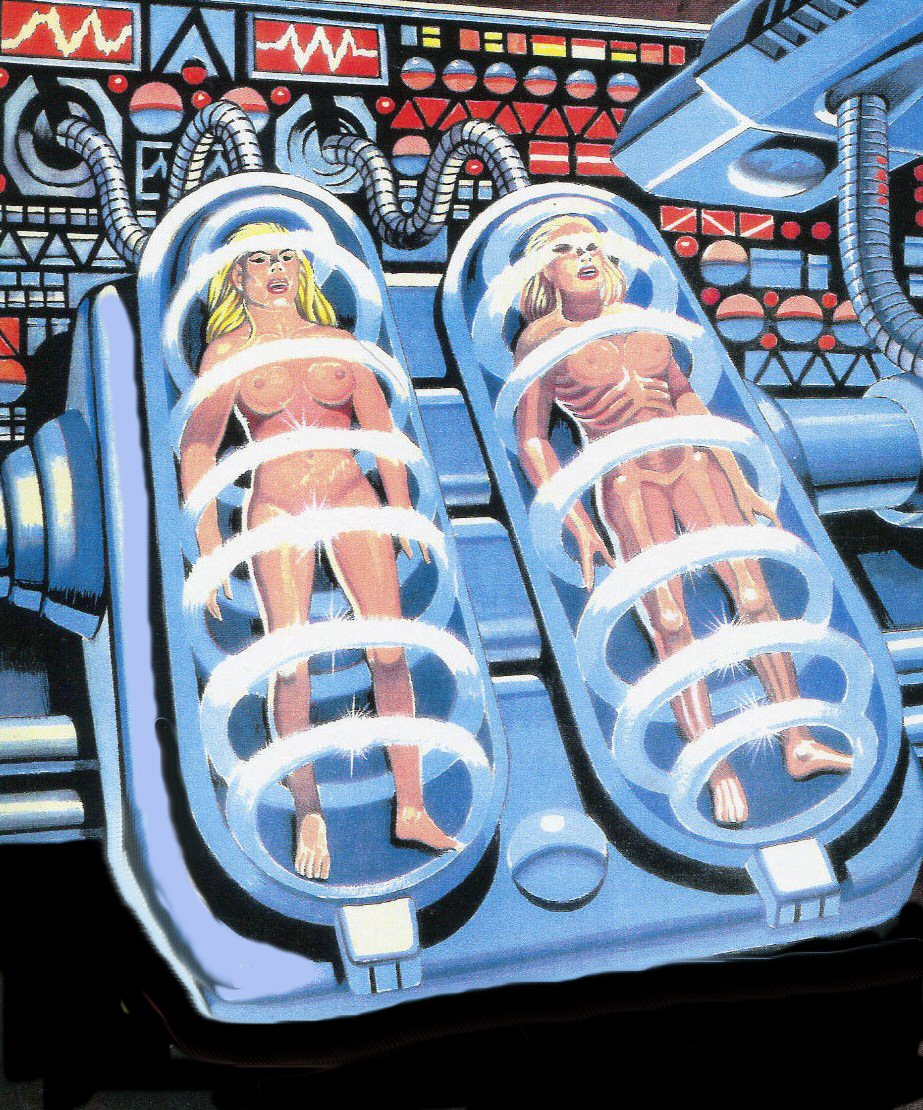 My original tumblr post was here. This image was researched by Bacchus at ErosBlog as part of the “Δ commission.” The research was originally published at Hedonix as “Δ 057 – Tube Twins.” Here is what Bacchus found.

This image is a cutout detail (heavily blown up) from the cover of a modern edition of Twin Of The Amazon, a 1948 pulp novel from the 27-volume Golden Amazon series, by author John Russell Fearn: 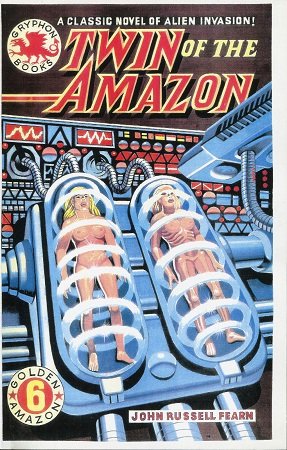 According to the International Science Fiction Database, the full cover art shown directly above is by artist Ron Turner and was scanned from a 1998 re-release edition of the book. Turner’s career credits begin in 1950 and continued through his death in 1998, so it is clear that this cover could not have appeared on the original 1948 edition of the book. However, both Wikipedia and the ISFDB indicate there was also a 1954 edition. The Wikipedia entry for Ron Turner, though, suggests he did not begin drawing cover art for Gryphon Books until the 1990s, leading to the conclusion that this artwork is quite modern. Indeed, the cover of one 1954 edition seen here is far less lurid: 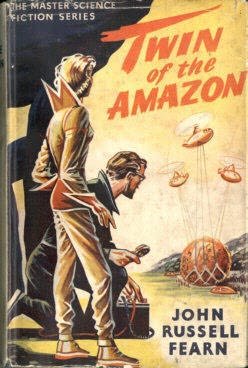 My original tumblr post was here. This animation was researched by Bacchus at ErosBlog as part of the “Δ commission.” The research was originally published at Hedonix as “Δ 055 – Brain-In-A-Jar Villain.” Here is what Bacchus found.

The source Tumblr post in this animation’s current Tumblr chain of provenance includes the tags “#bare knuckle 3 #sega #mega drive”, suggesting that the animation is from scenes included in the 1994 Sega console game Streets of Rage 3 (titled Bare Knuckle III in Japan) for the Sega Genesis (released in Japan in 1988 as the Mega Drive).

A video of the final scenes of the game (in which a player first defeats the final sub-boss before entering the room shown in this animation) may be viewed on Youtube. Before confronting the ultimate boss monster, the player has a short text conversation with the brain in the jar, who is called “Mr. X.” The player asks Mr. X “Do you expect to run the city from a glass phial?” Mr. X says “Yes, traitor, let me show you how!” and then the final toughest robot combat minion appears. In the fight the brain’s jar is broken and Dr. X then says “I’m dying. Please help me.” 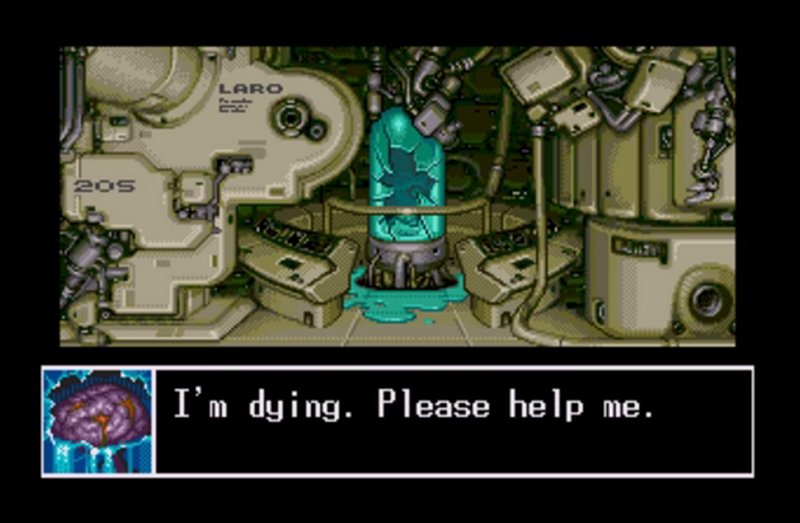