Background: way back in my early graduate student days I read a comic drawn by Phil Foglio called XXXenophile that made me very happy. 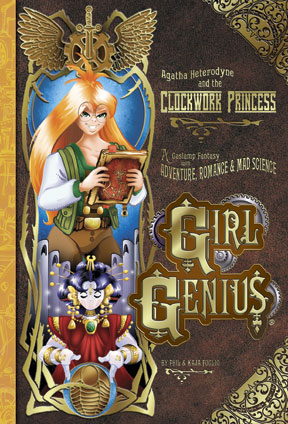 So as I was writing the Gnosis College scripts, perhaps just after finishing the first draft of Study Abroad, it occurred to me to wonder what good ol’ Phil Foglio had been creating as of late, seeing as he had been such a good influence on me in my impressionable youth.  So I googled around and found out:  a web comic called Girl Genius, which are the adventures of one Agatha Heterodyne in a mad-science, steampunk world.

It was with a peculiar mix of delight and dismay that I discovered that Agatha is a student at an institution of higher learning called Transylvania Polygnostic University.

I didn’t steal the idea, Phil!  Honest!  It’s just that γνῶσις, a Greek noun meaning knowledge, especially knowledge in a higher or esoteric sense, is one of those things in memetic space that many people are just bound to stumble across.

It’s probably a little late for me to make the change now, and I do like the word Gnosis for any number of private reasons.  But I can at least offer the shout out to Phil Foglio.  So here it is.  You can subscribe to XXXenophile online now at Slipshine, and keep up with the adventures of Agatha Heterodyne’s adventures at the Girl Genius site.

Dr. Faustus sez, check it out.