For the longest damn time I had a visual image of the sort of thing that poor Marie gets bound into and rolled away in, but had no damn idea what it was called.  I had vague memories of seeing them in at least one Janet Jackson video and perhaps a martial arts movie or two, but was still clueless.  But thanks to a searchable Internet, I know now.  It’s called a rhönrad, and it’s a gymnastic device invented in Germany in the 1920s.  It looks like a remarkably tricky gymnastic discipline. 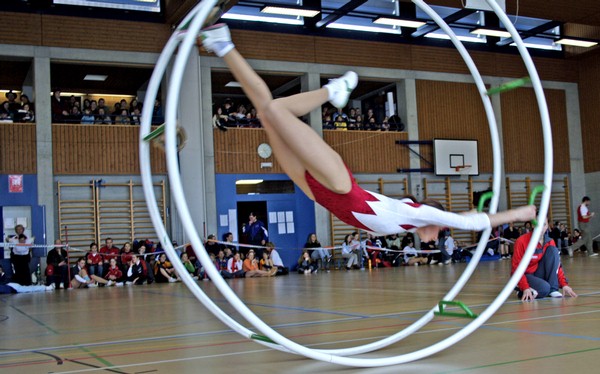 (Image source this Dutch-language page.)  Using these things is a real sport with a real international organization devoted to them.

Which is not to say that they aren’t sometimes used for cheesecake appeal.  Note this vintage image. 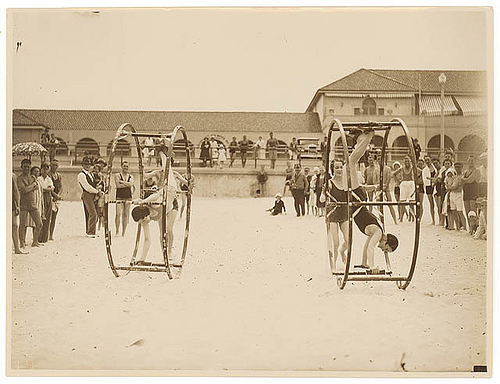 Now Marie’s wheel isn’t for cheesecake or for gymnastics.  She’s bound in it to be humiliated and disoriented (more than she already is), and for this I must admit a rather different, but still real-world inspiration, which is this: 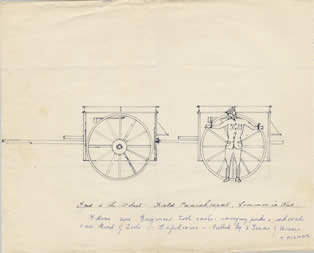 This is an illustration of something called “Field Punishment No. 1,” and it really was used as a form of military discipline on British soldiers in the First World War.  (The illustration above is from the website of the Canadian War Museum.)  It involved strapping a soldier motionless to something like a wheel or a fence for two hours.  Very unpleasant if you have to itch, which given the ubiquity of things like lice in a trench environment meant often.  The punishment was common enough for Paul Fussell to conjecture in The Great War and Modern Memory that it might have been a source for common Great War urban legend:  “the myth of the Crucified Canadian.”

Funny given all that that an attempt to find something that answered to the description of “rhönrad bondage” came up empty.  (Might just be too damn impractical, even for a rhönrad on flanged wheels to prevent tipping or escape like Marie’s.) But I did encounter this curious image at what appears to be a German-language bellydance site, which does seem to fit the overall theme. 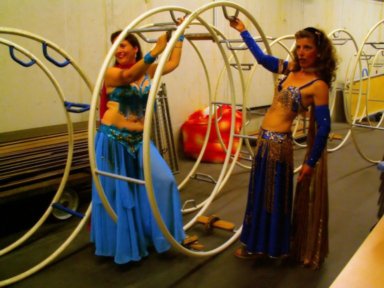 Bet you wish you could have seen how all that was put together!