If there are any among you who don’t know the core plot behind Roald Dahl‘s Charlie and the Chocolate Factory or its various film adaptations, it is this.  Eccentric industrial chocolatier (and, as I would argue, first rate mad scientist) Willy Wonka sets up a world-wide lottery that picks five children (with one guardian each) to go on an exclusive tour of his rather strange and dangerous factory.  Four of the lucky winners are beastly children whose misbehavior leads them to get into near-fatal trouble.  The fifth is the penurious but angelic Charlie Bucket, whom Willy Wonka adopts as his heir at the end.

The first beastly child to get in trouble is Augustus Gloop, a gluttonous boy unable to resist the temptations of Willy Wonka’s chocolate river.  Unsurprisingly he falls in and is promptly sucked up into one of the river’s effluent pipes wherein, due to excessive girth, he gets stuck for a while.  In the 1971 film version, he looks like this: 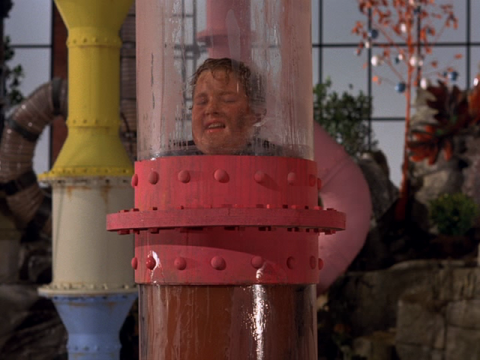 What’s beneath him is high-pressure liquid chocolate (he’s lucky to have been sucked up head-first!) which will eventually push him up through the tube to a destination elsewhere in Wonka’s factory.

One obvious fetish that will be fueled by this scene is something called wet and messy fetishism, arousal brought about by being coated in messy fluids or semi-fluids, chocolate being a popular choice.  It’s not something I know much about, but if you wish to suggest interesting resources in the comments, then by all means dive right in.

Fetish fuel for a new generation came in the 2005 version: 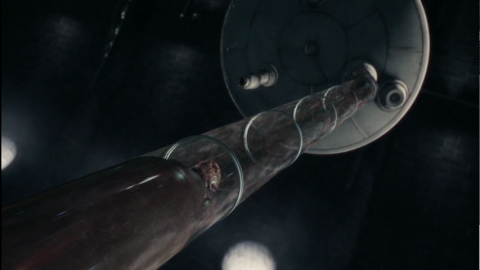 The prop designers deserve extra credit on this one, because the tube empties into a transport vessel that looks a lot like a flying saucer, thus giving the scene an additional alien abduction overtone.  Some people are into that.

Oh, please, just one more image?  This one has robots in it as a bonus. 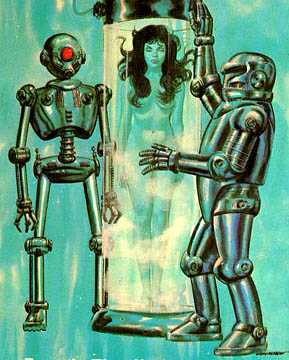 Found at Janitor of Lunacy, where else.