One last post on Willy Wonka before moving on to other topics.

In the 2005 adaptation, Mike Teavee presents an interesting sort of character in that it is suggested that even if a horrid child, he is something of a mad genius.  He finds the golden ticket that gets him into Wonka’s factory not through dumb luck (like Augustus Gloop and Violet Beauregard) or a brute force approach (like Veruca Salt) or the operations of karma (Charlie Bucket, of course) but through a calculation — something involving shipping dates, controlling for the weather, and “the derivative of the Nikkei.”

Don’t you realize what you’ve invented? It’s a teleporter! It’s the most important invention in the history of the world. And all you think about is chocolate.

Calm down, Mike. I think Mr. Wonka knows what he’s talking about.

Mike makes a dash across the room toward the teleporter device, knocking down two Oompa-Loompas as he does so.

But push the button Mike does, with himself as experimental guinea pig.  An ideal “I’ll show them” attitude that wouldn’t be out of place in more movies than I could probably name.

Now Mike does sort of get out of his predicament, albeit rather changed.  Wonka’s remedy for Mike shinkage is to stretch him out like taffy.  This leaves Mike rather tall and thin, as the shot of the departing horrid children clearly shows. 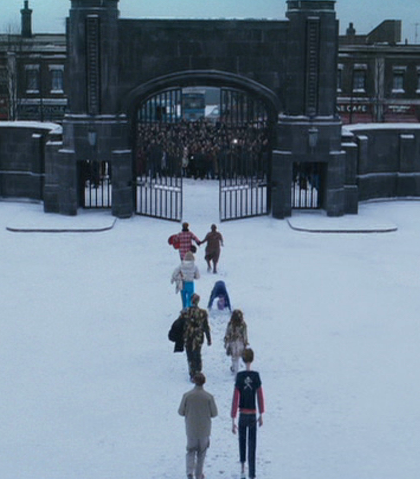 Mike, unlike Violet, gives no indication of being at all pleased by his transformation.

I don’t think I’m giving away a spoiler in indicating that in the end Charlie ends up as Wonka’s heir as a mad science confectioner.  But what of Mike?  Might he not be vowing revenge?

I think that there could be a great sequel here, where a grown-up (but still physically warped) Mike Teavee becomes a supervillain mad scientist, seeking to wreck revenge on the grown-up Charlie Bucket.