Seth Brundle might not start out mad.  As a scientist he doesn’t want to create new life out of dead tissue or take over the world or shake his fist angrily at God.  He just wants to create a technology that I’m quite certain would benefit humankind if it could be made to work:  a matter transporter.  (And if you don’t think it would benefit humankind, there’s a twenty-hour nonstop flight from Newark to Singapore that I invite you to take sometime.)

Now as we all know, matter transporters have a way of not working quite right when people go through them.   In poor Seth Brundle’s case, a fly gets into the tranporter pod with him and…well, a certain fusion takes place.  Brundle wasn’t careful enough.  But even his recklessness isn’t really mad scientist hubris.  It’s very human scale:  he gets drunk because he (wrongly) suspects that his marvellous new girlfriend Veronica Quaife (played by Geena Davis) is being unfaithful to him.  One thing leads to another, he hops in the pod and that sets in motion some bad things.  Like his slow transformation into…Brundlefly. 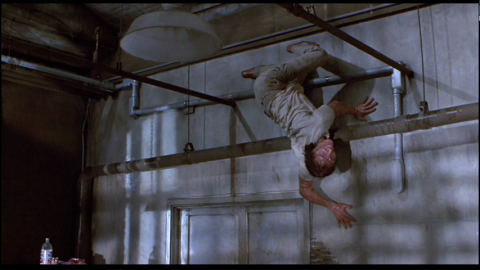 Dear reader, judge Brundle not harshly.  How well would you behave if your marvellous new girlfriend played by Geena Davis appeared to be mistreating you?

The impressive thing here is that after he begins transforming (manifested, among other things, by his ability illustrated above to climb walls) is that Brundle does become a good deal more mad-science.  Consider this soliloquy to Veronica:

I seem to be sticken by a disease with a purpose wouldn’t you say?…Maybe not such a bad disease after all…I know what the disease wants.  It wants to turn me into something else.  That’s not too terrible is it?  Most people would give anything to be turned into something else.

I rather like that — perhaps it influenced the sort of speech that Cleo Mount gives on the day of her final transformation on the merits of embracing what you have become, even if it seems monstrous to others.

Alas, since this is a David Cronenberg movie, this is not a cheerful attitude that Brundle will be able to sustain, as I shall discuss in an upcoming post.