Aesthetics of the Fly III
Mad Science non-essential: Mesa of the Lost Women

The thought of people turning into flies means that now I just have to post this disturbing comix advertisement, to which my attention was directed by Bacchus and which appears on the tumblr blog Comically Vintage. 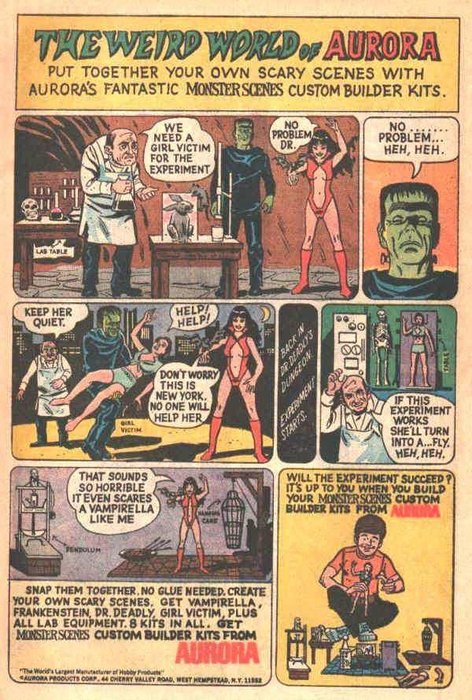 “She’ll turn into a fly, heh heh.”  Well, that’s at least thematically apropos this week.  My initial reaction to the ad was a lighthearted “it’s Poser for the pre-computer era!”  But there are naturally some darker strains here.

There’s a wealth of weird in this ad, beginning with the strange cast of characters:  Vampirella, Frankenstein’s Monster (misidentified as “Frankenstein” in the ad) and an obscure mad scientist called “Dr. Deadly.”  (Guess his experiments don’t work so well.) I wonder how disturbed we should be that there’s a specific action figure designated as “Girl Victim,” or that these are apparently action figures meant as children’s toys.

The line “Don’t Worry, this is New York, no one will help her” marks a special (and, to my mind, ugly) cultural moment, perhaps an indication of the long shadow cast by the 1964 Kitty Genovese incident, which of course has its own deep comics resonance — awful real life intersecting with popular culture. 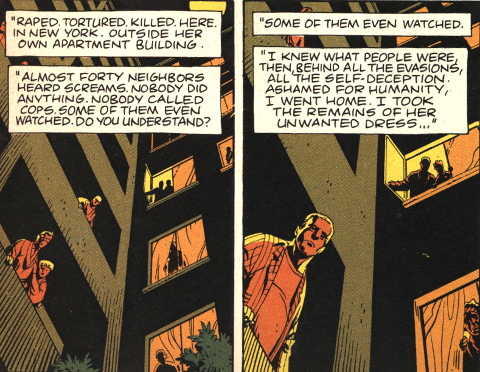 In a children’s toy, a reflection of the “New York = hell” meme that would be so common in the popular culture of the 1970s. (One manifestation of which would be the 1974 movie Death Wish, which would mark — you guessed it — the first screen appearance of Jeff Goldblum, so it all comes full circle, yes?)

On a side note:  isn’t Vampirella supposed to be a heroine?  If not entirely benign, then at least certainly not the sort who would help kidnap innocent young women into horrible mad-science experiments.  Am I misssing something here?  Perhaps someone more familiar with the history of the character can set me straight in the comments.

One thought on “Aesthetics of not-the-Fly”