Jekyll and Hyde a bit better (...or Misty Mundae on Monday)
Origins of tube girl meme?

Al Feldstein and Jack Kamen back at Weird Science sure seemed to like the liquid girl trope.  I’ve found another example, this one from Weird Science #15 (September/October 1952). 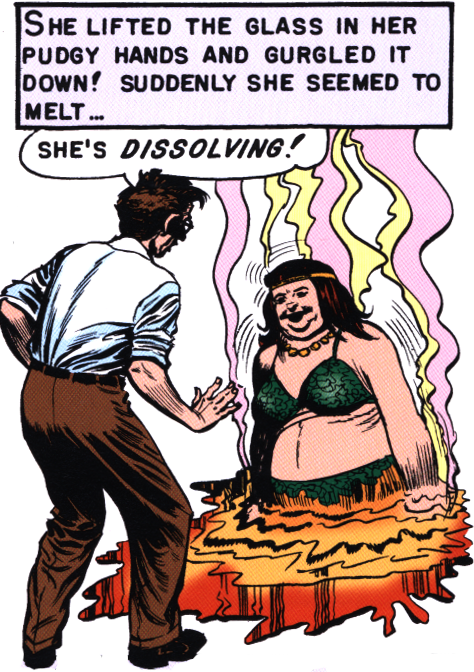 What on earth is going on here?  Well, it’s yet another story of loneliness and sexual failure.  Melvin Sputterly is a bachelor who lives alone in rented rooms.   One day he receives a mysterious package bearing  a postmark from the year 2952 and, internally, a label reading “De Luxe Personal Harem Kit:  Not for sale to minors or married men!”  A package from the far future! And it contains — dehydrated harem girls.  Just follow the directions that involve adding certain quantities of water and table salt. 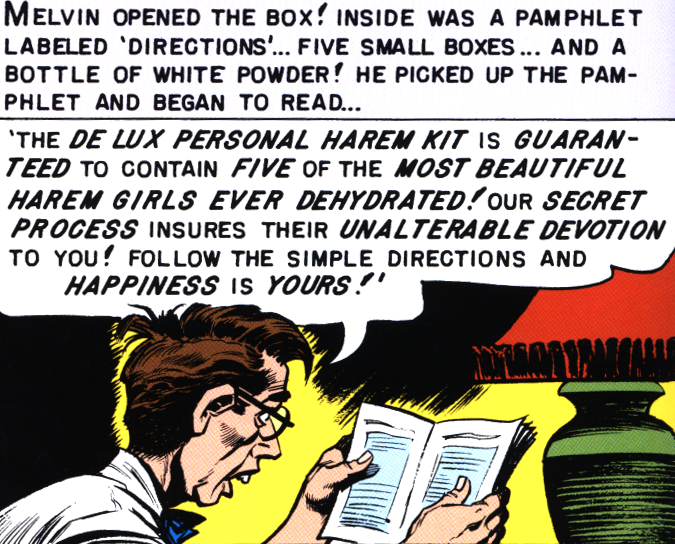 How interesting that there’s still a Post Office that uses physical postmarks in 2952, also that at least some norms of sexual propriety from 1952 continue to flourish almost a thousand years into the future.  (Focus on the Family must be so pleased.)  But one thing that hasn’t endured that long are units of measure familiar to Melvin, or us.  So he has to experiment.  The first experiment produces a girl rather to plump for Melvin’s tastes, so he administers a solvent (included in the package) that causes her to dissolve away, thus the panel above.

Melvin tries the other girls, but manages to mess up their rehydrations as well, making girls to skinny, small, large, etc.  He rejects them all, dissolving them as he did the first.

Perhaps Melvin Sputterly deserves to be a lonely bachelor living in rented rooms.