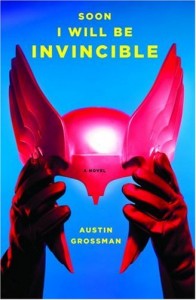 If you want to see a really excellent addition to the canon of mad scientists, allow me to commend to you attention Dr. Impossible, from Austin Grossman‘s Soon I Will Be Invincible (2007).

Soon is a superhero story, basically.  It’s a book for grown-ups, but unlike other superhero books for grown-ups like Watchmen it doesn’t so much deconstruct the superhero genre as take its characters seriously and write a story around them.  Since most of the superheroes and supervillains therein are sort-of humans or at least used-to-be-humans, this means that like any literary characters, they have lives and stories and goals and loves.  And hurts.  Lots of hurts.

Dr. Impossible is one of the two viewpoint characters:  he’s a supervillain, a mad scientist who keeps trying to take over the world.  His tragedy is that even though he has an IQ of 300 he doesn’t realize that the world he inhabits is made of stories rather than atoms, and the rules that govern these stories make it such that he the “good” guys will always foil his plans for taking over the world.  But this doesn’t at least prevent him from almost succeeding a lot of the time, and in the process generating one of the most thoroughly-imagined mad scientist characters out there.  He has internal monologues that really hit the right notes.  (My page references are to the U.S. Vintage edition).

I remember those nights, planning technologies that didn’t exist yet, outsider science, futurist dreaming, half-magical.  The things I could do outside the university setting, now that I didn’t have to wait for the pompous fools at the college!  I was building another science, my science, wild science, robots and lasers and disembodied brains.  A science that buzzed and glowed; it wanted to do things.  It could get up and walk, fly, fight, spout garish glowing creations in the remotest parts of the world, domes and towers and architectural fever dreams.  And it was angry.  It was mad science. (76)

Yes!  Though at the same time, Grossman is really good at showing how difficult and lonely it would be to actually have to be someone like Dr. Impossible. 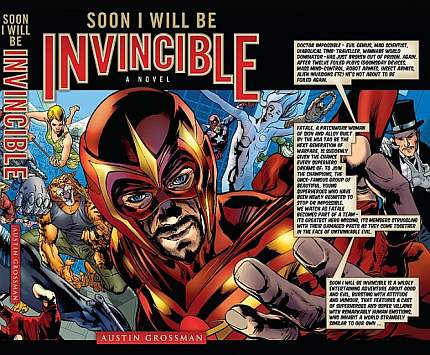 The character is Lily, who as a transparent girl also hits a theme we’ve seen here before. This is her story of transformation from being just an ordinary young woman.

I tripped and fell just like always.  Toppled right off a catwalk and into a vat of some vile liquid…

I went home and showered, but already I felt a change, a stirring in my blood.  A power.  I went up to my room and stood there, looking out an open window at the street outside, white houses.  It was early spring, and the breeze blew in…

I stood in the center of my room.  It kept builting until I was white hot.  My hand set the curtains on fire.  I seared bare footprints into the carpet.  Naked, I made my way very slowly down the hall and through the sitting room, then out onto the lawn.

I looked at myself, changed and transparent and invulnerable.  I stood there with my hardened skin cooling, tickling in the dawn light.  I wasn’t going home anymore. (294)