I want whatever they’re smoking. 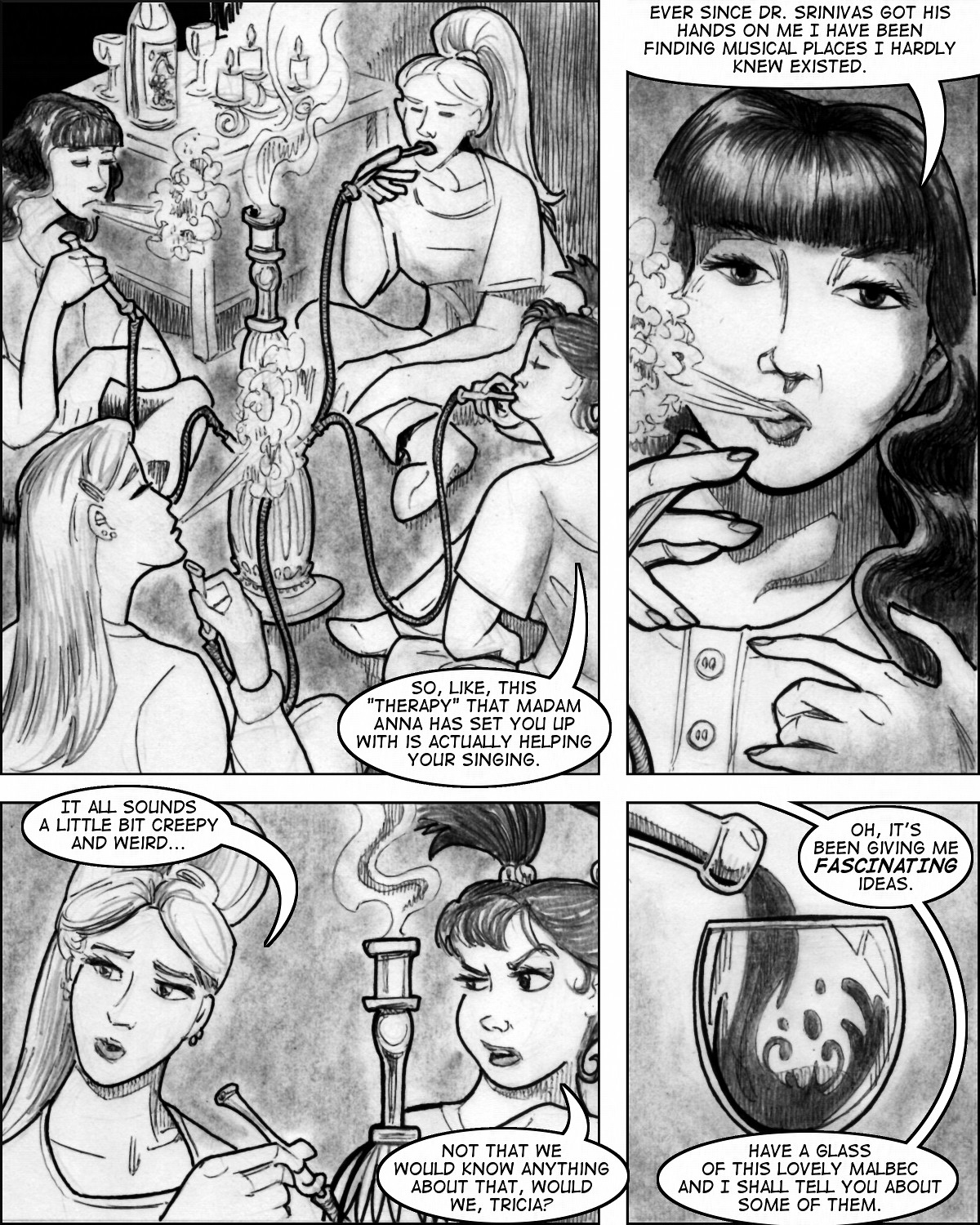 Where Am I: Chapter Five, Page Eight written and commissioned by Dr. Faustus of EroticMadScience.com and drawn by Lon Ryden is published under a Creative Commons Attribution-NonCommercial-NoDerivs 3.0 Unported License.) 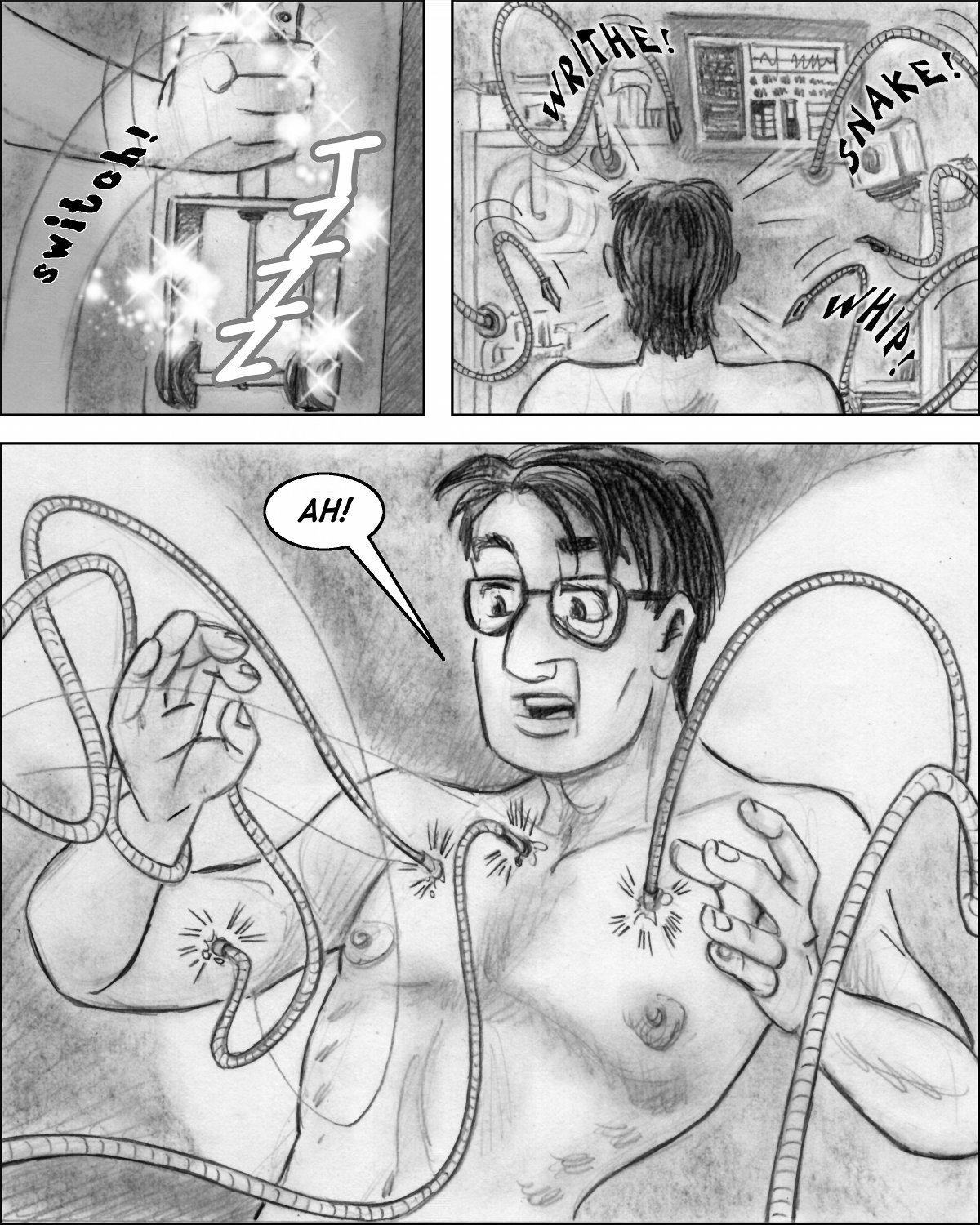 Progress in Research: Chapter Three, Page Twenty-Two written and commissioned by Dr. Faustus of EroticMadScience.com and drawn by Lon Ryden is published under a Creative Commons Attribution-NonCommercial-NoDerivs 3.0 Unported License.)

What’s going on here reminds me of an image not from mad science but from real science, to wit: 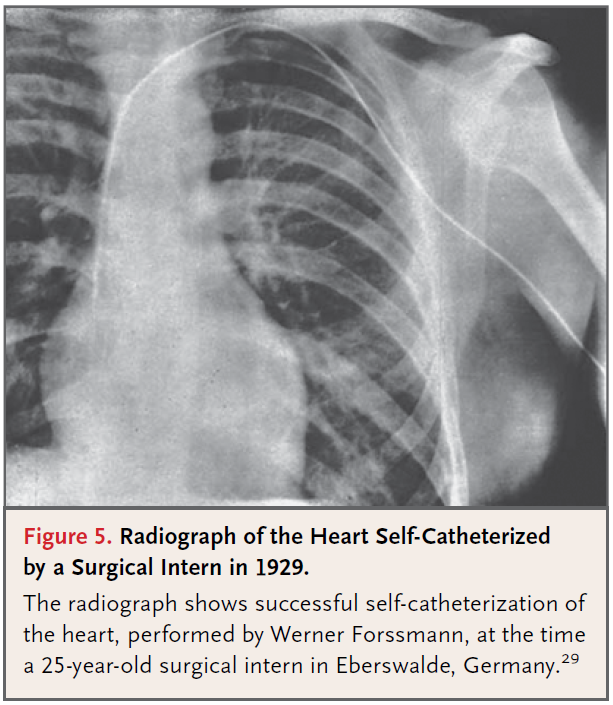 Yes, that right. It’s scientist who stuck a catheter into his own heart. For science. (The image is from El Blog de Cardiología.) The scientist was Dr. Werner Forssmamn, and there is an article at Cracked.com, aptly titled “The 6 Most Badasss Stunts Ever Pulled in the Name of Science” which explains what happened.

Without any supervision, advice, or regard for that concept you call “survival,” he cut a hole in his arm and pushed a catheter all the way up the limb and jammed it into his still-living heart.

A female nurse had volunteered for the procedure, and while he wouldn’t risk anyone else (perhaps shouting “Dammit, it’s too dangerous!”), he needed her to hand him the necessary surgical tools. So he laid her on the surgical table, gave her a painkiller, then performed the procedure on himself while she wasn’t looking. That’s right, this guy shoved two feet of cable into his own cardiac system as a sleight-of-hand trick, thereby permanently upstaging David Copperfield 27 years before he was even born.

He then walked–WALKED, mind you–with a tube hanging out of his fucking heart like some kind of price tag to the X-Ray room and presumably said “Hey guys, check out what I just did.”

He got a Nobel Prize, eventually. But I’m wondering about that nurse who volunteered for the procedure. She seems to me like a real-world Kitty Carroll if there ever was such.

(The second part of a short essay.)

So why would anyone get so much of a frisson out of Kitty Carroll and her many (but not enough) sisters in the world of erotic mad science? There’s a simplistic answer, which is that putting pretty, scantily (or un-) clad women in a situation that sets the adrenaline going (whether out of fear or anticipation or for whatever reason might not matter much) is something that my Male Gaze naturally wants to be directed towards. Well, that’s fine, but it doesn’t really help distinguish the Kitty Carroll from the Distressed Damsel, who is also scantily clad and in a situation that will get anyone’s heart pounding. Why go to the trouble to find (or the even greater trouble of creating) Kitty Carroll’s when there are so many Distressed Damsels?

I’ll venture an explanation, one which begins, rather counterintuitively, in pessimism, a sense that human existence isn’t really that good. Having reached full middle age I find that I cannot dispute George Orwell’s casual dictum that while most people get a fair amount fun out of life, on balance life is suffering and only the very young or very foolish think otherwise. I am more than half convinced by David Benatar‘s rigorous argument that coming into existence is always a harm and that it would have been better never to have been. But I have been, and am, and being in full middle age I’m embedded in a web of human relationships that I cannot countenance tearing myself out of, and so on things go.

Now I’m not so pessimistic as to think I’m helpless in the face of life’s suffering. We can’t abolish our suffering but we can always palliate it, and encounters with the erotic are splendid palliatives. Intense pleasure makes us forget about both life and death, so much so that even the contemplation thereof in fiction helps lighten our burden. This aspect of imaginative contemplation is a large part of the reason why I write and publish Tales of Gnosis College. It’s time and resource intensive, believe me, but it also does a lot to make my life bearable. A little pleasure from one’s hobbies does a lot to push back the day when one aches to reach for the Nembutal (I realize it’s not generally available, but you get the picture). And my publication efforts might provide others with a little pleasure, helping to push back their own dark thoughts and the dreadful sequelae thereto: if that’s not hedonic philanthropy then what could be?

As we contemplate pleasure enough, we dream. 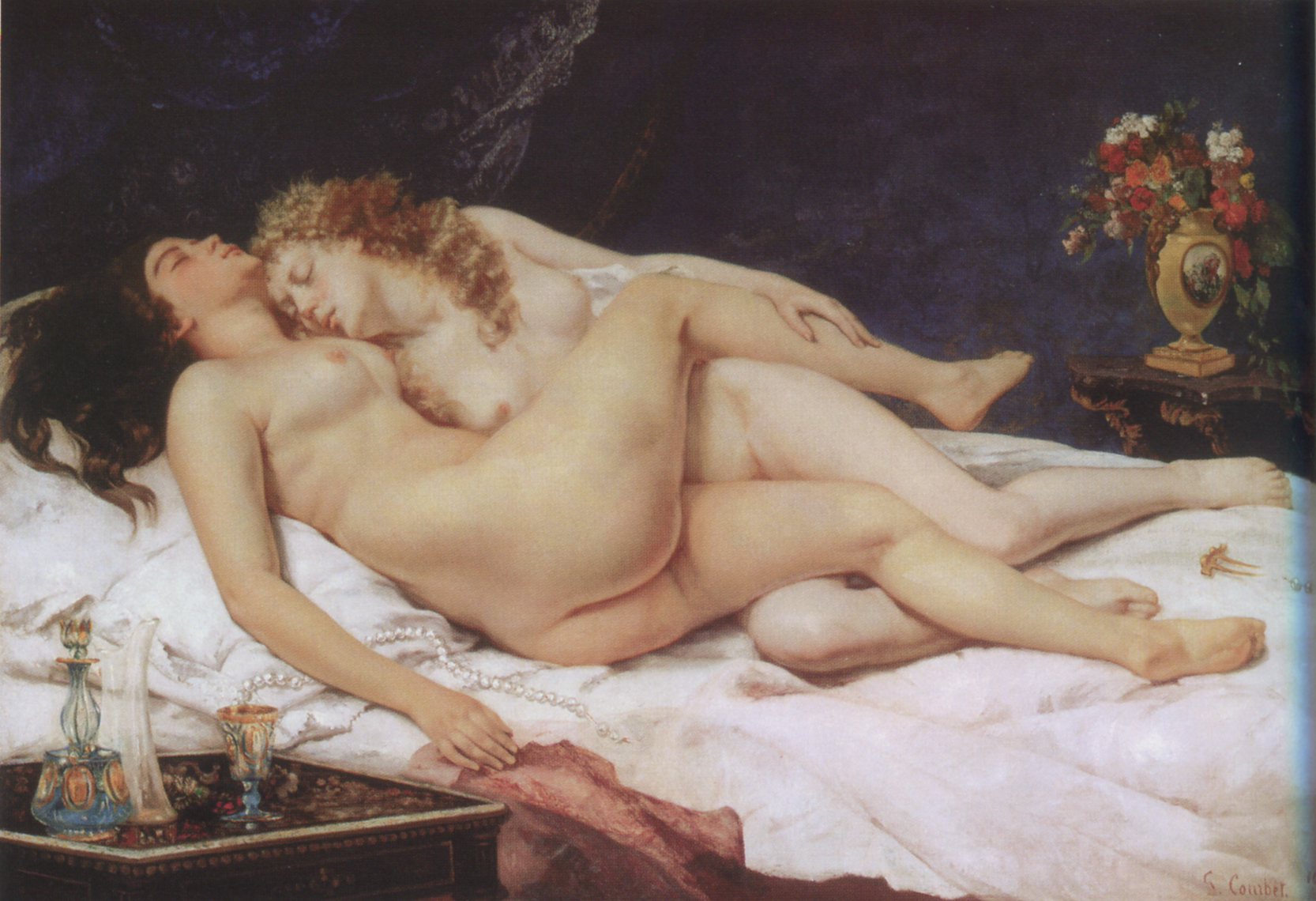 Some of us dream of the possibility of pleasures such that no human has ever had them or probably ever could. It seems only sensible, somehow: since being human sucks why not imagine transcending human possibilities? Thus the appeal of the mad science, and thus the appeal of the scenario of the mad science embraced with enthusiastic consent and quivering anticipation rather than contemplated with fear.

But why women? Wouldn’t it be easier for this male author to identify with male characters? Why not Charlie Carrolls? I suppose that we could always think back to the Male Gaze, etc., but I suspect that something else is going on here. I have this belief, motivated perhaps in part by observation of multiorgasmic female partners in my own experience, and perhaps partly by science that suggests that women’s sexuality is more fluid than men’s, that the erotic possibilities of women are somehow just wider and deeper than those of men, that Tiresias of myth spoke truly when he told Zeus about sex that “of ten parts a man enjoys one only.” 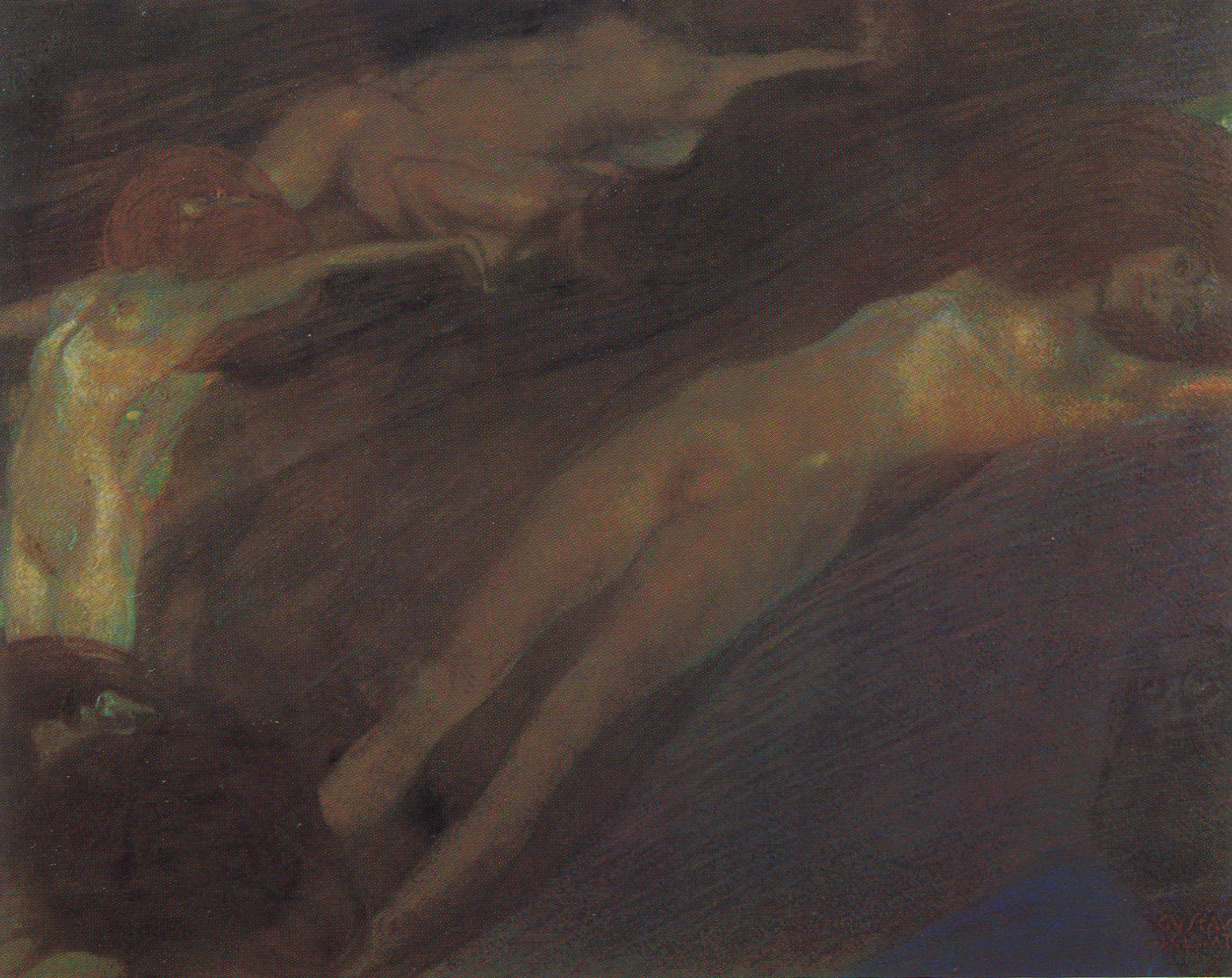 Hence the search for Kitty Carrolls.

(This is the first part of a short essay.)

Utter the phrase “female experimental subject in mad science” and I’ll bet that the first image that nine out of ten hearers conjure in their minds would be something like this: 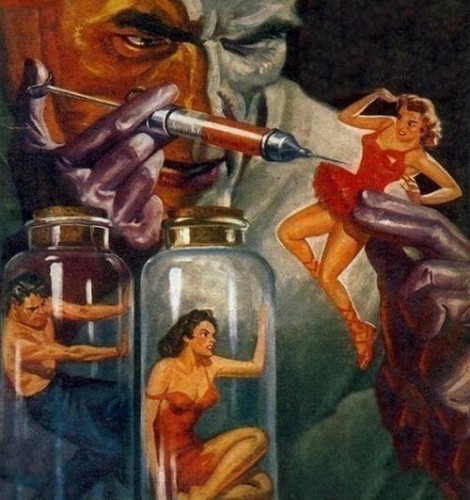 (Found at Storybook Whorehouse.) Call her the Distressed Damsel. A beautiful woman captured and restrained (or sedated), stripped either completely or at least down to scantily clad, and then forcibly subjected to some obscene, perversion of nature technological intervention. The Distressed Damsel might be doomed to perish or to some fate even worse than that (as a way of establishing the wickedness of an antagonistic mad scientist), or might exist for the purpose of being rescued by a hero. As John Villalino has pointed out, many mad science stories will contain at least one Distressed Damsel of each type. One goes to first to her mad science doom as a way of establishing the antagonist (and, of course, allowing the audience to enjoy the titillation of watching her get bound, stripped, and mad-scienced up), while the other will be rescued as a way of bringing the story to what most viewers would find a morally satisfying conclusion.

I won’t deny that the Distressed Damsel story has its charms, but somehow I find myself even more excited by a rather different kind of story, one built around a kind of experimental subject I’ll call the Kitty Carroll. An image for her: 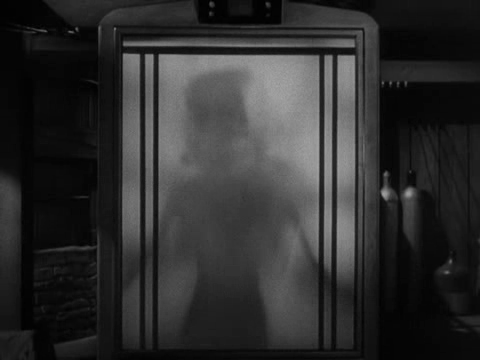 That’s Kitty Carroll, being turned invisible in the 1940 film The Invisible Woman. Something important to note about this female mad science subject: She might be naked (albeit demurely behind a screen as this is a 1940 movie), but she’s not in restraints, she hasn’t been kidnapped, she hasn’t been sedated. She’s here as a volunteer, answering a newspaper classified ad. Her response to the mad science? I want a part of that! As I wrote about her two years ago:

Let’s reflect on what Kitty has implicitly gone for here: “So, you want me to take off all my clothes, step into this machine that has hitherto never been tested on a human being, zap me with heaven-knows-what, and turn me invisible? Sure, I’m game!”

And dammit, I think I’m still in love. The kind of fiction I create shows a longing for Kitty Carrolls wherever I can find them. The first instance that Lon illustrated for me in the first chapter of The Apsinthion Protocol: 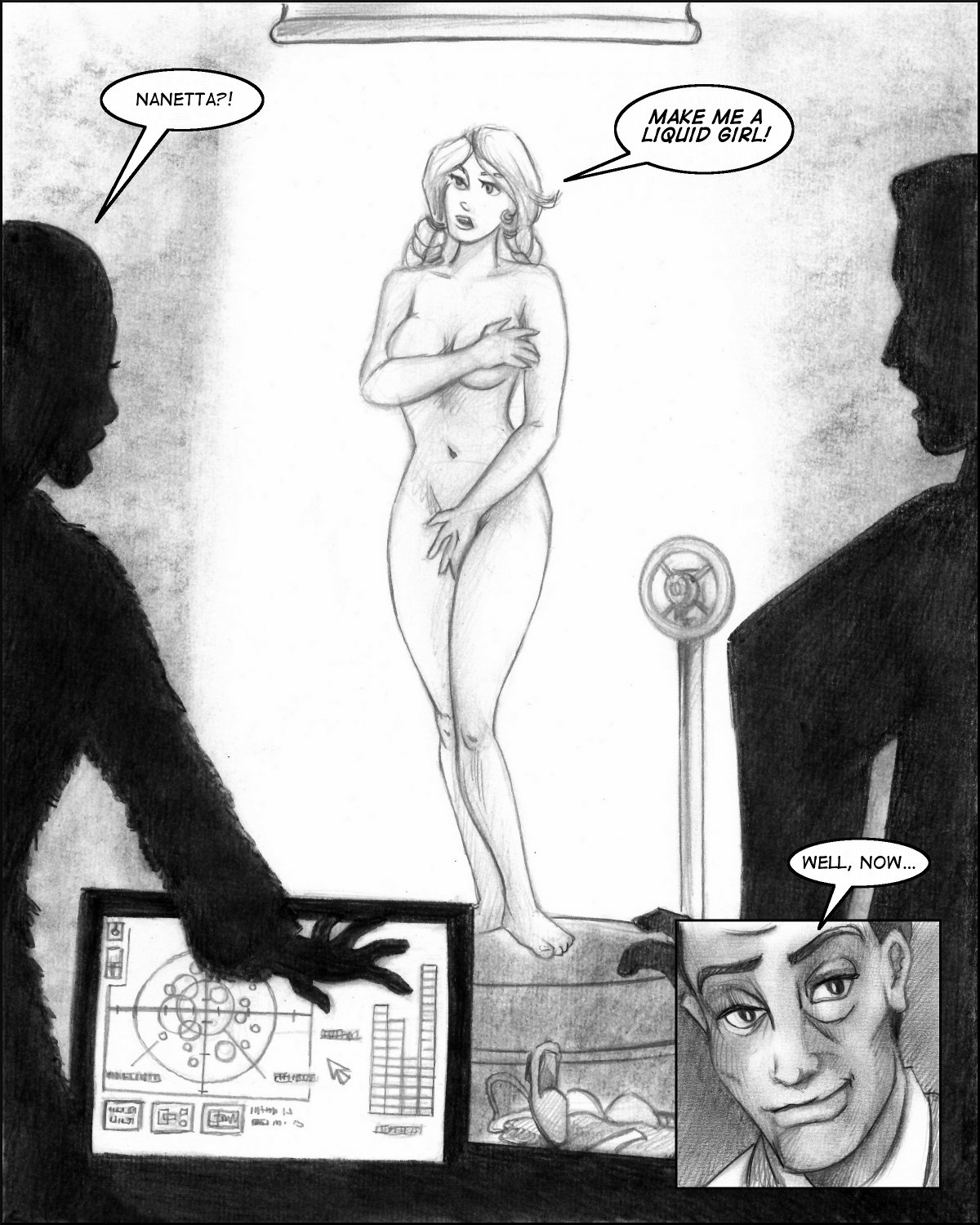 Nanetta Rector embraces the mad science rather than fleeing from it. As will her friend Moira Weir. As will all four of the heroines of Study Abroad, albeit with a little pharmacological boost from Dr. Strangeways. Kitty Carrolls all.

I wish I could find more examples of Kitty Carrolls in fiction created by professionals — perhaps the paucity of such are a good reason for making my own. To be sure, I can think of a few. Janice Starlin in Roger Corman’s The Wasp Woman might be an example of one — she pushes really hard to get the mad science youth-making transformation tested on herself. I’ve suggested before also that one the most erotic things I’ve had about Invasion of the Bee Girls is not so much a scene (hot as the transformation scene is) as a thought: that Dr. Susan Harris, the lady mad scientist and head Bee Girl, is herself a Kitty Carroll, that everything we saw being done to Nora Kline as a Distressed Damsel — getting naked, getting irradiated, getting smothered in goop and covered in bees, and transformation into some sort of seductive, lethal transhuman — Dr. Harris must have done to herself at some point to become what she is by the time the movie begins. Talk about embracing the mad science!

I think perhaps I’m in love in a way that will probably be the end of me, but it will be worth it.

And why am I so in love with Kitty Carrolls? Tomorrow I get to embarrass myself with psychological speculation.