John Villalino continues rolling out Pretty Vacant: Final Repose, and I am delighted to be able to offer Page Nine as a teaser: 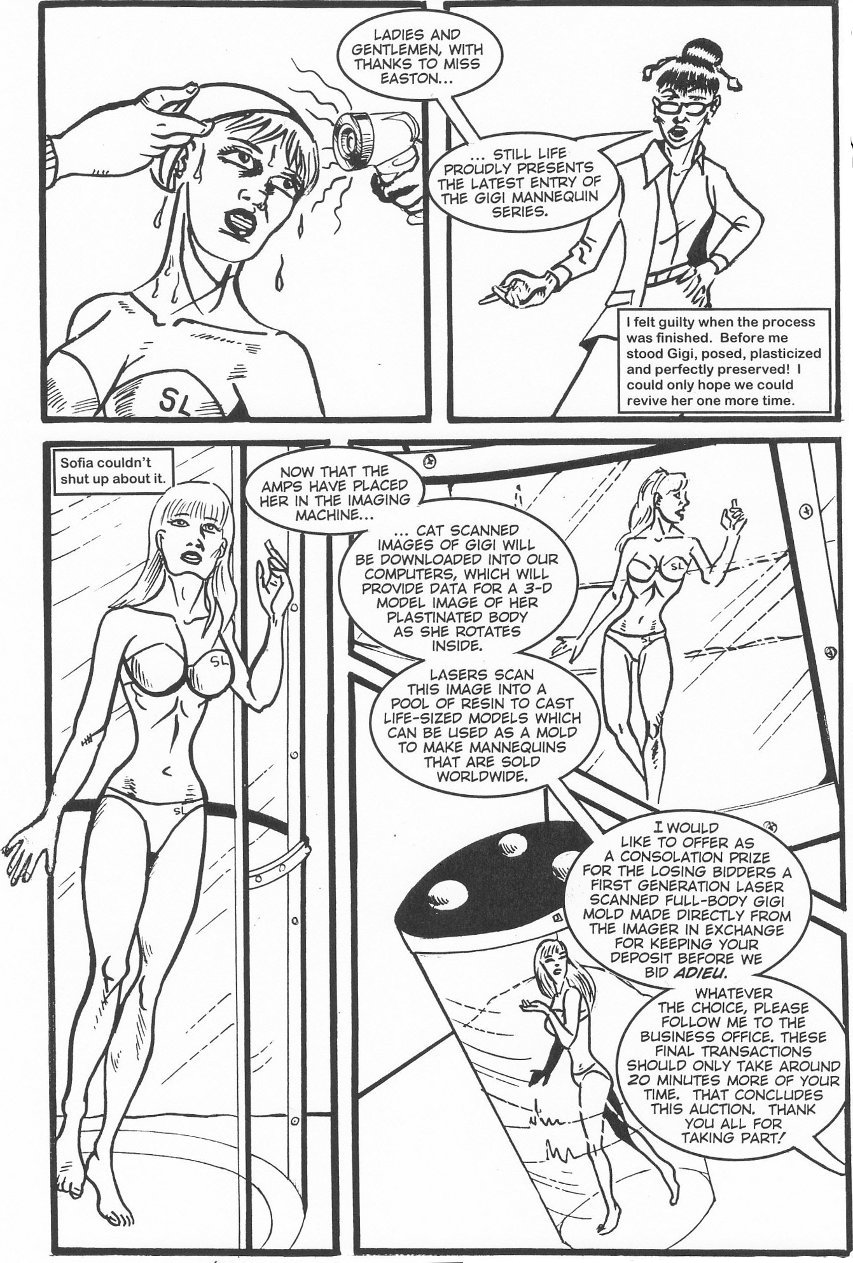 John’s imperiled heroine Gigi is being rotated in a tube and scanned for the purpose of making a 3D computer model, a procedure which tickles me because it has a clear antecedent in a favorite mad-science movie Looker (1982), in which a character played by Susan Dey underwent a similar procedure: 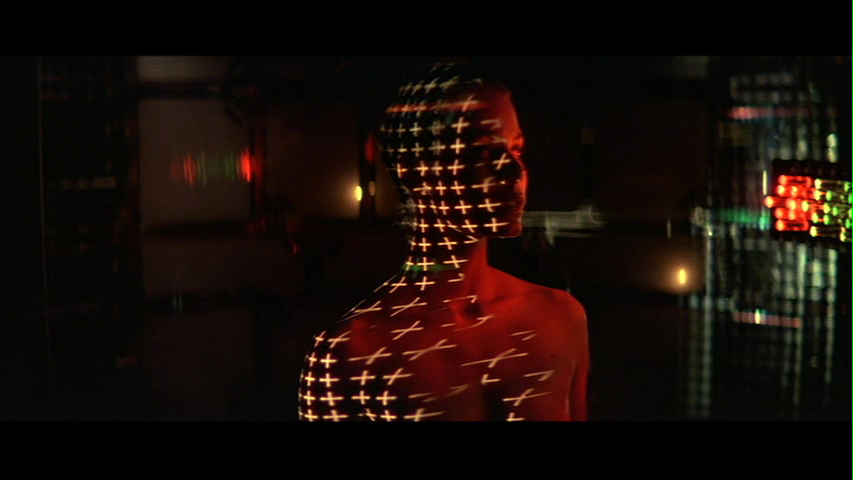 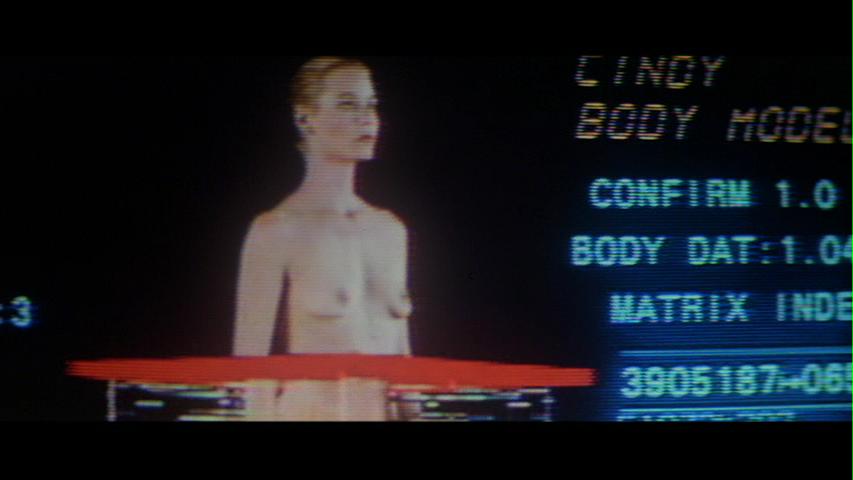 The whole book is expected to be published in time for Comic-Con (July 12-15), and John expects to be around, mostly at Bare Bones Studios Booth E-7, although he may be on panels or otherwise just enjoying himself part of the time. Stop by and say hello and pick up a copy of Pretty Vacant. For extra credit, tell John that Dr. Faustus sent you!

John Villalino has sent on a sneak peak at Final Repose, the latest chapter of his freeze-themed comic Pretty Vacant. On this page on of his heroines, Gigi, is frozen and about to be auctioned off. And I suspect her eventual buyers will not have very nice plans for her… 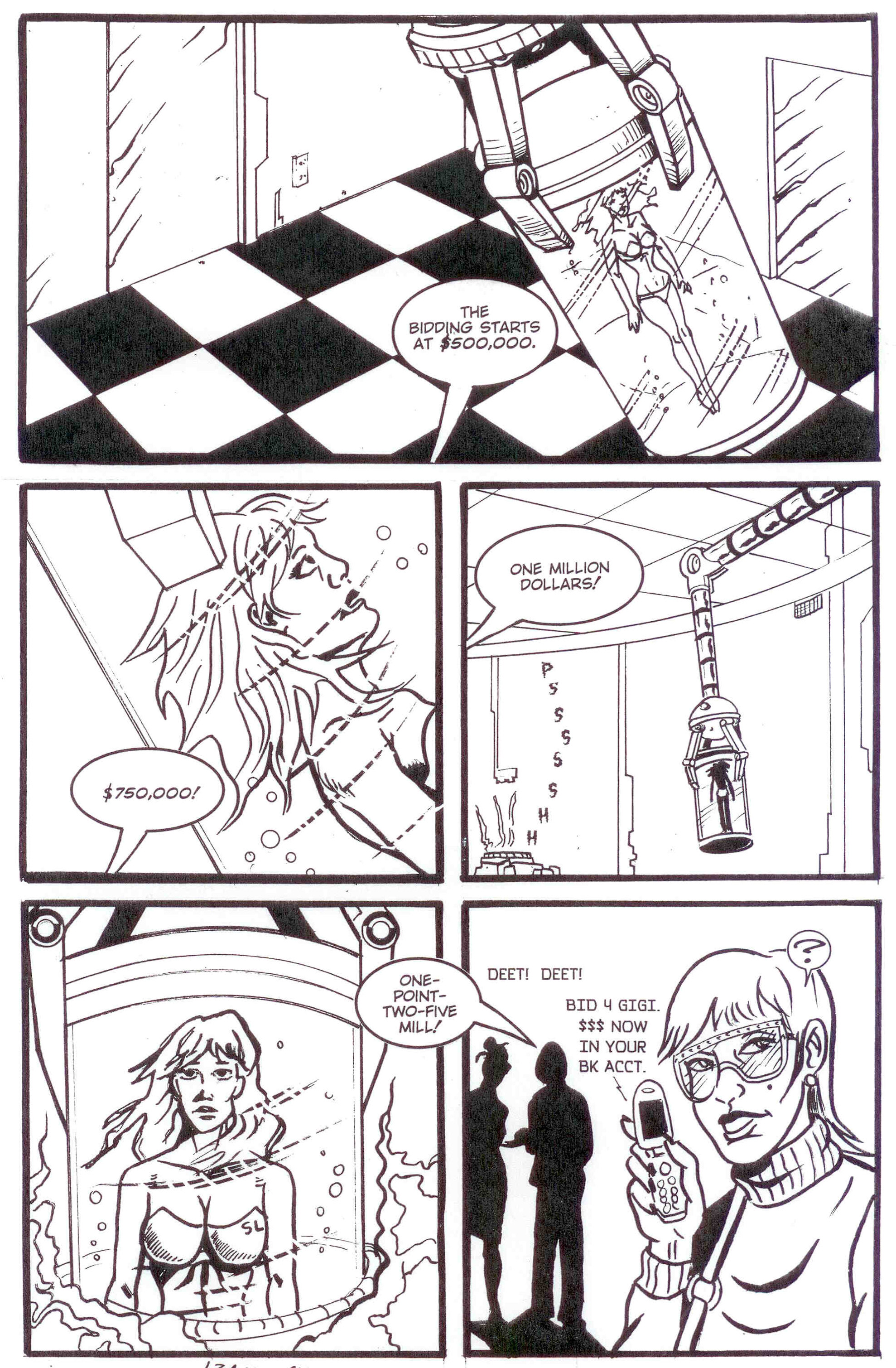 You can click through for much larger size. The image is used here with the kind permission of the creators.

Pretty Vacant is a comic book after the classic fashion, printed with ink on paper and everything, but if you surf on over to John’s site it should be easy to find the means of getting touch with him and procuring your very own exciting copy. Don’t miss out!

It is my pleasure to announce the addition of Artisanal Erotica to the blogroll here, a very promising-looking story site clearly being run by folks who are taking the process of making their own seriously.  Plus they have a lovely header illustration of the process of one-handed reading.

I must confess somewhat shamefacedly that when I first saw their URL, though, I experienced a real-life version of The Problem with Pen Island trope, so I guess I must count as a pervert through-and-through.

Footnote:  I believe this is the 800th post here at EroticMadScience.  And it seems like only yesterday I was scratching my head and wondering how this WordPress thing was supposed to work…

Distilling many pop-cultural inspirations, of which perhaps the most central was an outrageous 1966 spy-thriller Kiss the Girls and Make Them Die (very hard to find, though there is a trailer on YouTube), writer John Villalino has been busy creating his own comics series, Pretty Vacant.  And it’s a blast! 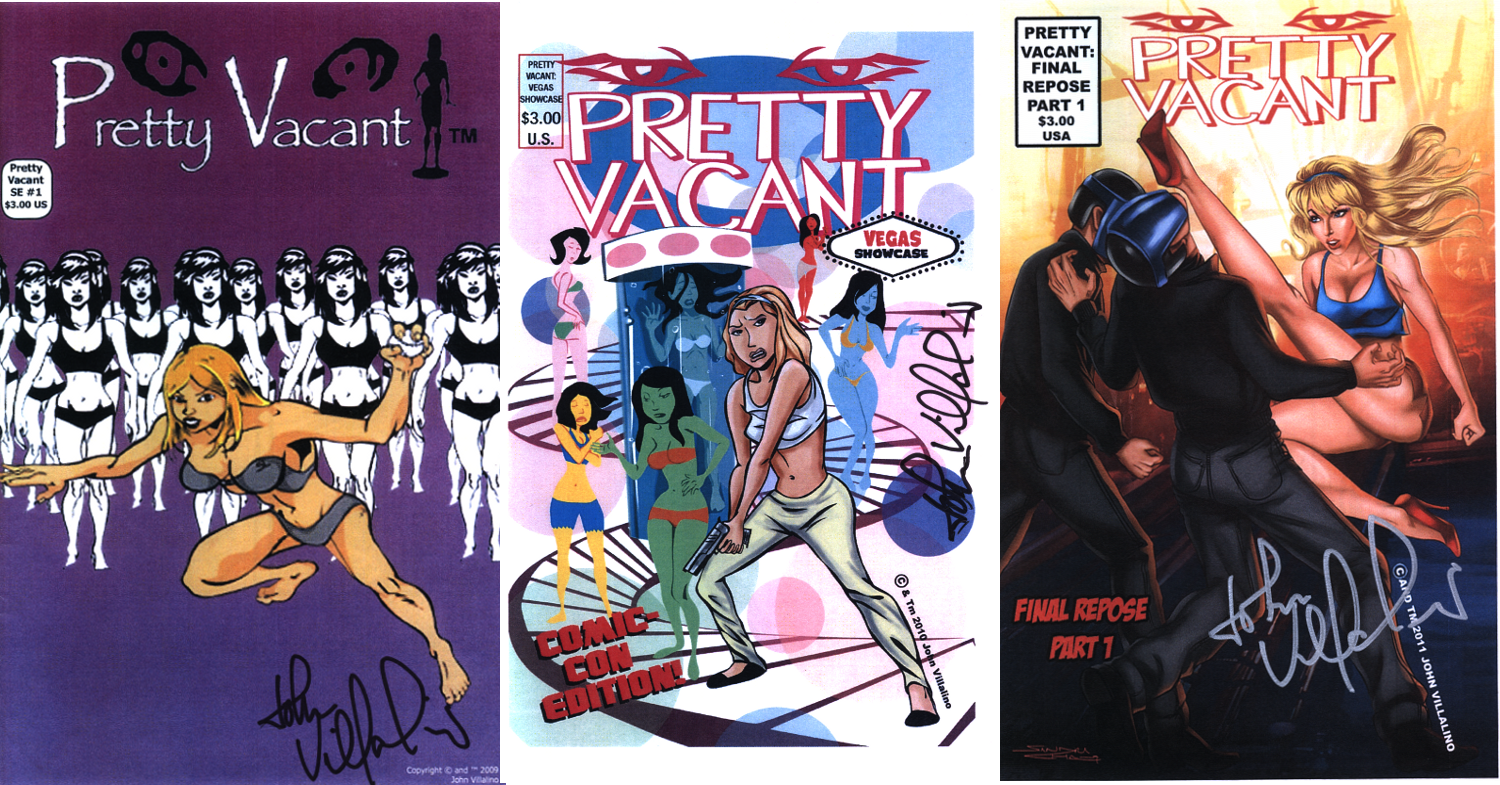 Gorgeous athletes are disappearing, only to show up in images as astonishingly lifelike mannequins produced by the shady Still Life Corporation.  I don’t want to give away spoilers on the plot, except to note that something very A.S.F.R.-ish is going on… 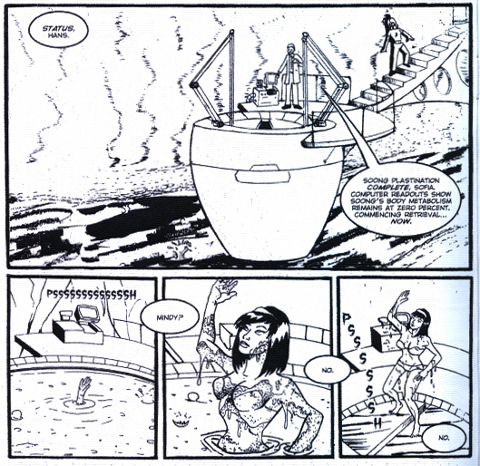 Uh oh.  Will an athlete heroine and a heroic accountant (yes, heroic accountant) be able to save their friends from a fate prettier than death?  Well, you’ll have to read the comic to find out.  You can get in touch with John Villalino via his contact page here.

As for Kiss the Girls…  embedded for your convenience.

After today my interview with Drake will speak for itself over at Medusariffic, but before I do that I just need to add a word of praise of his answer to one of my questions. 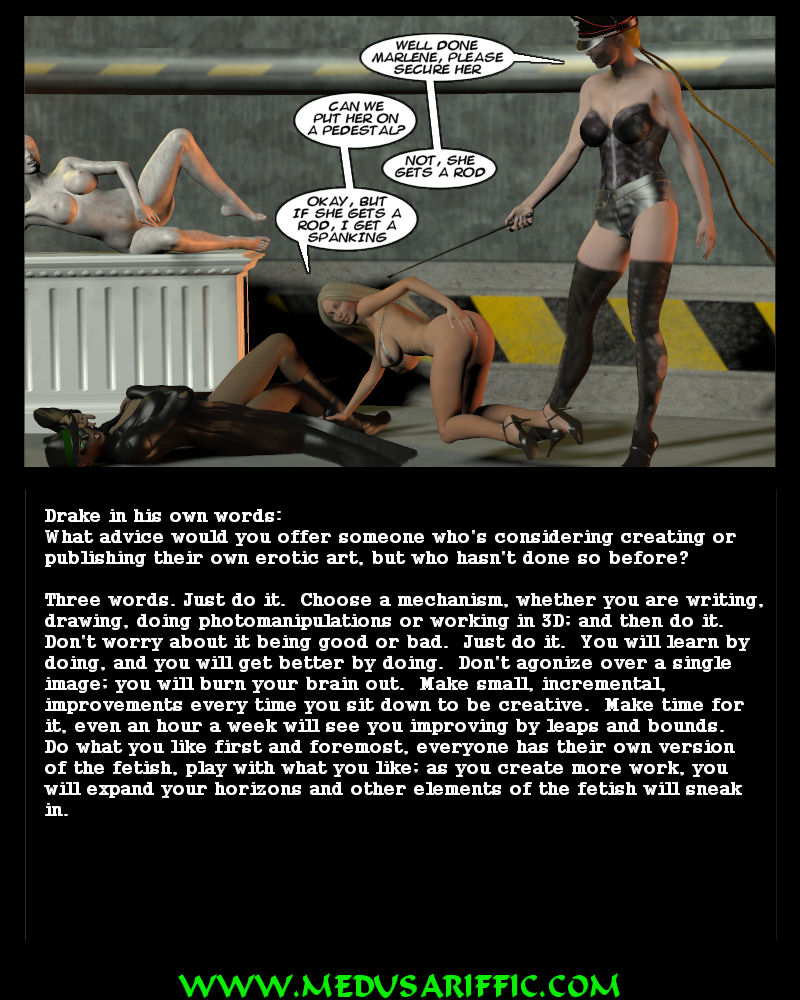 Yes.  Absolutely the right answer.   Just do it.

And to see just how it’s done, head over to Medusariffic starting tomorrow and download the whole interview issue (#60).  That’s good reading.

One of the questions I posed to Drake at Medusariffic was “what of you work was your proudest of?”  He answered me thus: 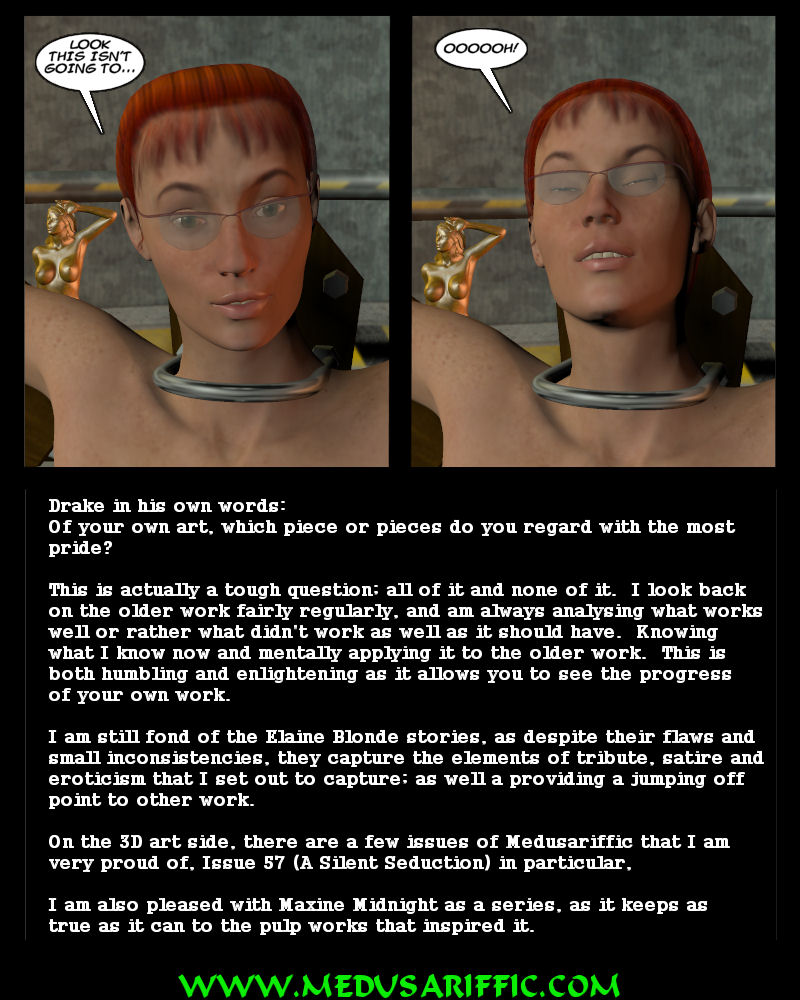 Now it’s perhaps unfair of me to ask questions only without answering a few myself.  My own question to me would be, “What among Drake’s work gave you most joy?”

I think the answer up until now would lie in a sequence that lies within a hundreds-of-panels-long sequence Drake created as a Halloween special a few years back.  The premise behind the narrative is that a bunch of Drake’s cast of characters gets together for a big Halloween party.  Everyone dresses up in costume and then runs about playing a very literal version of freeze tag — get caught and you get turned into the statue.

One guest at the party is named Venus Red.  A newbie at the whole “turning people into statues” thing, she witnesses going-on from the shadows and finds herself…strangely attracted to the proceedings.

Perhaps inevitably there comes a moment of seduction. 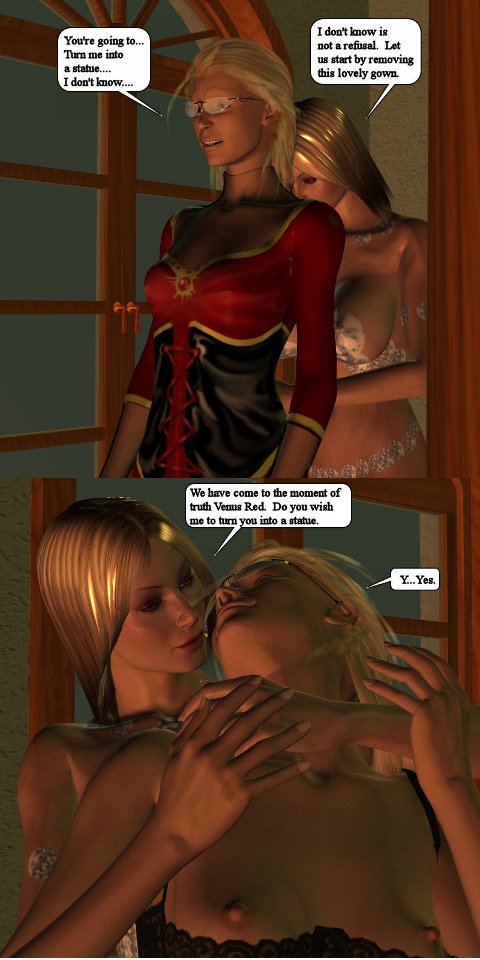 (Lots like I put in a little sneak preview of my own for Apsinthion Protocol there…)  Of course, Drake managed to top himself with a special moment for Faustus at the end of the forthcoming issue.

What is it?  Well, I’m not giving it away — you need to drop by starting on May 1 and see.

I wish everyone would write and publish their own version of A Thaumatophile Manifesto.  Things like that show the world that we kinksters are for real.  We have stories and inner lives.  We have become what we have learned ourselves to be and we feel neither shame nor fear at what we are.  And they reach out to people who can be our friends:  as that most excellent blogger Furrygirl once put it:  “Fetishy porn is a tool for change. For reals! It gives the people not in urban kink bubbles a chance to see that other people are like them.”  My own experience of being interviewed at Atrocidades.net a little while back gave me an idea to try eliciting other folks’ stories but setting up interviews of my own.  I was very pleased to be able to do one of my own with mind-control comics creator Dr. Robo last month.  And this month I had the singular honor of being to pose my nosy questions to an artist I’ve long admired (and occasionally featured), whose commitment to a mad science-related A.S.F.R. fetish is a true wonder to behold.

This is Drake of Medusariffic, the 3D comics artist (primarily:  he started with live-action alters and recently has been moving into animations and small flash games) behind Medusariffic.  He took my interview questions and really ran with them, and the world is in for a treat as a result:  a whole issue of Medusariffic’s online comic, starring its pulchritudinous cast and illustrating a Drake-in-his-own-words interview.  Right on the first page Drake shows both that he knows how to deploy the tropes while writing zippy lines. 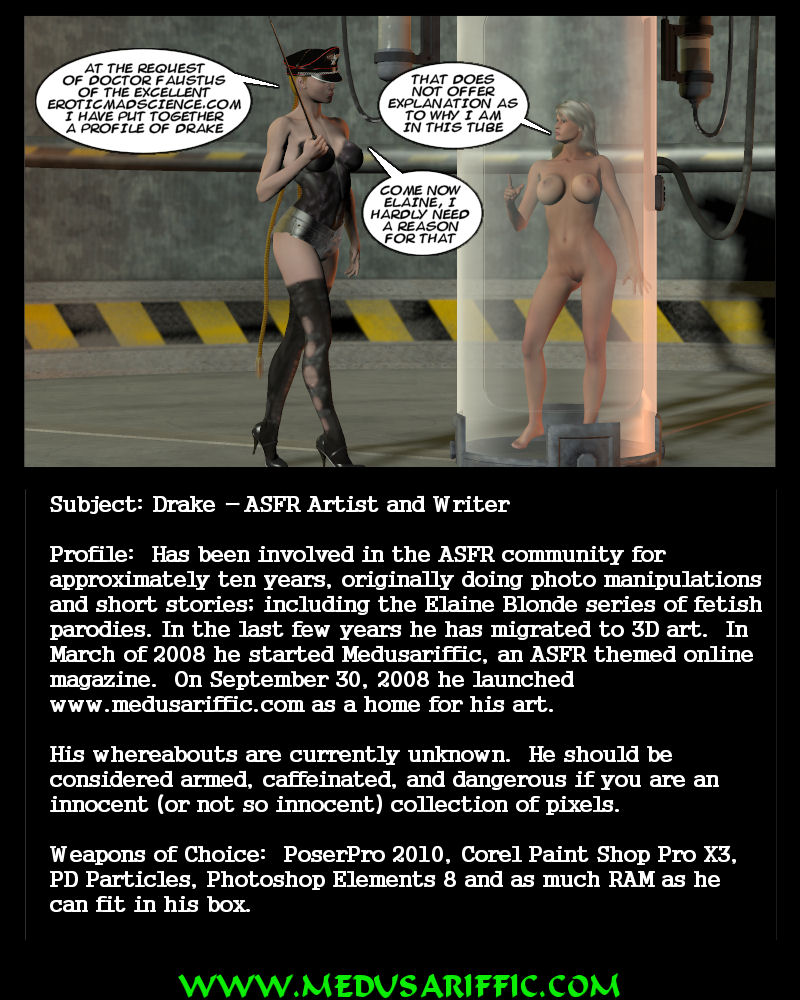 (Click for larger.) The whole thing will go up on May 1, but I’ll offer a few teasers up until then.

Well, she dunnit again, and this time even better, ‘cuz she when went and made a tube girl out of herself. Wow!  I won’t reproduce Dyna’s work here, not because it isn’t quite fine but because I want to encourage you to head over to her blog and have a look for yourself.  I will give you a little teasing hint, though, as to the image’s contents, for not only do we get Dyna looking fabulous as always, but we get some sort of mad figure as well.  Who he is I’m not sure, although I have a sneaking suspicion that he might be related to Lon Ryden’s Little Green Bastards, particularly in this incarnation.

So head on over and show Dyna some of the love she’s earned here:  while there, you might want to browse through some of her other fantasy live-alters.  And note also that she’s doing it as part of a series of requests, so perhaps you might want to ponder that as you do.  For my part I’m full of admiration, and not just because Dyna’s lovely to look at, but also (1) because she’s doing something I strongly encourage you all to try and (2) because she’s lovely to look at, her efforts most definitely count as hedonic philanthropy. 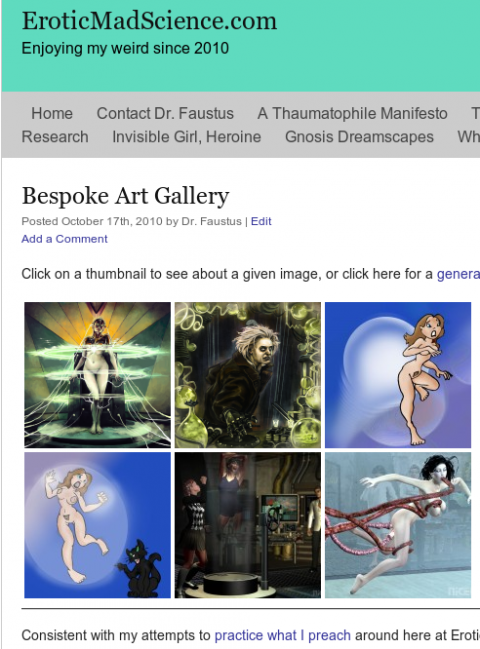 As the screenshot indicates, you will now be able to reference art by thumbnail, and get summaries of information about the artwork.  While the gallery is still in development (and might change in the future), I do hope it will be helpful and agreeable to readers.  Enjoy! 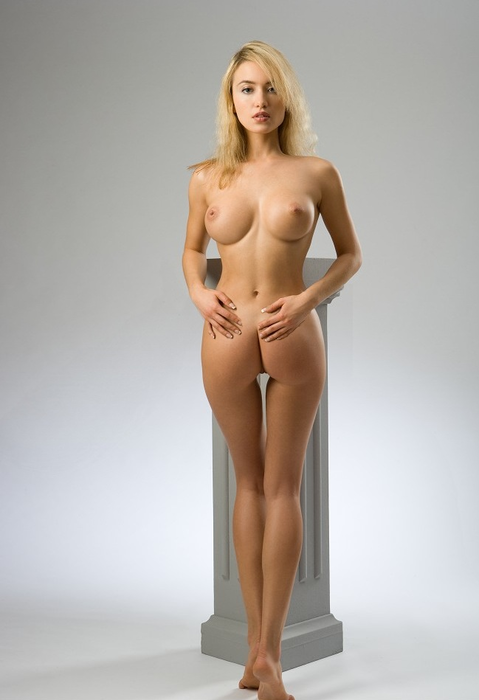