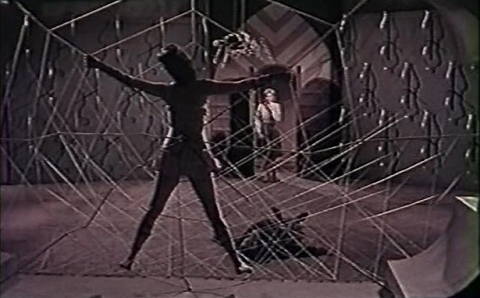 The plot revolves around a group of models who, together with their photographer, publisher, and a writer, stop a spooky old castle in order to shoot covers for a series of horror novels.  Hardly the worst idea anyone has ever had (I’ll bet kink.com could have great stuff with the setting) but unfortunately this particular spooky old castle turns out to have been the execution site and final perhaps-not-resting place of a sadistic killer “from centuries ago” called the Crimson Executioner.

Uh oh.  Well, as you can probably guess things are not going to turn out very well for this exceedingly dim-witted ensemble as they are stalked about the castle and cruelly done in by a mysterious killer.

The spiderweb is one of the killer’s ploys.  One of the characters is bound in it.  The ropes across the floor will trigger a cascade of arrows at her if touched, and thereby turn her into something like St. Sebastian.  Meanwhile, the exceedingly cheesy fake spider is working its way toward her, complete with lethal venom.

The actress playing the part (I believe Moa Tahi, whose film credits include such interesting-sounding projects as The Topless War and Dr.Goldfoot and the Girl Bombs) manages to look the part of someone in her situation. 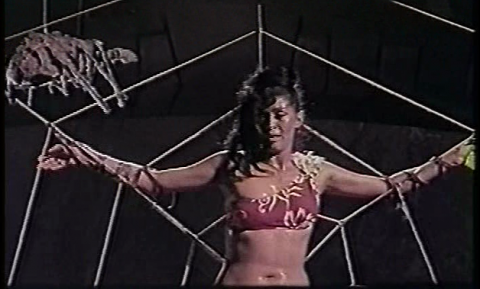 Bloody Pit of Horror ain’t mad science (although the spiderweb thingy is almost technological enough to qualify), but it sure keeps up a level of stupid that kept me laughing; it might also have some appeal for fans of dungeon and torture scenarios.  We also get to see Mickey Hargitay, then-husband of Jayne Mansfield and father of Mariska Hargitay, chew the scenery in a villain speech in which he denounces women for threatening to ruin the purity of his perfect body and declares his intention to purify the world through murder, all the while rubbing his half-naked body with oil.  Hmm….

It’s also in the public domain and available at the Internet Archive.  I embed below.  The color is rather washed out (the Crimson Executioner barely makes it to Salmon Executioner here) and the dubbing adds a level of hilarity.

I recommend watching with the help of your robot friends.