So Cambrian reaches the culmination of its plot when Hot Lady Scientist, having had enough of being molested by sex machines and otherwise subject to abuse, transforms herself into some sort of spiky blond valkyrie-demon, breaks out of her bonds, slays Junior Mad Scientist, forces Bad Girl to flee into a conveniently-large airshaft, and then liberates Nerdy Assistant, who had been chained up and subjected to abuse by Bad Girl for some reason.

There is then a meeting of the minds. 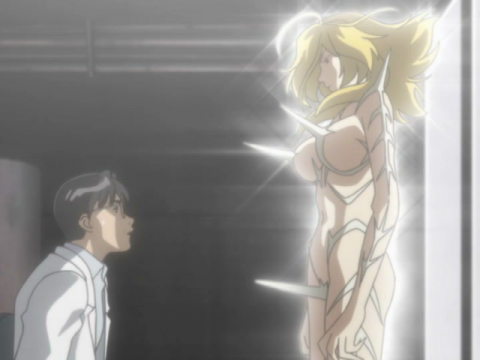 This is what I am. Can you still love me?

Nerdy Assistant stands up, then kneels down, grasping the spike growing out of Hot Lady Scientist’s crotch. He points the spike at his own throat, and speaks.

The surprisingly understated scene that follows is an exterior view of what we know (from its having been established earlier) of Hot Lady Scientist’s laboratory building. It would seem that we are being invited to write our own ending in our imaginations here, but at the same time it seems like a moment of acceptance, of embracing what you are (or someone else is) even if that seems monstrous.

And that, dear readers, is what puts Cambrian just a little bit beyond just another tits ‘n tentacles story, at least for me.