Well mad science fans, the long wait is finally over.  Just out from Circlet Press: 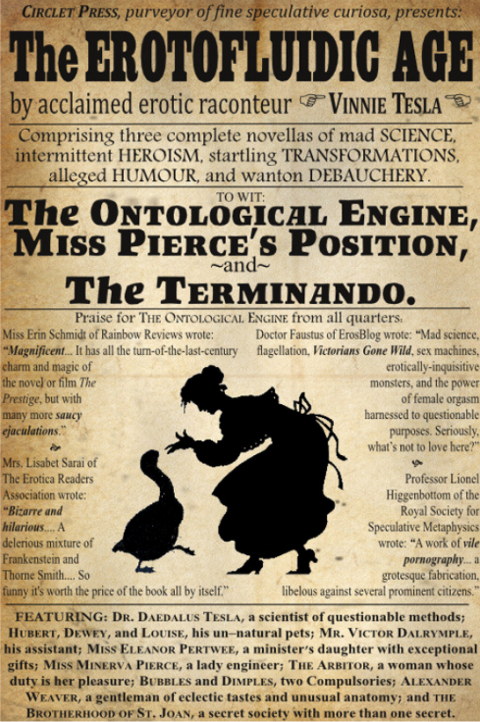 The story starts when Daedalus Tesla, a brilliant but eccentric scientist, is obliged to leave his position at an unnamed Cambridge college when it is discovered that he has been using the wife of a professor in his experiments.  Entirely innocent and in-the-interest-of-science experiments, of course, but it’s the Victorian era and people are prone to drawing unwarranted inferences.  Removing to his country seat, Tesla continues his experiments, taking into his confidence and employ an engineer named Victor Dalrymple.  Along the way they attract into their circle Eleanor Pertwee, the comely vicar’s daughter whose consciousness has clearly been strongly shaped by reading French novels…

Tesla is working on what he calls “ontological forces,” primal currents in the very structure of reality which, with enough mad science apparatus and an appropriate power source, can be attracted and focused in a spatial locality.  The “appropriate power source” is, unsurprisingly, human sexual energy (of which Miss Pertwee just happens to have in abundance) and the consequences of their collection are to effect fantastical metamorphoses that would Ovid himself swearing off the bottle.

We follow the story through many evolutions, introduced along the way to a set of strange siphon-headed creatures called geoducks (and if you actually know the correct pronunciation of “geoduck,” give yourself a gold star), a set of improbable and socially-awkward transmogrifications, and a randy lady engineer.  The long culmination of of the story involves ontological-energy-powered travel to an alternative-world England in which state-sanctioned sex conscription has been introduced (shades of Slaveworld!).  Among the inhabitants of the alternative world are an unusual group of people called “violas,” whose presence makes possible narrative sentences like the following.

Lacking any objections to his implicit demand, I turned my attention to lapping at his engorged clitoris and pressed a finger into his vagina, finding it quite as wet and swollen as I had anticipated.

Yes, that does read his clitoris and his vagina.  No, it isn’t a misprint.  Yes, it does make perfect sense in the context of the story.  But no, I’m not going to explain it here.  If you’re curious, you’ll have to read it to find out how it works.

“I’m afraid the ——shire Teslas are a scant three centuries in these parts, having constructed Tesla Hall inthe reign of Queen Elizabeth. We are a restless people, and no doubt will be moving on again any century now.”

That reminds me of P.G. Wodehouse more than anything else.  It takes a deft touch to blend comedy, pornography and science fiction like this.  A judicious reader should also be impressed especially by Vinnie’s female characters, which are much the way I like them:  adventurous, outspoken, and bold.  Alternative England also has in it a female official called the Arbitor who’s quite appealing, in a fearsome sort of way.

Enough of me:  I urge you to get out there and read.  The Erotofluidic Age is available in mere seconds as an e-book through the modern miracle of digital-encoded electrotelegraphic transmission at Circlet Press here or Amazon here.  In addition, you can read Vinnie’s own comments on the work at the Circlet Press blog, accessible here.  Enjoy!