As long as we’re doing some role reversals here…

A lady scientist (mad I hope!) graces the October 1943 cover of Fantastic Adventures. She was painted by Robert Gibson Jones (1889-1969). The story which I believe it is illustrating, Frank Patton’s “Jewels of the Toad,” has an interior illustration by Virgil Finaly, which is typically exquisite.

Women creating seems to have been a theme for this issue. Florence Magarian was called upon to do an illustration for Don Wilcox’s “World of Paper Dolls,” about a girl who makes people. (The image below is my composite across two pages).

This issue is available for reading and download at the Internet Archive.

Be warned, however, that this issue contains a story titled “Mystery of the Creeping Underwear.” No joke. 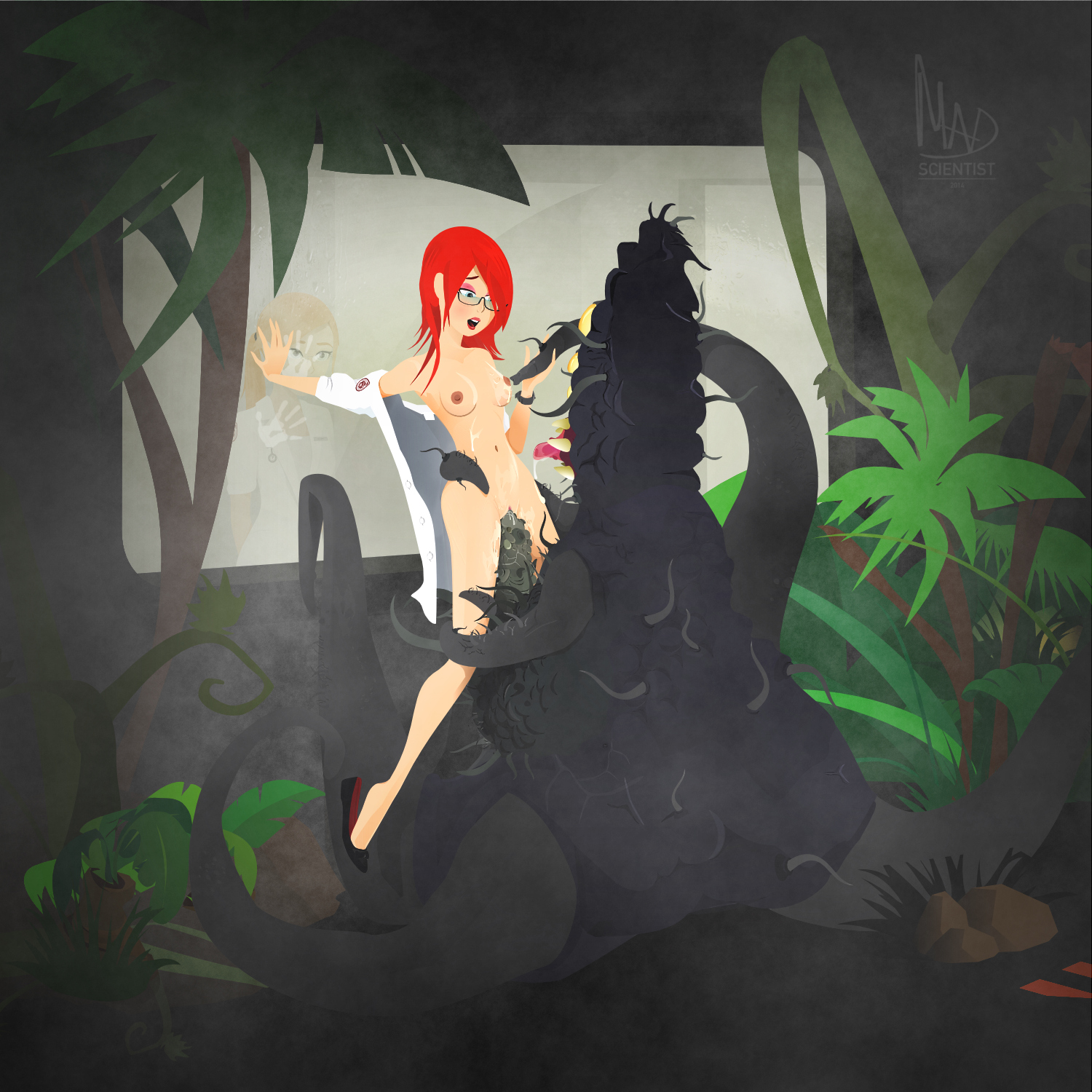 The image appears here by the kind consent of its creator. 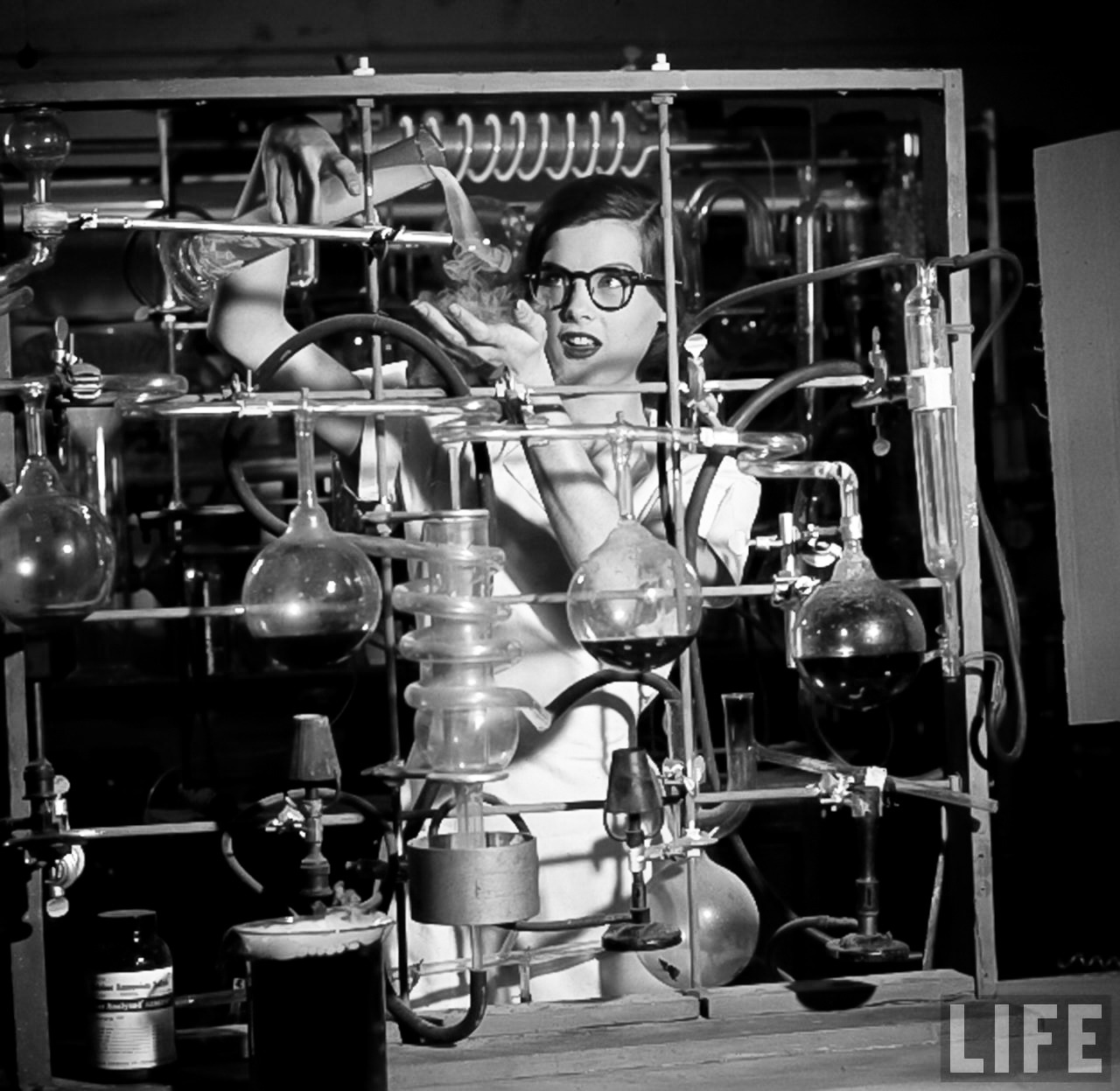 Not the usual (recent) fare for this humble site, but I spotted this picture on my twitter stream (I’m @EroticMadSci for those of you who didn’t already know) and sort of fell in love. It’s captioned “Janet Lee, the MGM girl with mechanical aptitude.” Sadly I’ve been unable to find out much more about her. The picture ran on Cory Doctorow’s twitter @doctorow:

In turn it tracks back to the tumblr inthedarktrees. 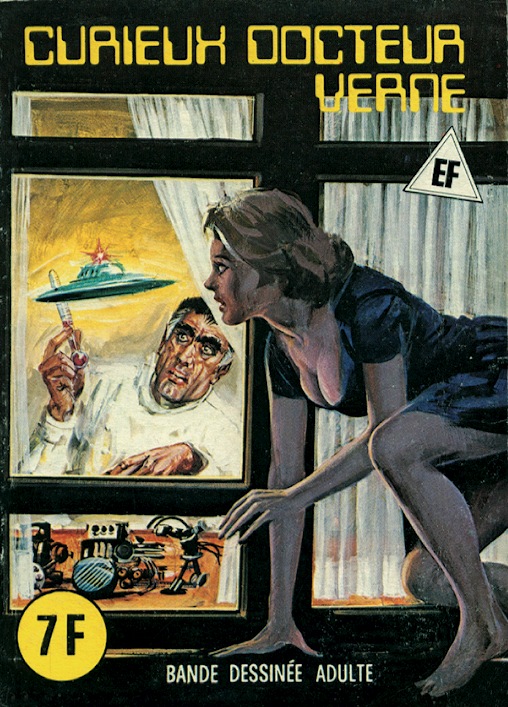 The best way I can make narrative sense out of the combination of the title and the illustration is assume that “Dr. Verre” is not the deformed madman on the other side of the window, but the lady in the dress on the ledge looking in. Good. We could use more women mad scientist protagonists. 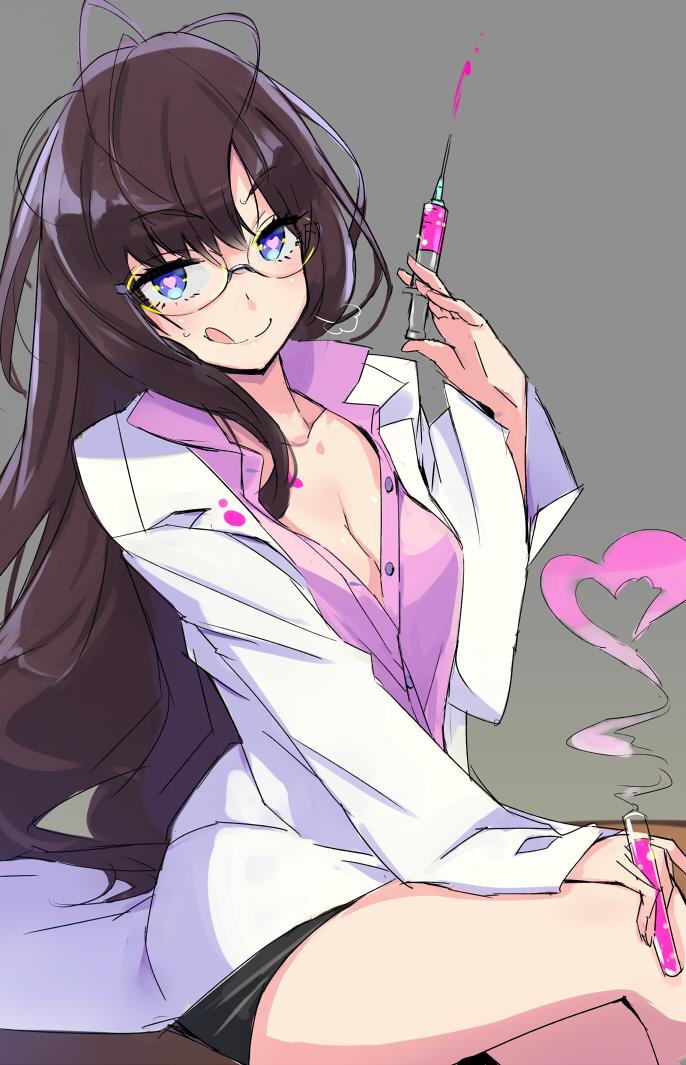 My original tumblr post was here. This image was crossed-posted from twitter by man-nona with the explanatory text “遠出留守@10thお疲れさまさんはTwitterを使っています: “しきにゃんせんせー http://t.co/xGS6cnahny”. (No, I don’t know either.) It comes to us via anniemaysf. 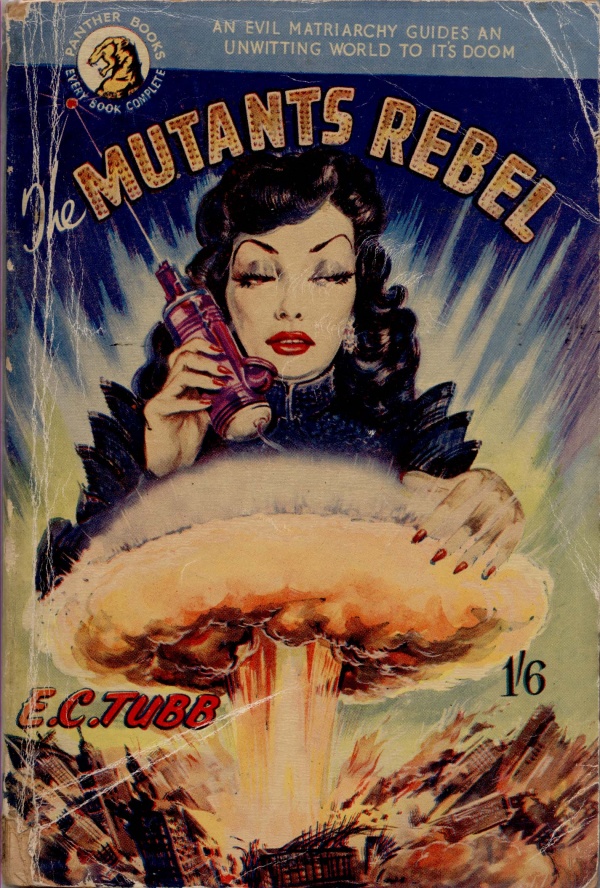 My original tumblr post was here. This image was originally posted on Pulp Covers with the explanatory text “E.C. Tubb, The Mutants Rebel. ‘An evil matriarchy guides an unwitting world to its doom.'” 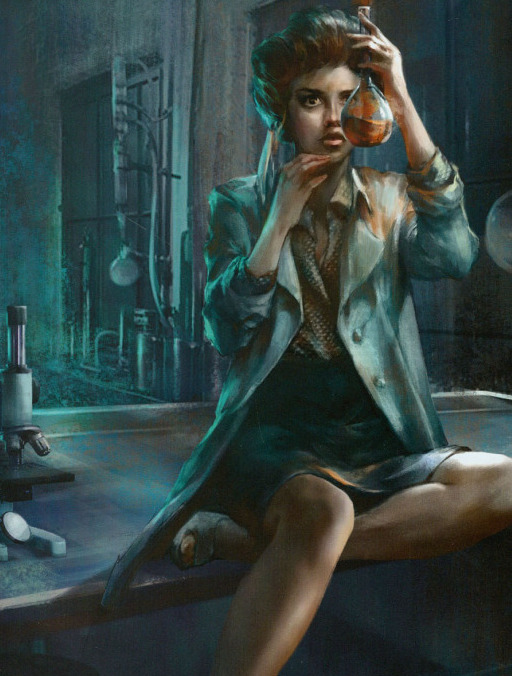 My original tumblr post was here. This image was originally posted on tumblr by Enjoy. It appears to be a crop from a Night of the Living Dead comic published by Doubletake: 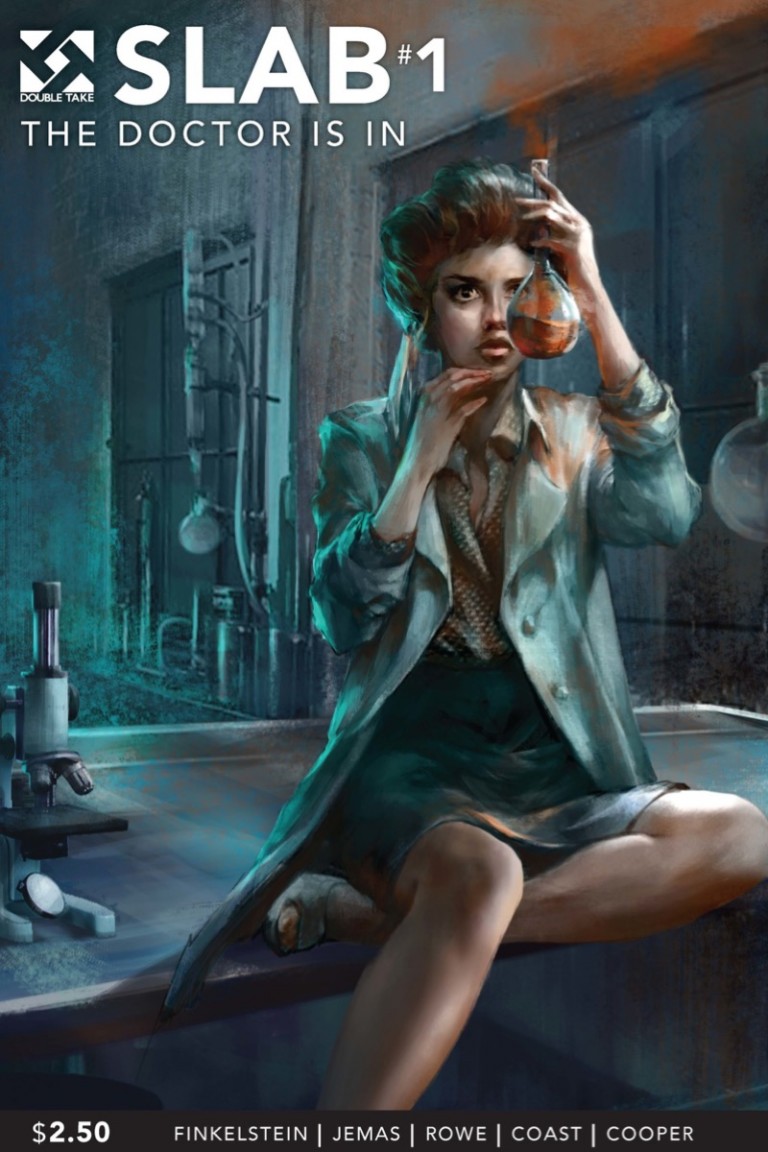 Found at the Doubletake site. 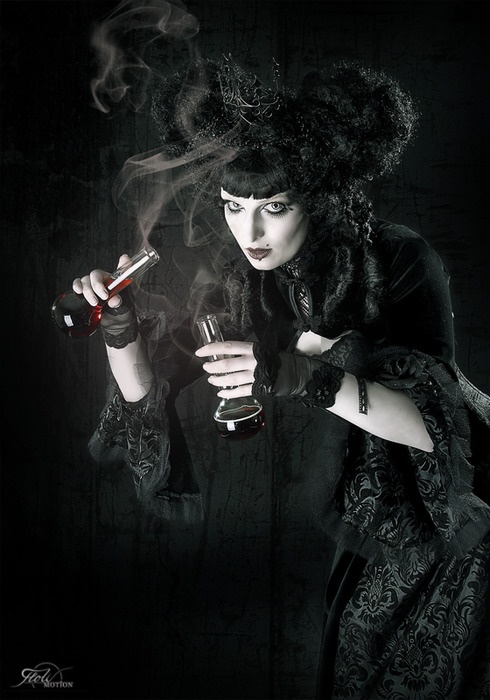 My original tumblr post was here. This image was originally posted by the tumblr Evil Passions together with links to the blog Evil Beauties and the FetishGoth twitter. The image was reblogged by Mad Scientist Appreciation Guild with the comment “It is vital that we encourage more women to get into mad science.” 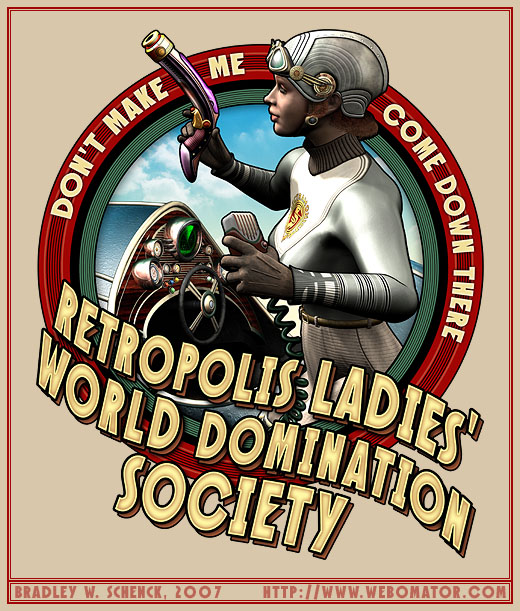 My original tumblr post was here. This is another entry in Bradley W. Schenck’s Ladies World Domination Society series. It was originally posted on tumblr by Map of Tasmania and comes to us via supervillainseekingminions. 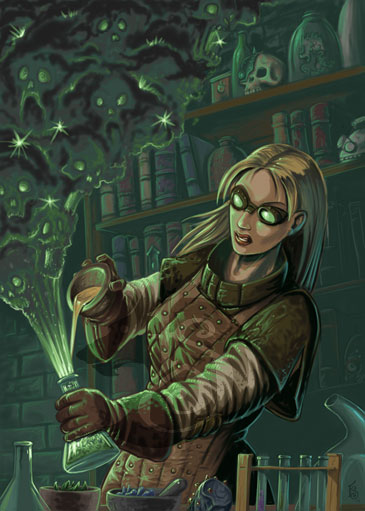 My original tumblr post was here. This illustration is Combat Alchemist at Work by Florian Stitz. It was first posted on tumblr by Minding my Monsters and comes to us via Supervillain Seeking Minions.