Fantastic Adventures published between 1939 and 1953 and rarely stinted on the sexy in its covers, as this cover by Walter Popp (1920-2002) shows, albeit perhaps a bit more subtly than many similar covers in its genre.

This issue of Fantastic Adventures is available to be read or downloaded at the Internet Archive.

Hat tip to Pulp Covers for bringing this issue to my attention.

It’s unfortunate racial tropes ahoy in this interior illustration taken from the February 1937 edition of Dime Mystery Magazine (honestly, I just don’t think we’re any poorer for not having the word “Negress” in common use). A beautiful and helpless woman is up for some procedure. The illustration is (I think) by Monroe Eisenberg (1914-1999). It’s his style, although Amos Sewell also contributed interior art to this issue and his style can be close.

What with all the material in the comics about women becoming (or un-becoming) art it seemed worthwhile to throw in another illustration from that theme:

That’s a nice use of implied nudity, among other things.

The cover was another painting by Tom Lovell, and it certainly suggests dirty work afoot.

This issue of Dime Mystery Magazine is available to be read at or downloaded from the Internet Archive. 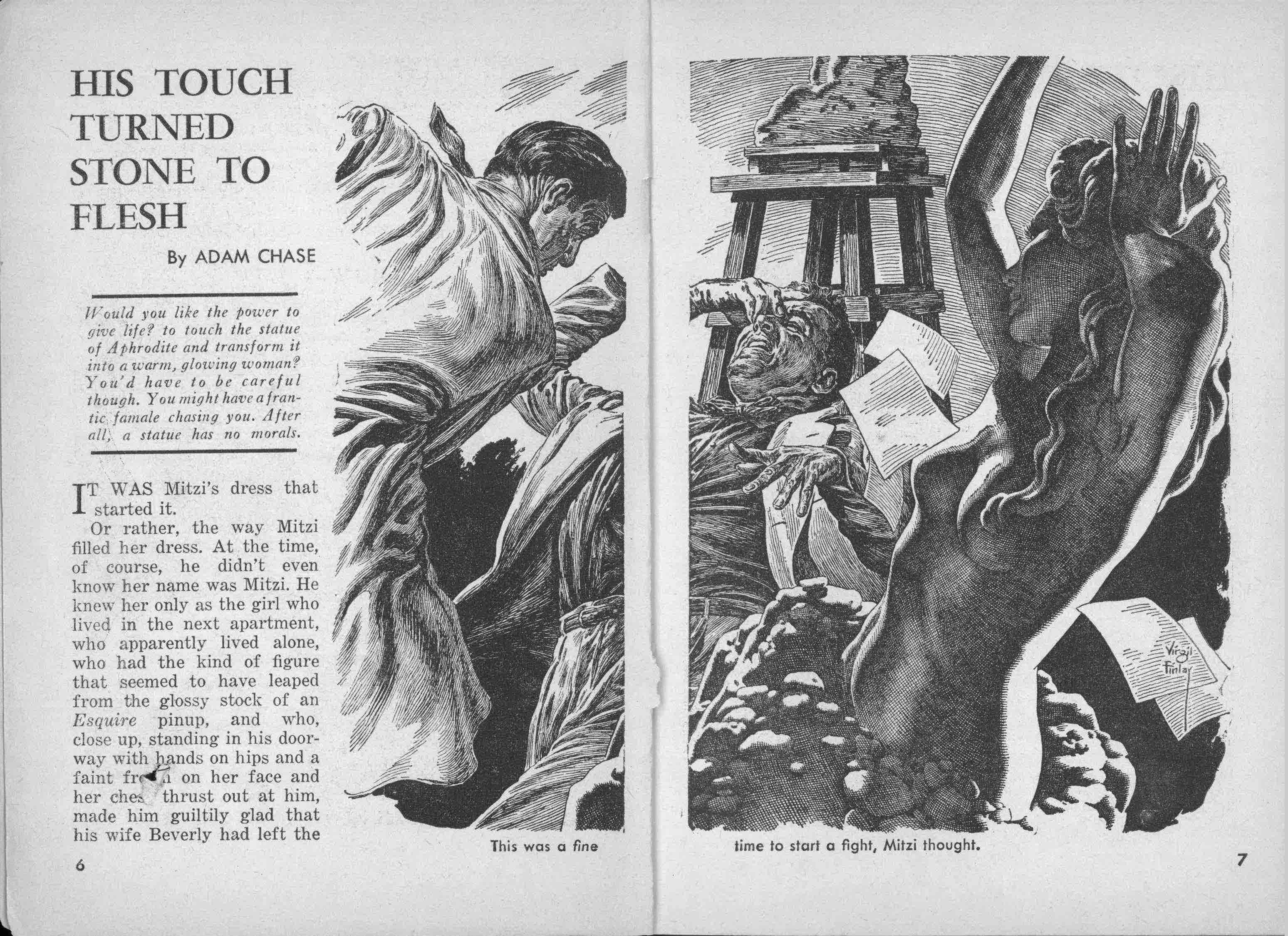 (It’s a big image, so downloading is recommended for the full effect.) The art is by the prolific sci-fi and fantasy artist Virgil Finaly. It’s from Dream World, August 1957.

Dream World had a pretty short life under the editorship of Paul Fairman, apparently running to only three issues. It managed to attract some significant talent. Here’s the cover, by Ed Valigursky: 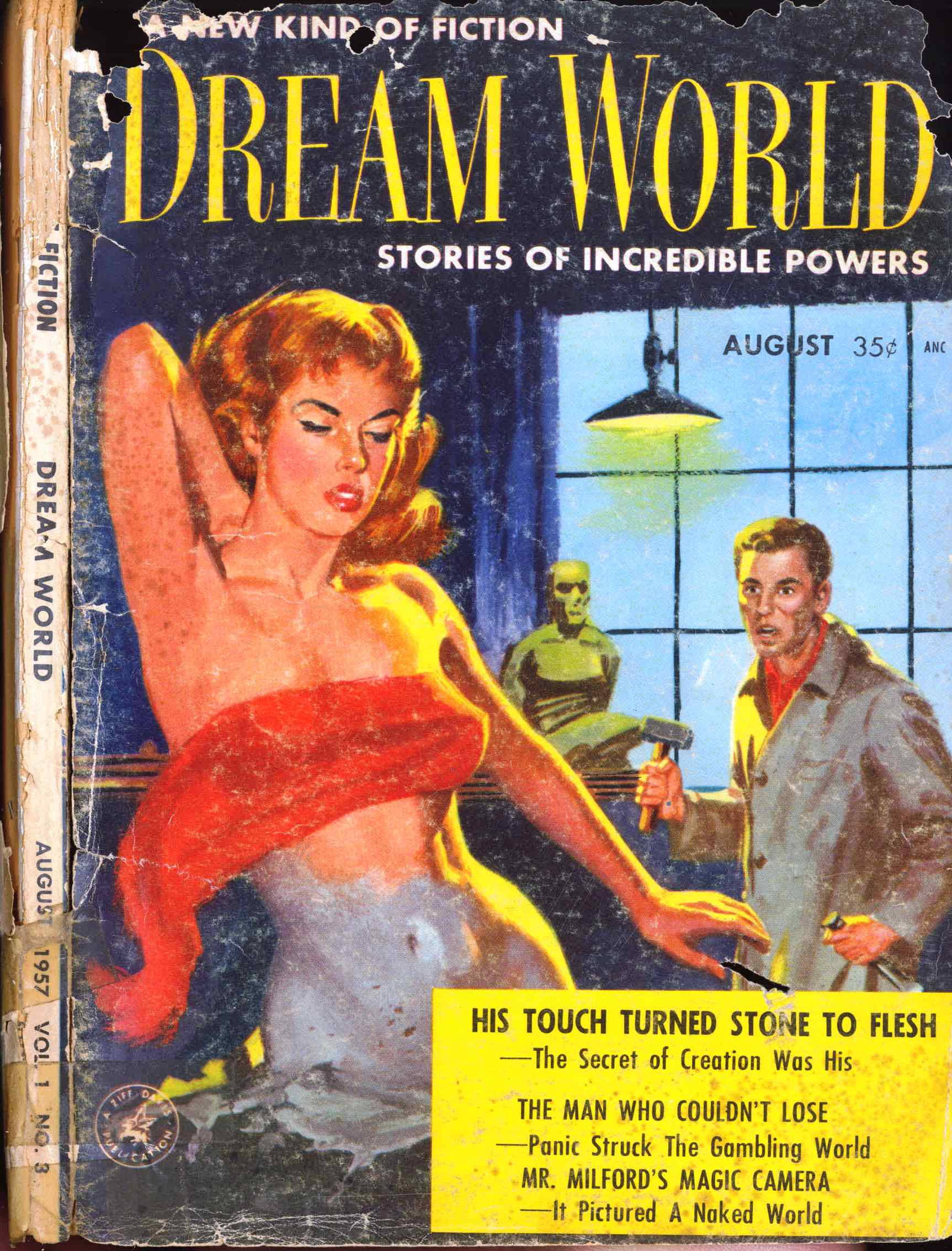 A smaller but cleaner version of the cover can be found via the issue’s ISFDB entry: 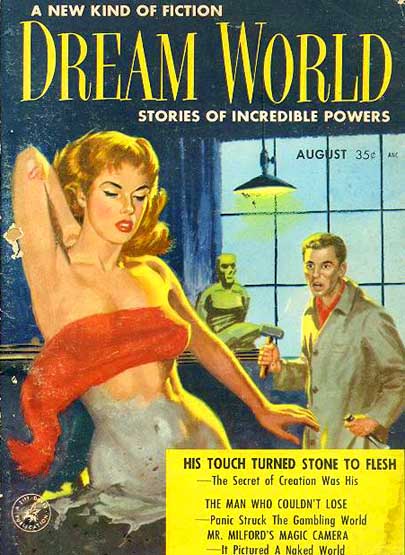 The magazine seems to have attracted real writing talent, as well. The August issue contains stories by Robert Silverberg and Harlan Ellison. You can read or download it from the Internet Archive.

Just a bit more Harold McCauley pulp illustration. Boy are we going to be sorry when oxygen tanks gain sentience. 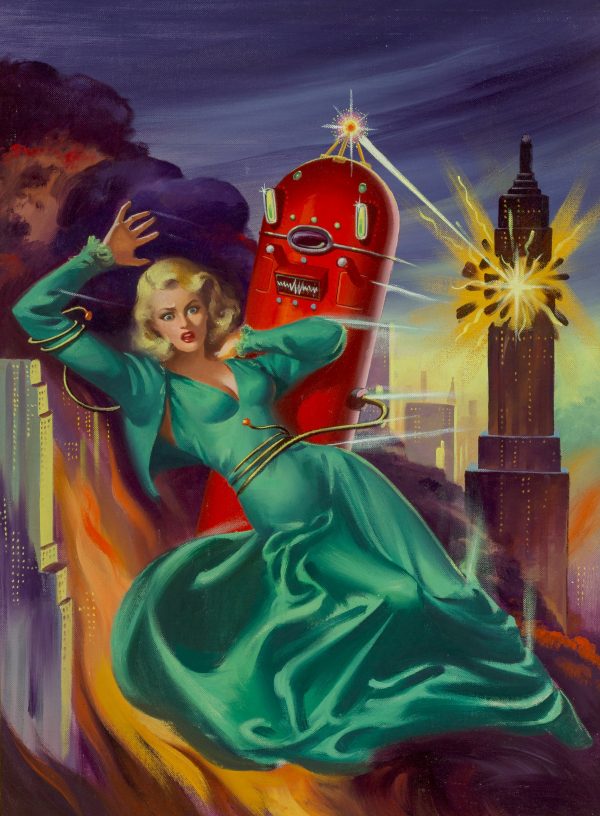 This painting graced the cover of the January 1956 issue of Imaginative Tales. 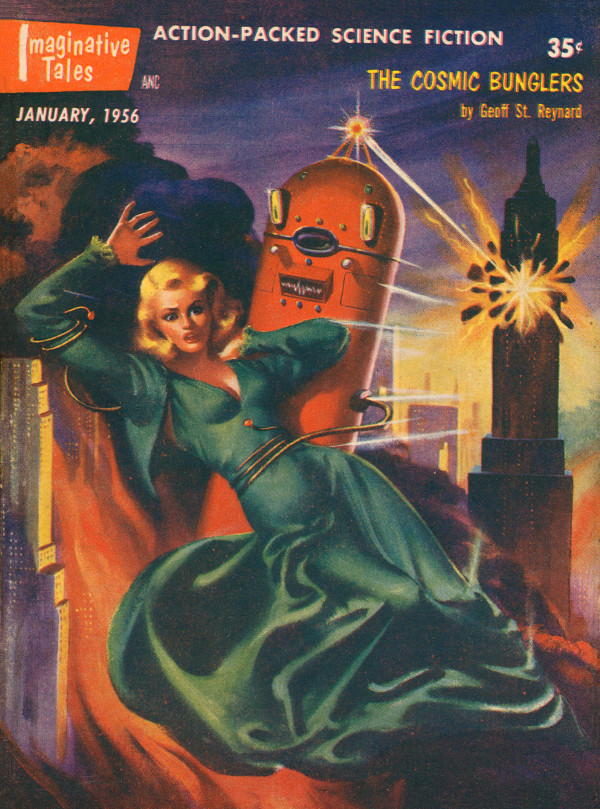 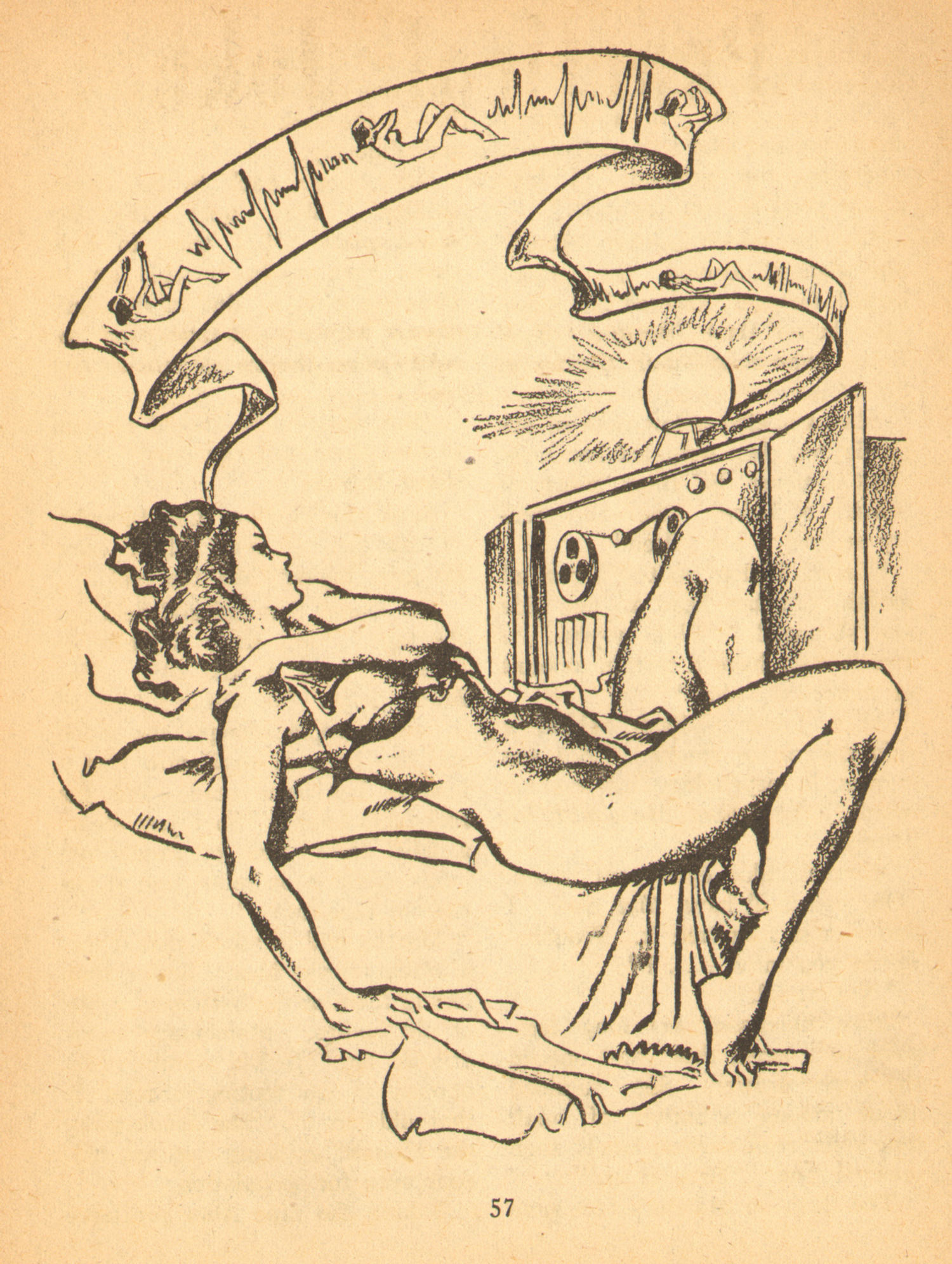 It illustrates a story by Richard O. Lewis, “Practical Joke.” The promo copy:

Hypnotapes were a proven boon to industry, where difficult problems could be experienced and solved vicariously. But to marriage — sheer chaos!

Well all righty then! 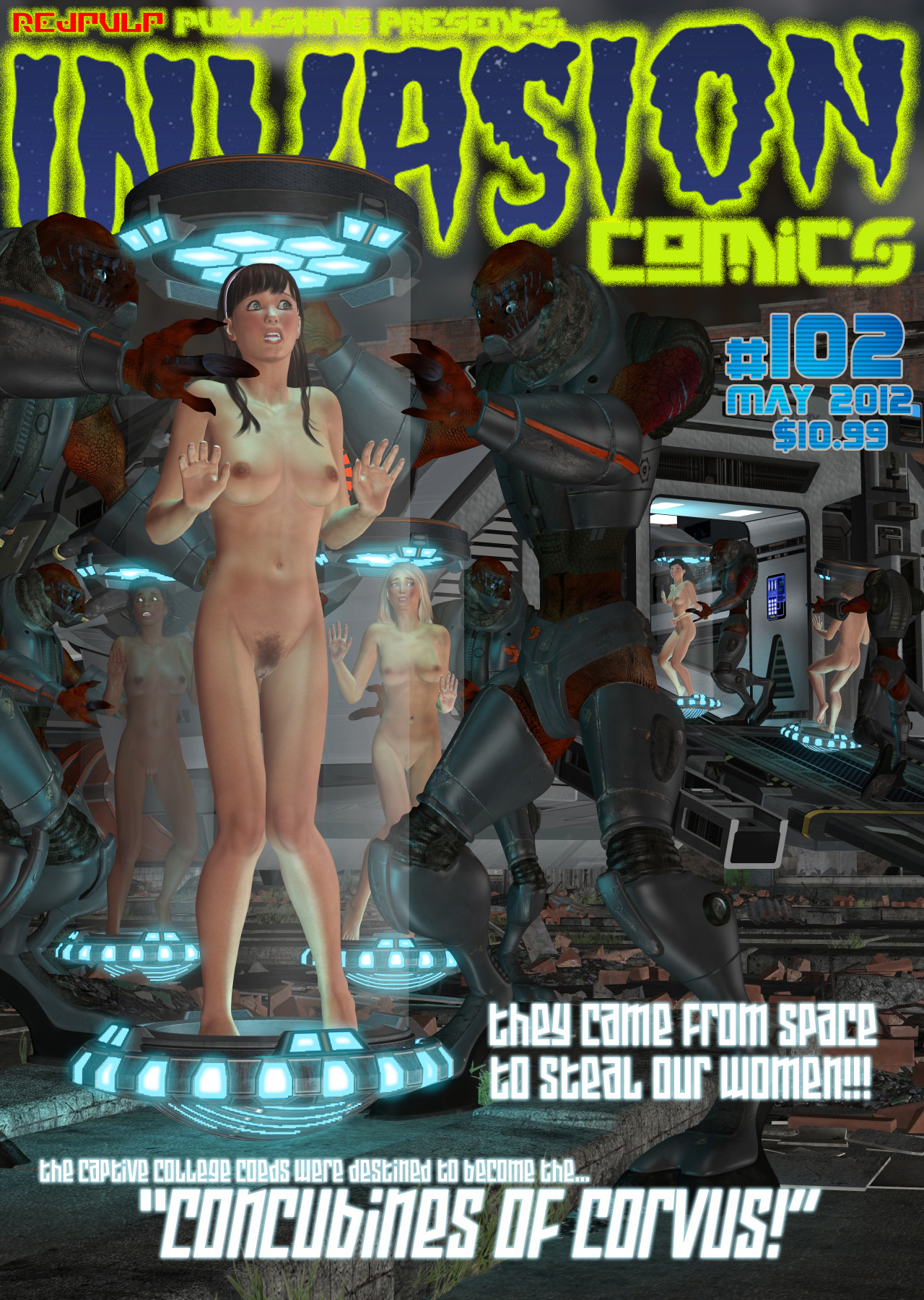 This illustration is the work of Redpulp (a DeviantArt user ID). Please do not copy, reproduce, or alter it without its creator’s permission.

The Aliens found a particularly fertile encampment of humans in what was called a “Uni-versity” before the bombardment. After subduing any resistance, the females are placed into sterile canisters for transport to the alien breeding centers…

And just recently, a return to theme: 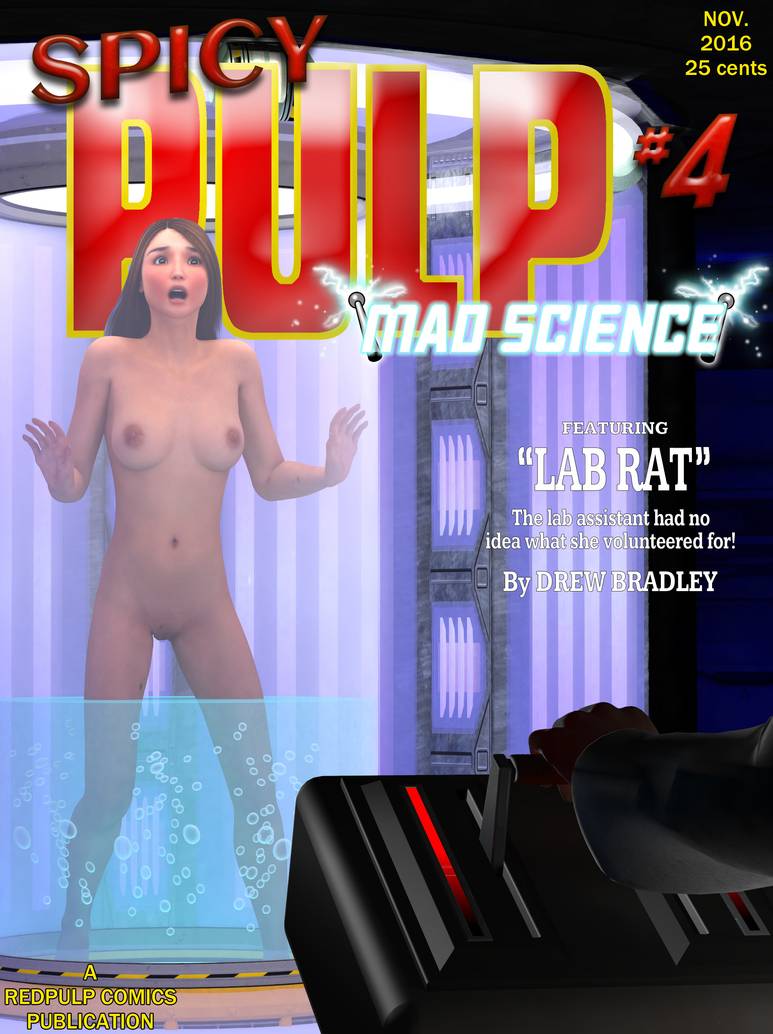 This illustration is the work of Redpulp (a DeviantArt user ID). Please do not copy, reproduce, or alter it without its creator’s permission.

Monique had only volunteered to be his Lab Assistant to bring up her abysmal grade. As it turns out – skipping 3 lectures and blowing the final WASN’T the way to pass an advanced science class, who knew?

Now she was paying the price, Summer had just started! Her friends were all partying on a beach in Miami while she was stuck here listening to her Professor drone on about whatever boring-ass science crap he was excited about. She took another sip of the bizarre Tea concoction he had given her, maybe the caffeine would keep her awake as he chattered on. Strangely though – it seemed to be having the opposite effect…

When she woke next, Monique found her circumstances much more INTERESTING…

Word to the wise: if a mad scientist offers you tea and you’re the sort who can ignore whether your space-costume makes sense or not, don’t accept it,, unless you really up for something, uh, “interesting.” Like intimate involvement the production of Monique-flavored seltzer, or whatever else is going on here.

You can and should visit Redpulp’s DeviantArt site. Long may he illustrate!

It has been a while since I’ve run any classic pulp on this site, and as we’re on a brief break between two comics features now might be a good time for some. Over to Imagination for July 1954. 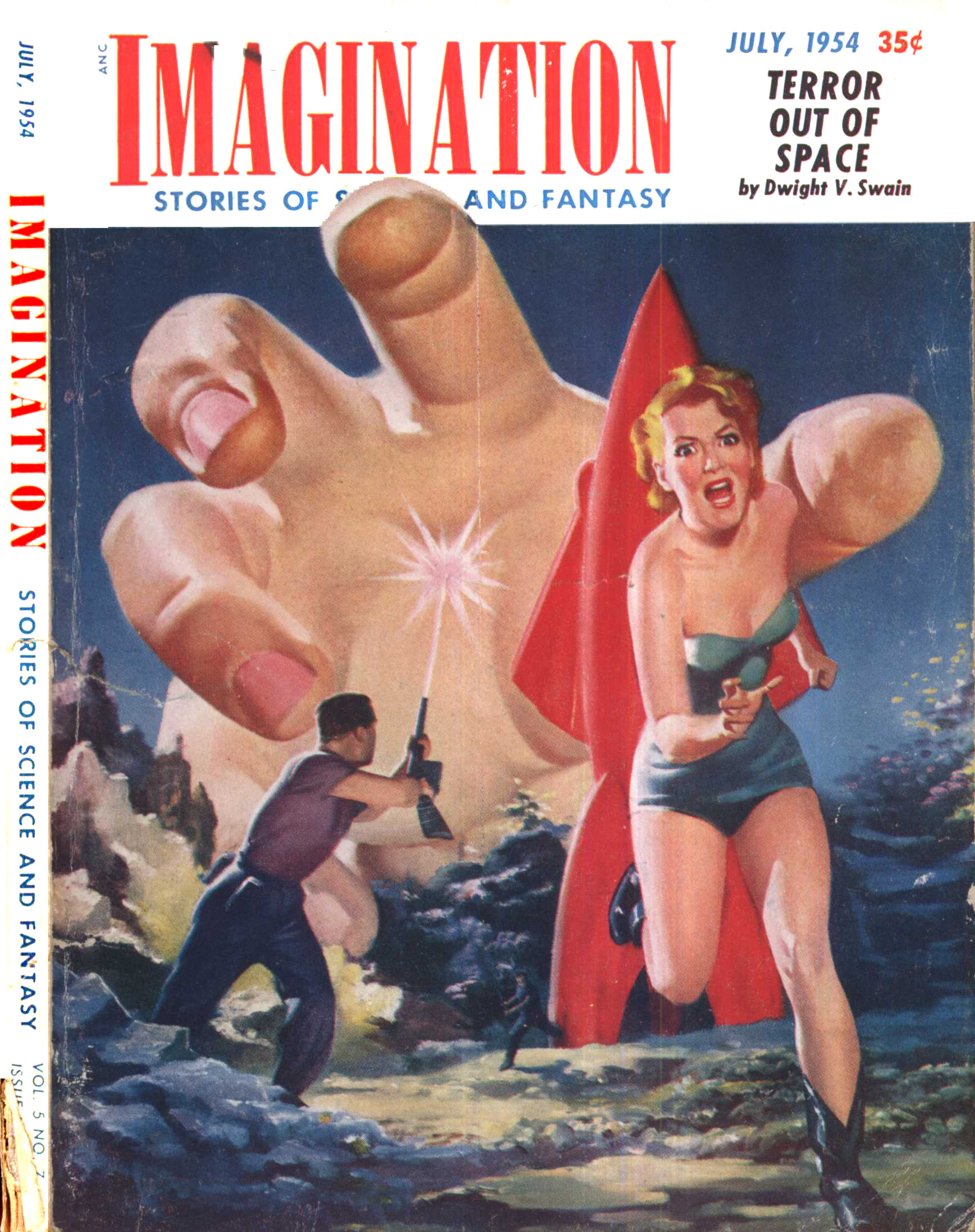 That’s pretty fantastic cover art by Harold McCauley (1913-1977), complete with rocket and ray-gun tropes. Why the red-headed woman is exploring an alien planet in a bathing suit is perhaps best explained only by Faustus’s Law: If you’re pretty enough it doesn’t matter if your space costume makes any sense. Running the hell away from the giant hand at least seems like a sensible course of action. 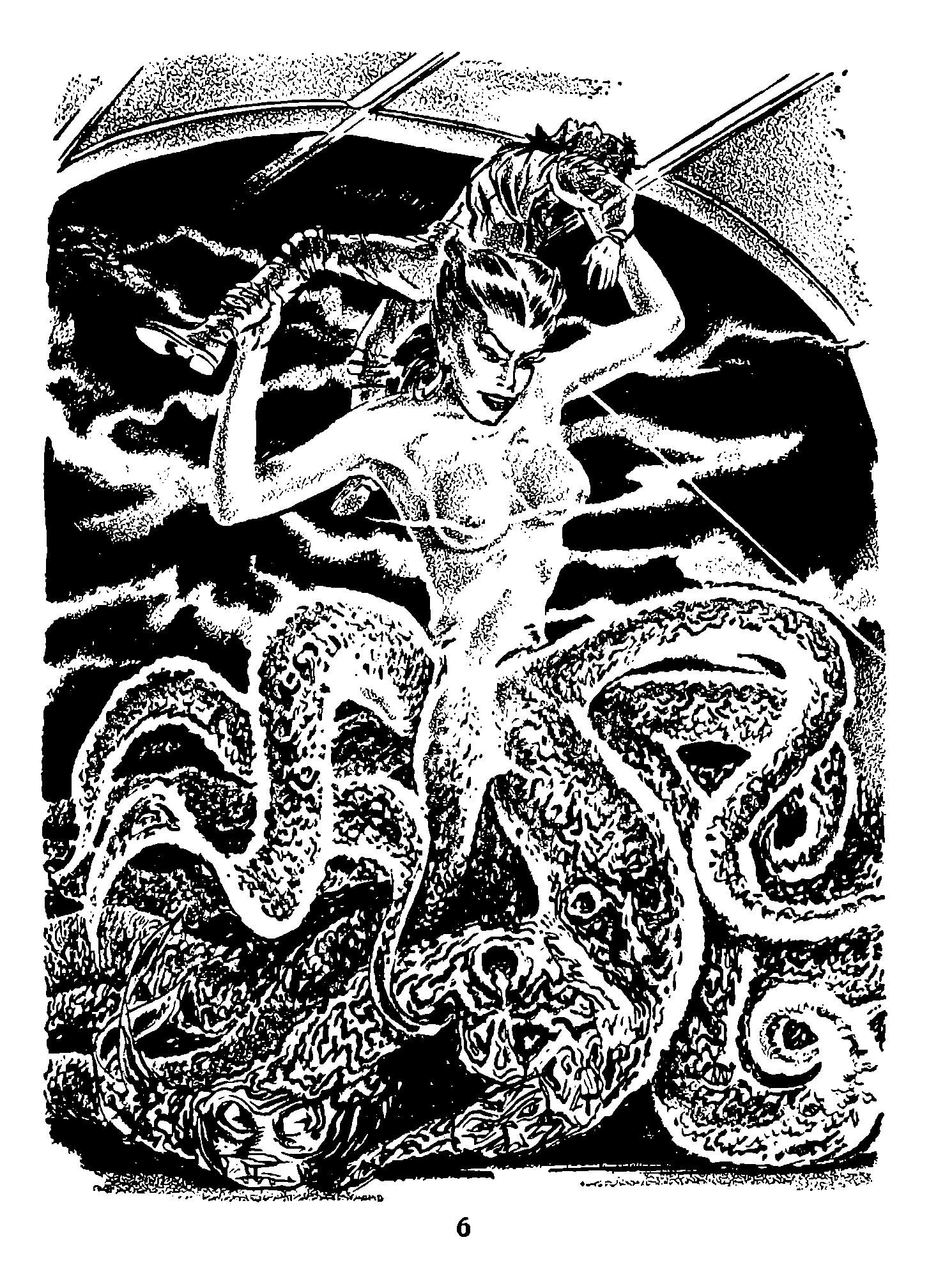 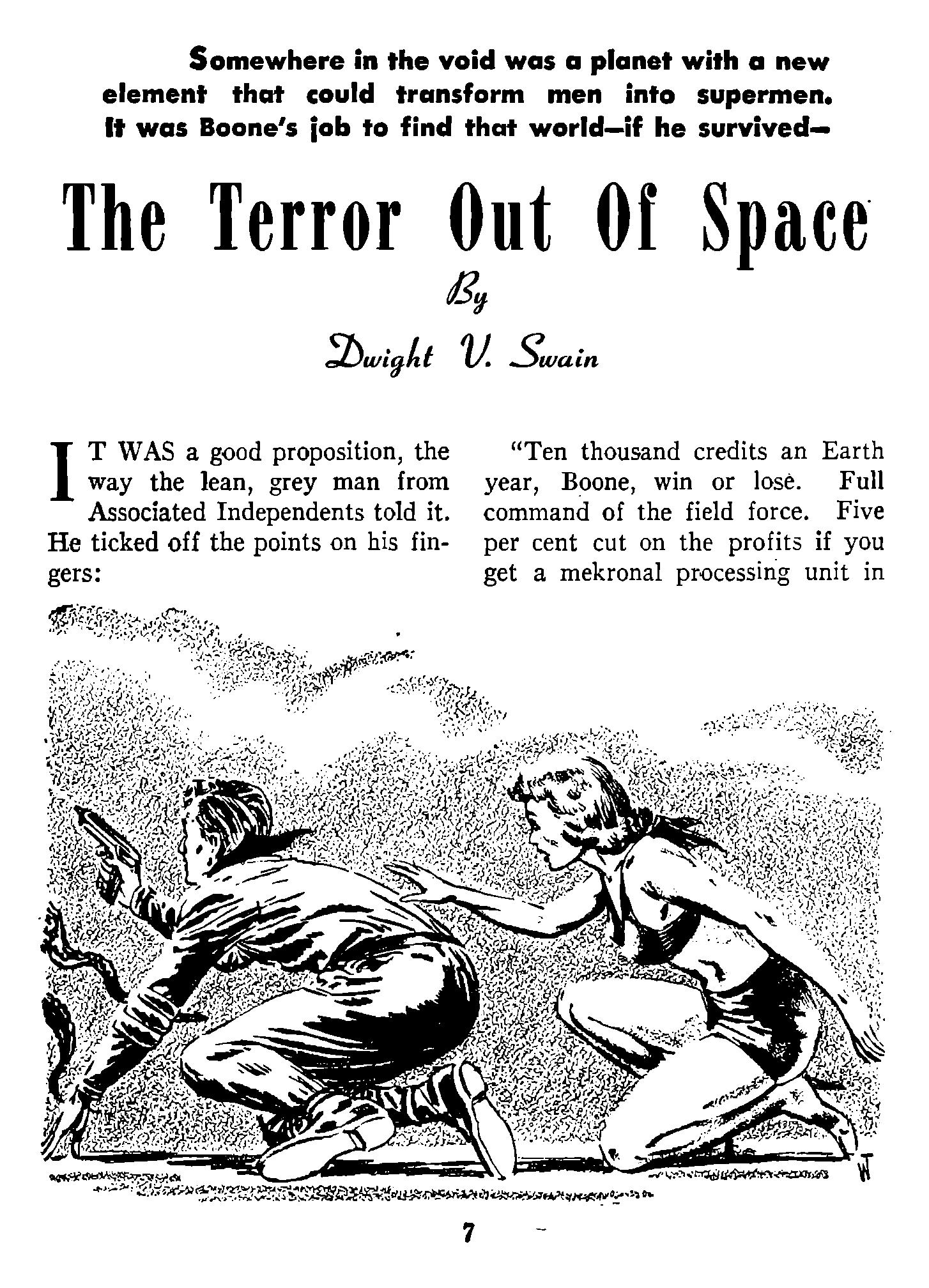 A giant topless space space octopus-woman, tentacles and all. Fuck yeah! I bet your puny ray-gun will be no match for her, capitalist space-tool!

And again with the spacewoman in a bathing suit. Maybe it’s some kind of union rule.

This issue of Imagination is available to be read and downloaded at the Internet Archive. 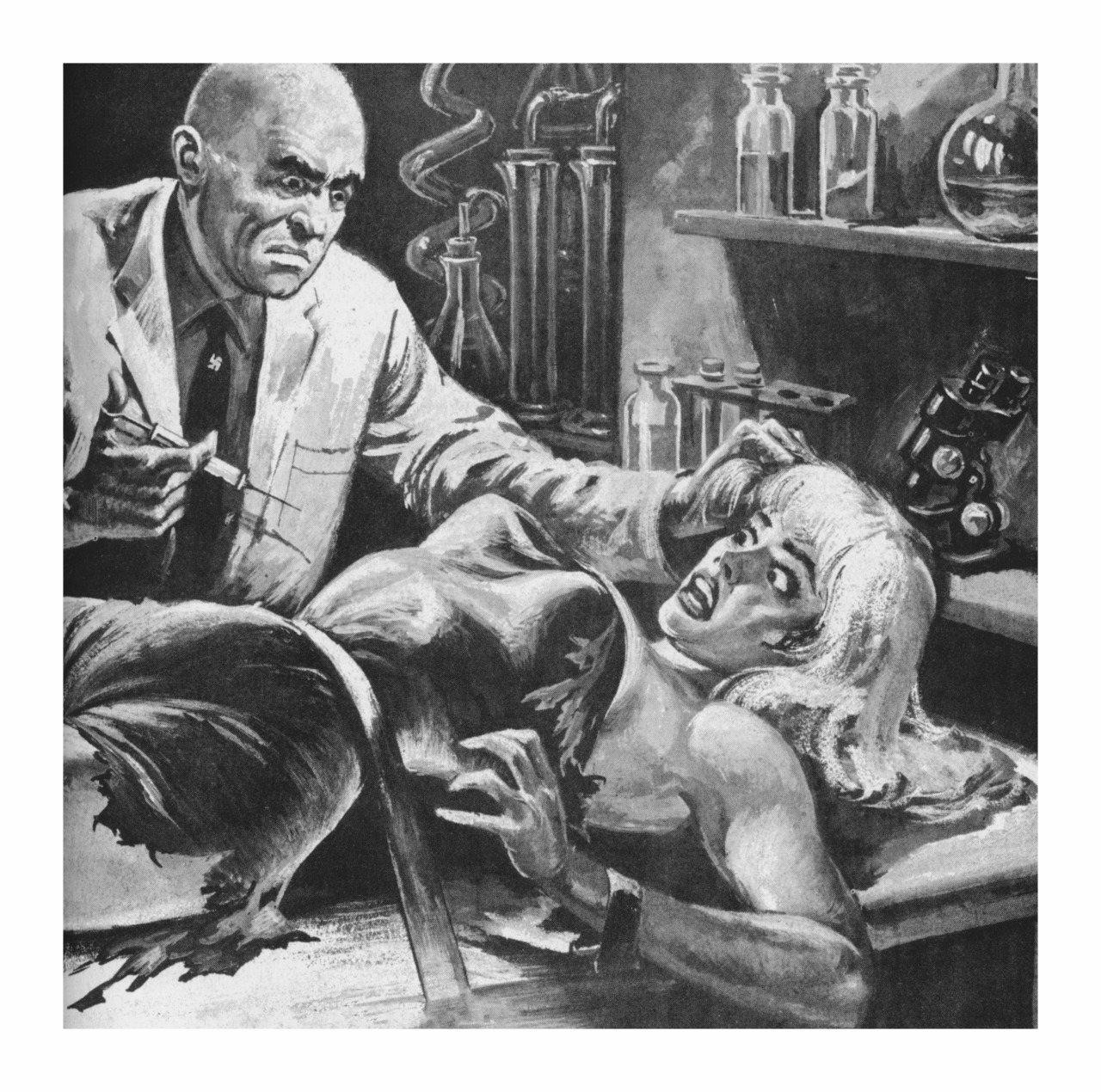 I don’t have a provenance on this image, but it has a 1960s’s men’s adventure magazine look to me, and seems likely to have accompanied a Nazisploitation story. (Or, possibly, its close comrade in fiction, the Commiesploitation story.) Reblogged from this 10 April 2016 post at Infernal Wonders. 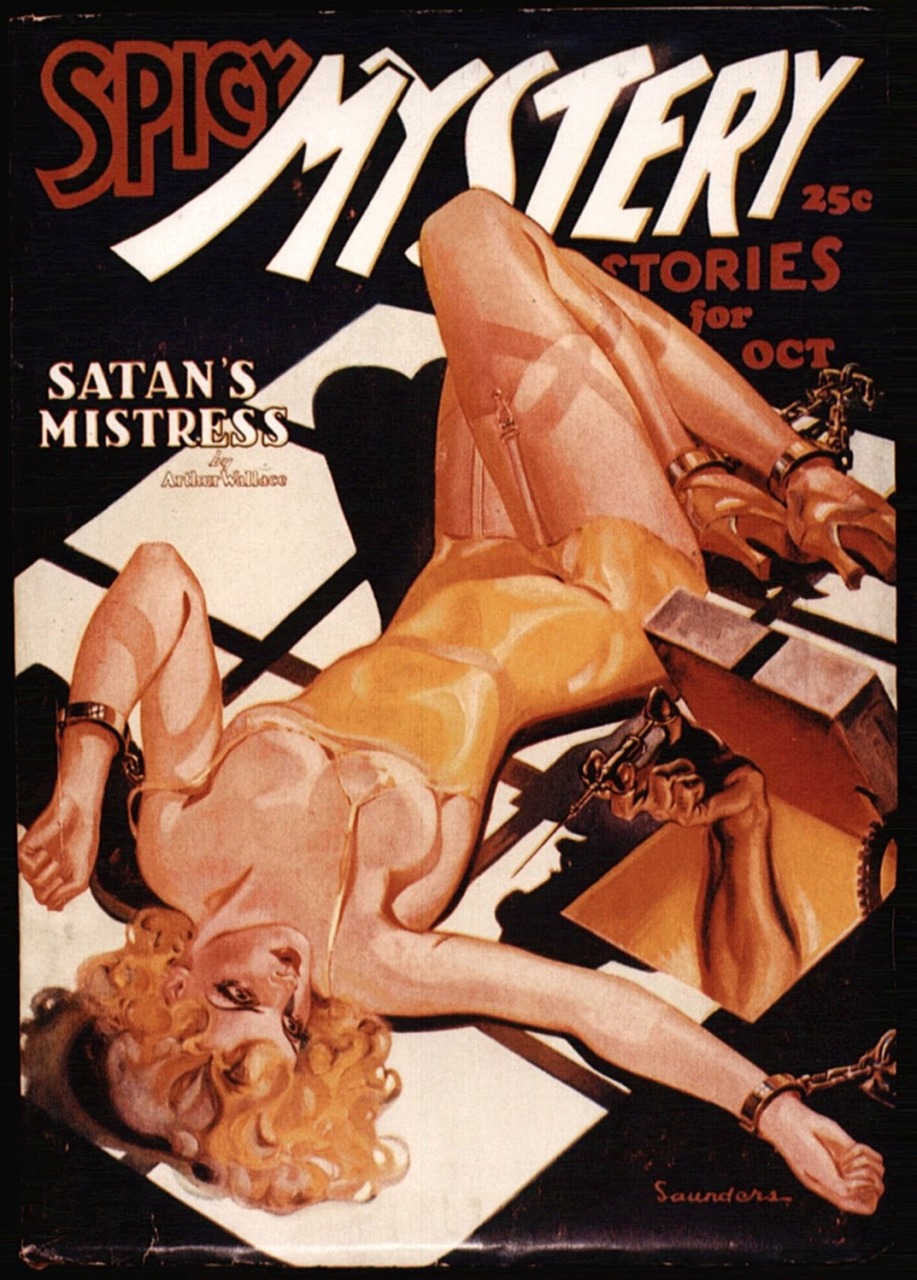 This classic pulp cover by Norman Saunders is on the October 1935 issue of Spicy Mystery Stories (ISFDB entry here). It is reblogged from this 28 March 2016 post at Infernal Wonders. 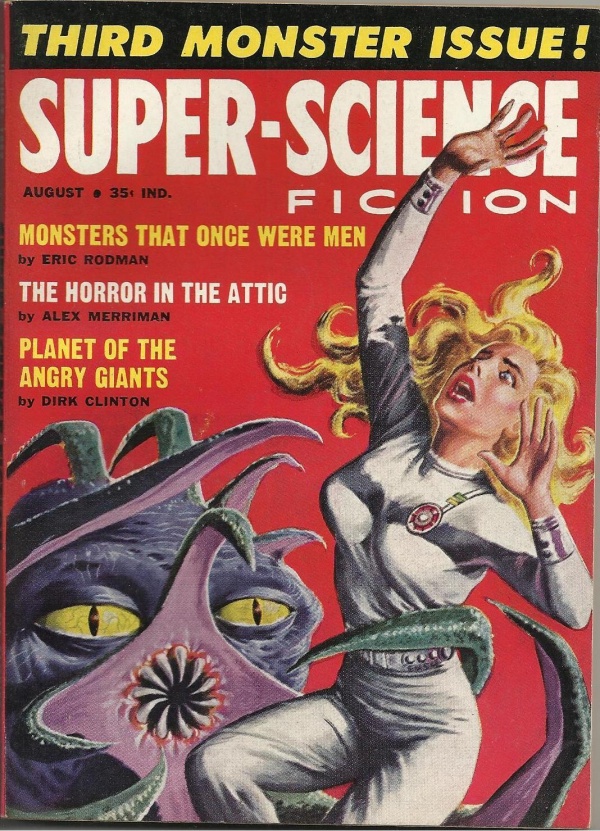 However else they might have changed, the monsters that once were men are still like men in at least one important respect. This is the cover of the August 1959 edition of Super Science Fiction, which I am reblogging from this 6 March 2016 post at Infernal Wonders, and which came into the tumblr ecosystem via this Pulp Covers post.

If you’re so inclined you can read and download this magazine at the Internet Archive. And let’s not forget that the Archive is a magnificent free Internet resource supported by user donations: please donate to them if you can. 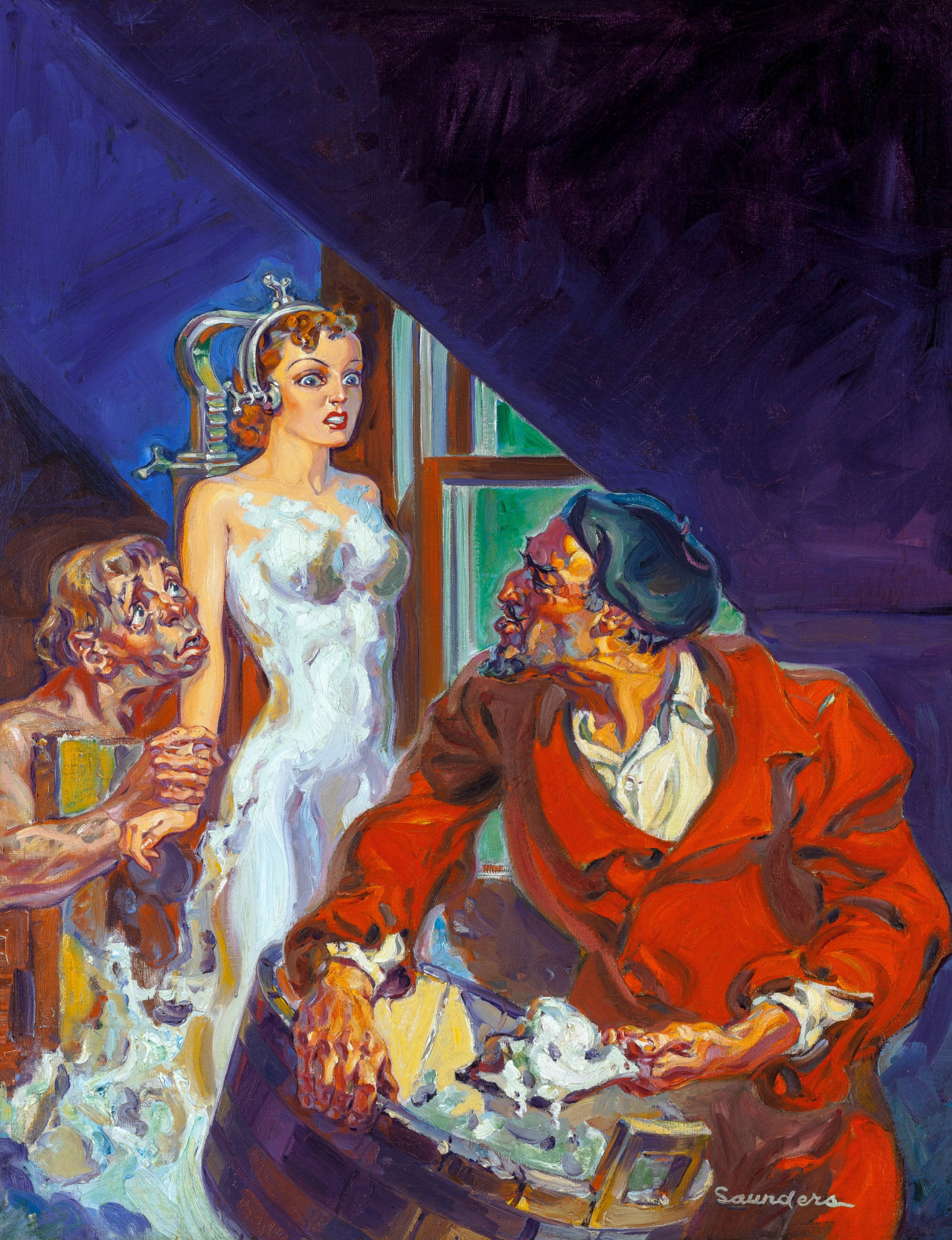 This very pulpy image is by the one of the masters of the trade, Norman Saunders. It is reblogged from this 26 November 2015 post at Infernal Wonders.