Having the subject sealed inside some sort of giant tube is also very much part of the mad science protocols. 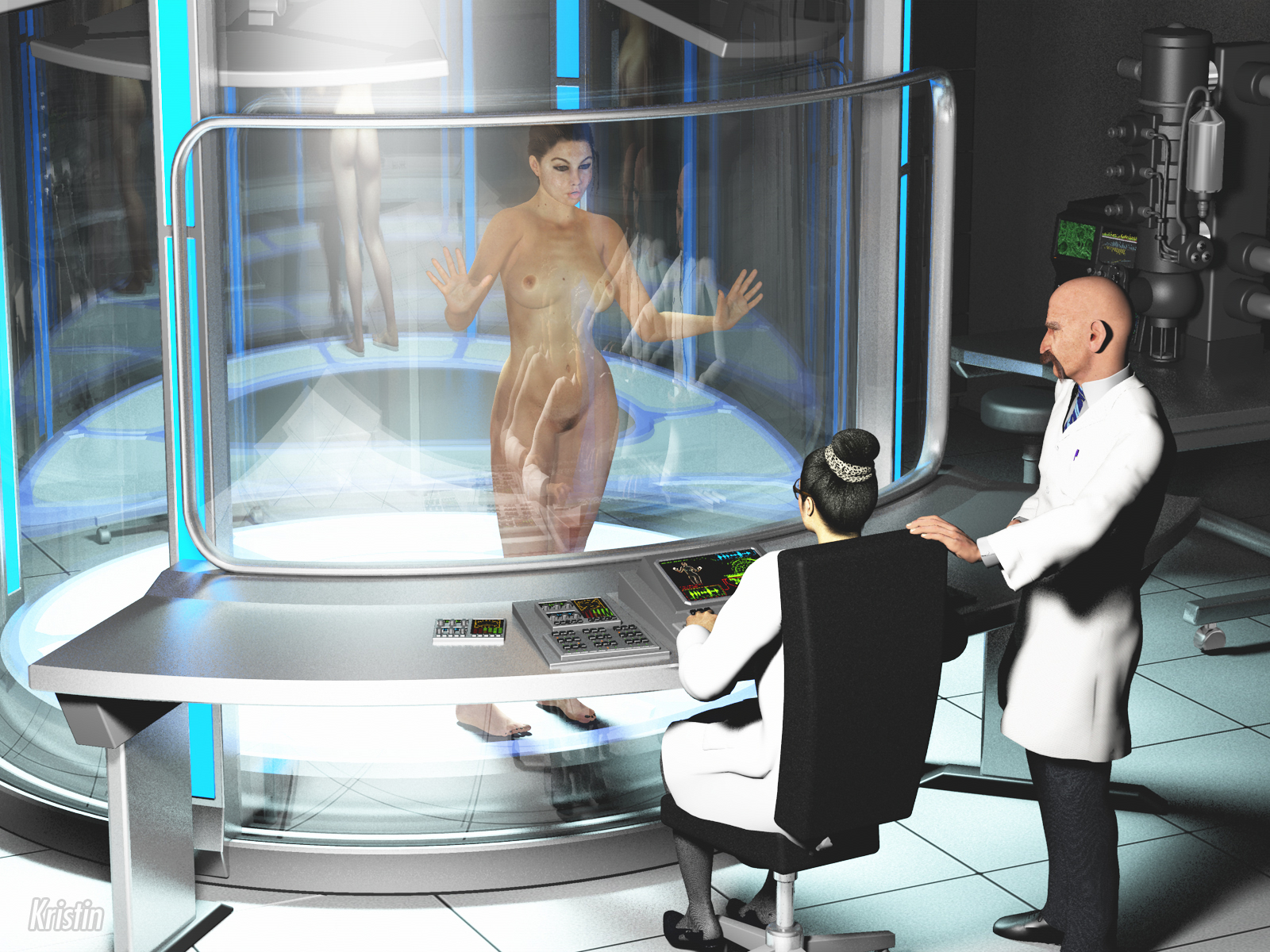 Goo Girl Genesis #3 written and commissioned by Dr. Faustus of EroticMadScience.com and illustrated by KristinF is published under a Creative Commons Attribution-NonCommercial-NoDerivs 3.0 Unported License.)

Like so many well-designed mad science experiments, this one requires that its subject be naked. Good thing that Lucy is only a little shy about this. 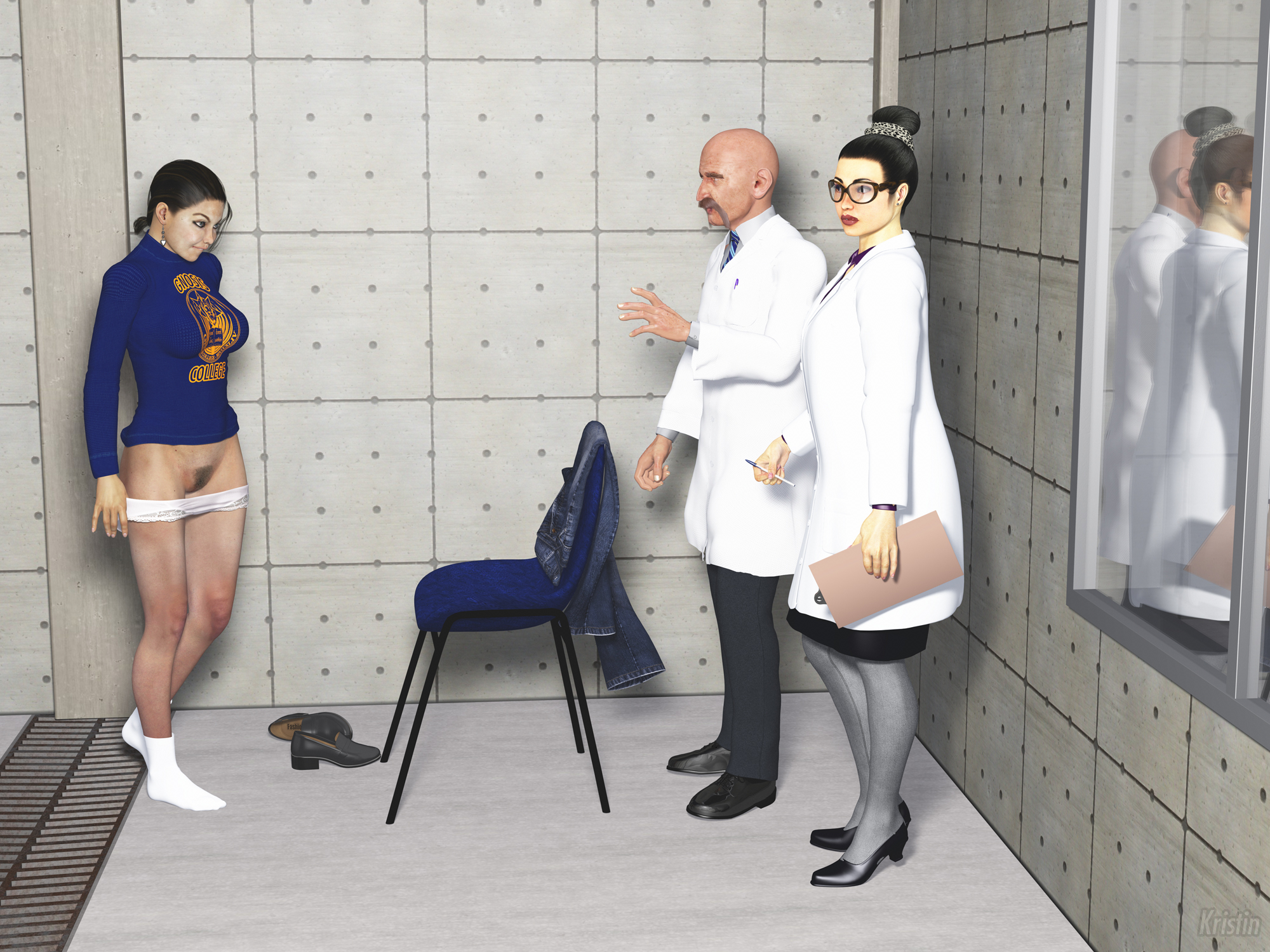 Goo Girl Genesis #2 written and commissioned by Dr. Faustus of EroticMadScience.com and illustrated by KristinF is published under a Creative Commons Attribution-NonCommercial-NoDerivs 3.0 Unported License.)

In between Study Abroad and Progress in Research I have a brief story sequence, here done by daring and talented CG artist KristinF.

A Gnosis College coed (“Lucy” in the script) arrives at the laboratory of a scientist (“Dr. Urulchek”) where she has volunteered to participate as a subject in an experiment. She’s watched in the background by Dr. Urulchek’s assistant, Bettina. 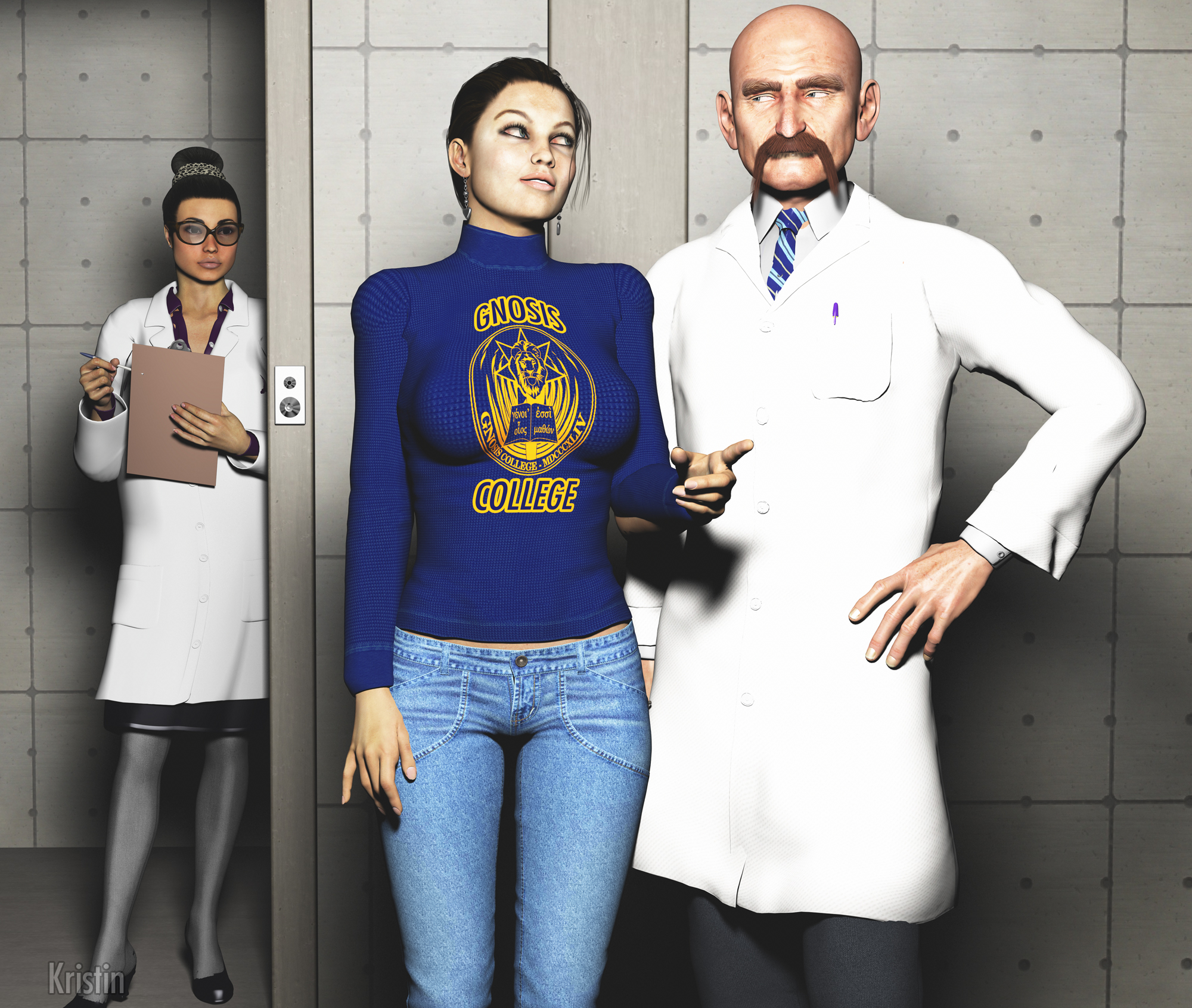 Goo Girl Genesis #1 written and commissioned by Dr. Faustus of EroticMadScience.com and illustrated by KristinF is published under a Creative Commons Attribution-NonCommercial-NoDerivs 3.0 Unported License.)

Kristin was commissioned to go wild.  She did. 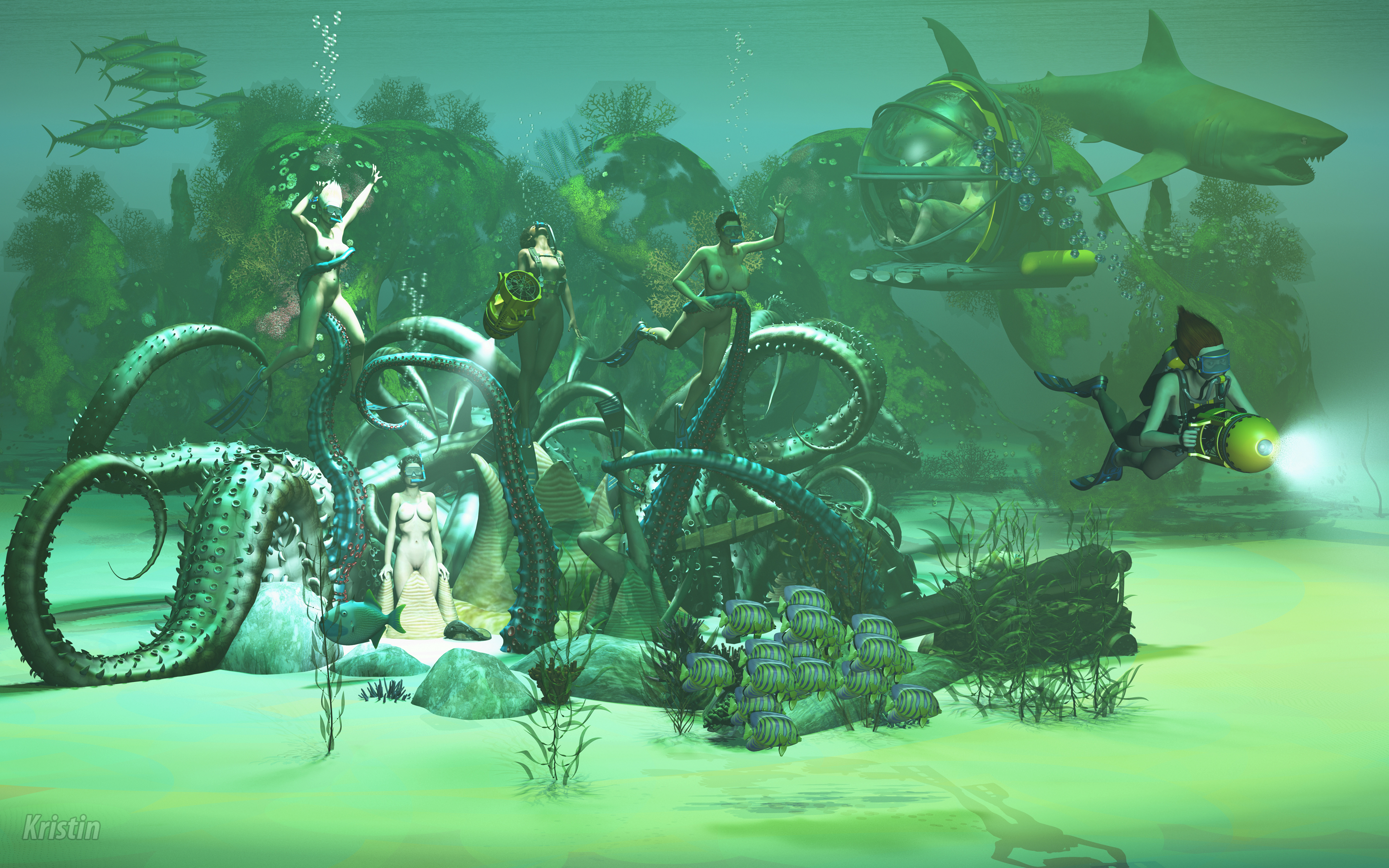 Tentacle Fantasia by KristinF and commissioned by Dr. Faustus of EroticMadScience.com is licensed under a Creative Commons Attribution-NonCommercial-NoDerivs 3.0 Unported License.)

The image reproduced in blog size cannot possibly do justice to the amount of fetishy detail that Kristin has worked in here, so by all means please click though to see the large image. It looks like an underwater expedition gone horribly wrong. Or horribly right. It depends on your perspective. I must note, however, that the fearsome shark in the upper-right hand part of the illustration has come to his own conclusion and appears to be fleeing the whole happening in terror.

KristinF has worked up a doozy of a bespoke art set-piece from a bit of comics script I was once working on, coming up with a gritty, scary, sexy, dieselpunk environment in which something very mad science is taking place. 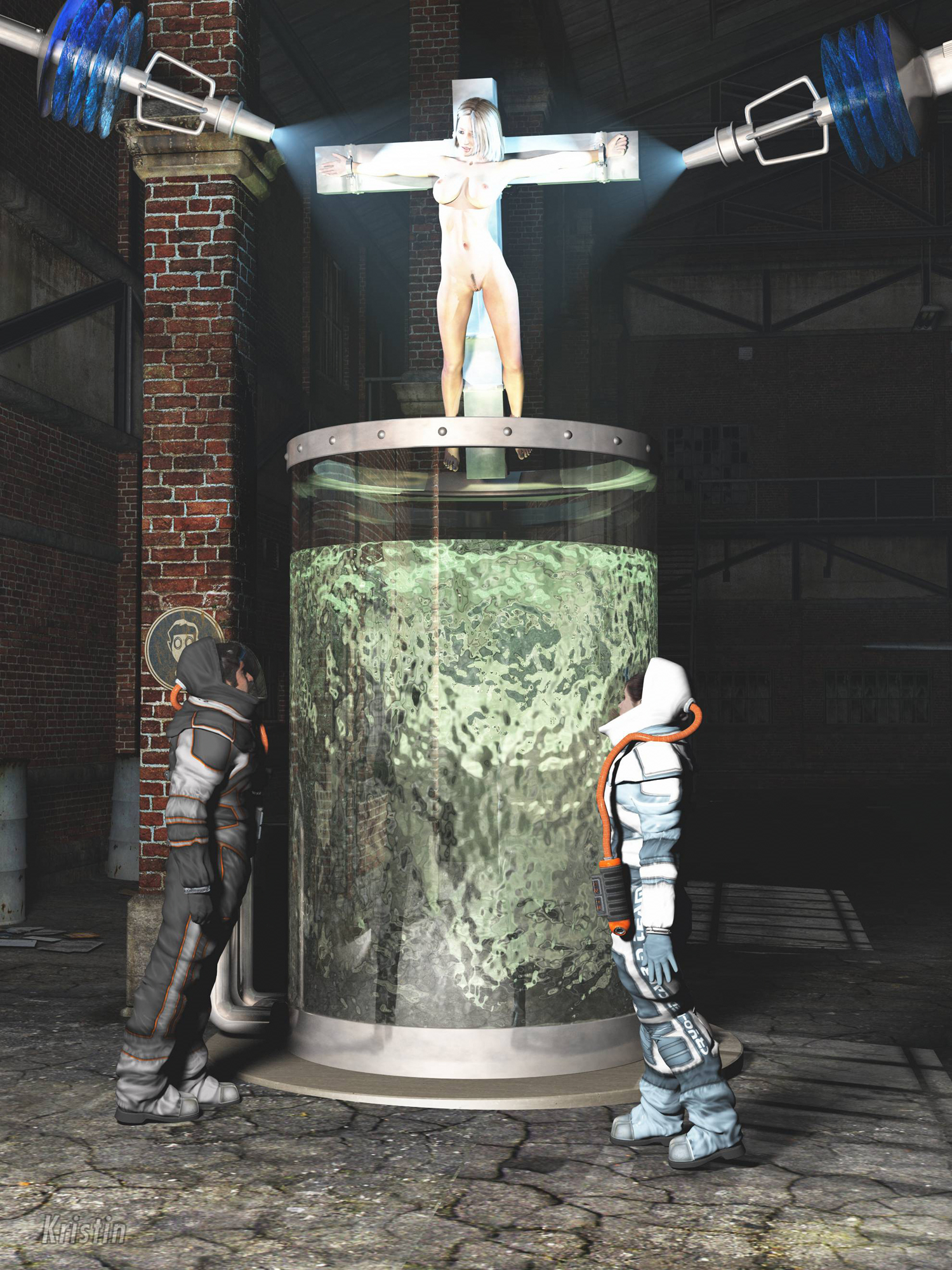 Edith Sterling’s Transformation Begins by KristinF and commissioned by Dr. Faustus of EroticMadScience.com is licensed under a Creative Commons Attribution-NonCommercial-NoDerivs 3.0 Unported License.)

The script is Teuthology and the basic story is that Edith Sterling an assistant professor of inveterate biology at Gnosis College, summoned by the government to help clean up after a mad-science experiment disrupted by the authorities, has agreed to undergo a version of the experiment in hopes of being able to reverse its effects on the mad scientist’s previous victims.  She’s naked because she needs to soak up a lot of special radiation that will effect her transformation from woman to octopus (note the receiving tank of fluid beneath her).  And she’s crucified because…well, that’s the way the mad scientist did his other victims, and you don’t want to tamper with mad science procedures more than you have to!

Edith is being watched here by a naval officer and his chief scientist, neither of whom appears to have had the courage to show up naked for the proceedings.  Perhaps unsurprisingly, Edith in the script takes a pretty dim view of being on display here.

View up Edith, ¾ behind, upper half. We can see her head slumped down.

View of Edith’s bare midsection. Two “ray-gun” like objects are in the frame, pointing at her. (SFX: WHRRR)

Caption (3): It wasn’t even obvious that this part of the ordeal was necessary. It might just have been sadism on Dr. Sin’s part. But I don’t want to deviate unnecessarily from…

View of Shackleford and Chen. They are both wearing radiation suits and dark goggles.

Shackleford (5):  Everything all right, Professor Sterling?

Close-up on Edith’s face.  She is showing an expression of grim determination.

Caption (6):  He isn’t here out of scientific interest. Or out of compassion for me.

We can but sympathize.  (It should be noted, though, that Edith is actually looking forward to becoming an octopus, even if no one else in the story knows this.)  Though perhaps if Edith had read this rather remarkable blog entry and picked up the right fetish, she might have had a different hedonic take on the mad-science proceedings…

The penalty for voluntary frolics is…forced copulation. In an elaborate dungeon sex machine, at that. Don’t ask me what insane troll logic got the nuns there. It’s not my religion.

I will note that the Mother Superior has a most unusual approach to manipulating the controls on the machine.

At least Willie will get out of this and head back to Gnosis. Rayna has a somewhat more complicated fate in store… 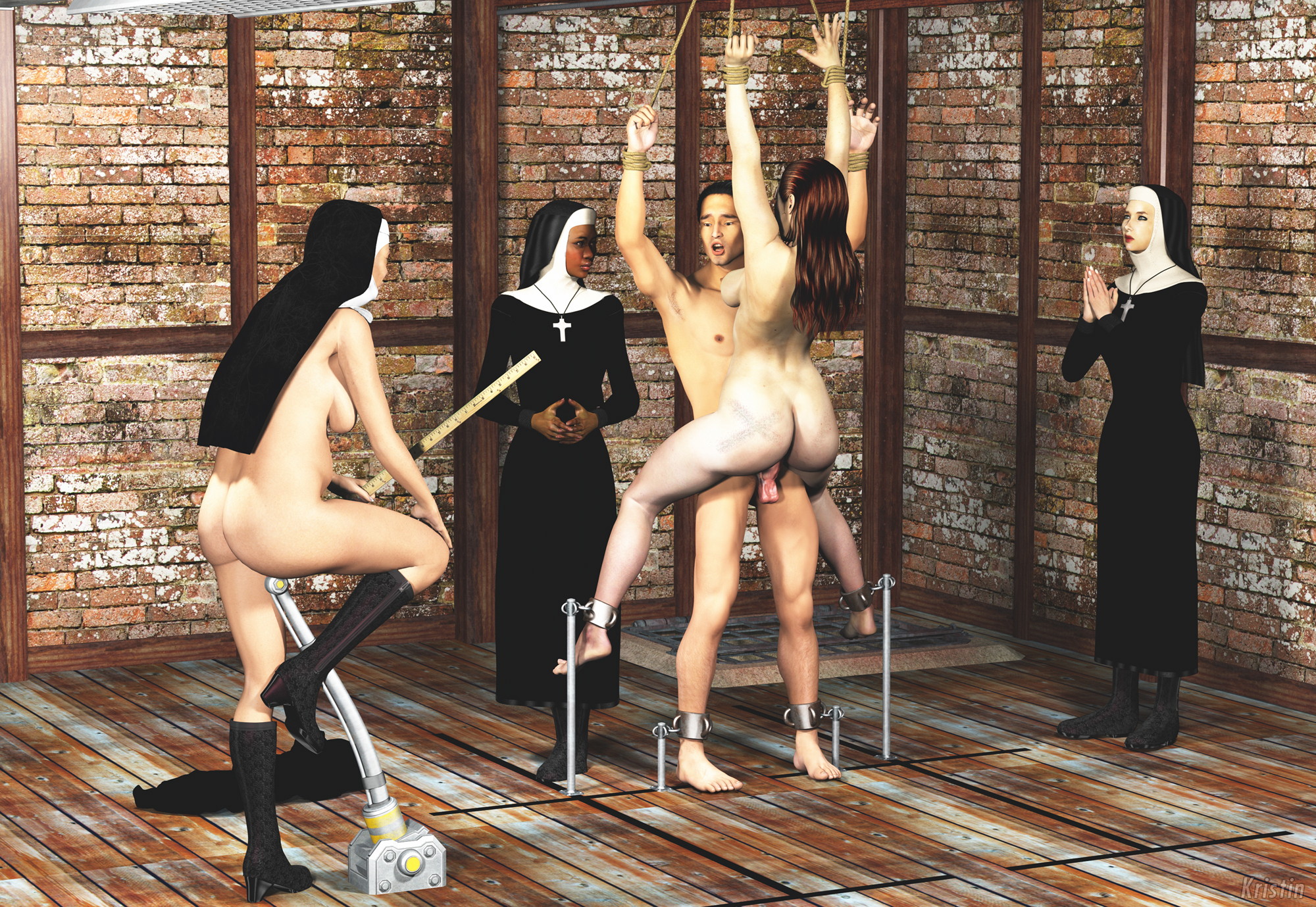 Willie & Rayna Dungeon Sequence IV by KristinF and commissioned by Dr. Faustus of EroticMadScience.com is licensed under a Creative Commons Attribution-NonCommercial-NoDerivs 3.0 Unported License.)

The good sisters of Mary Magdalene, showing their familiarity with the grand tradition of European pornography, maintain a dungeon in the basement precisely for the purpose of dealing with miscreants like Willie and Rayna. The unlucky (?) pair are being teased and taunted, and doubtless unfavorable remarks are being made about Willie’s willie.

You didn’t think the big ruler was just for smacking people, did you? 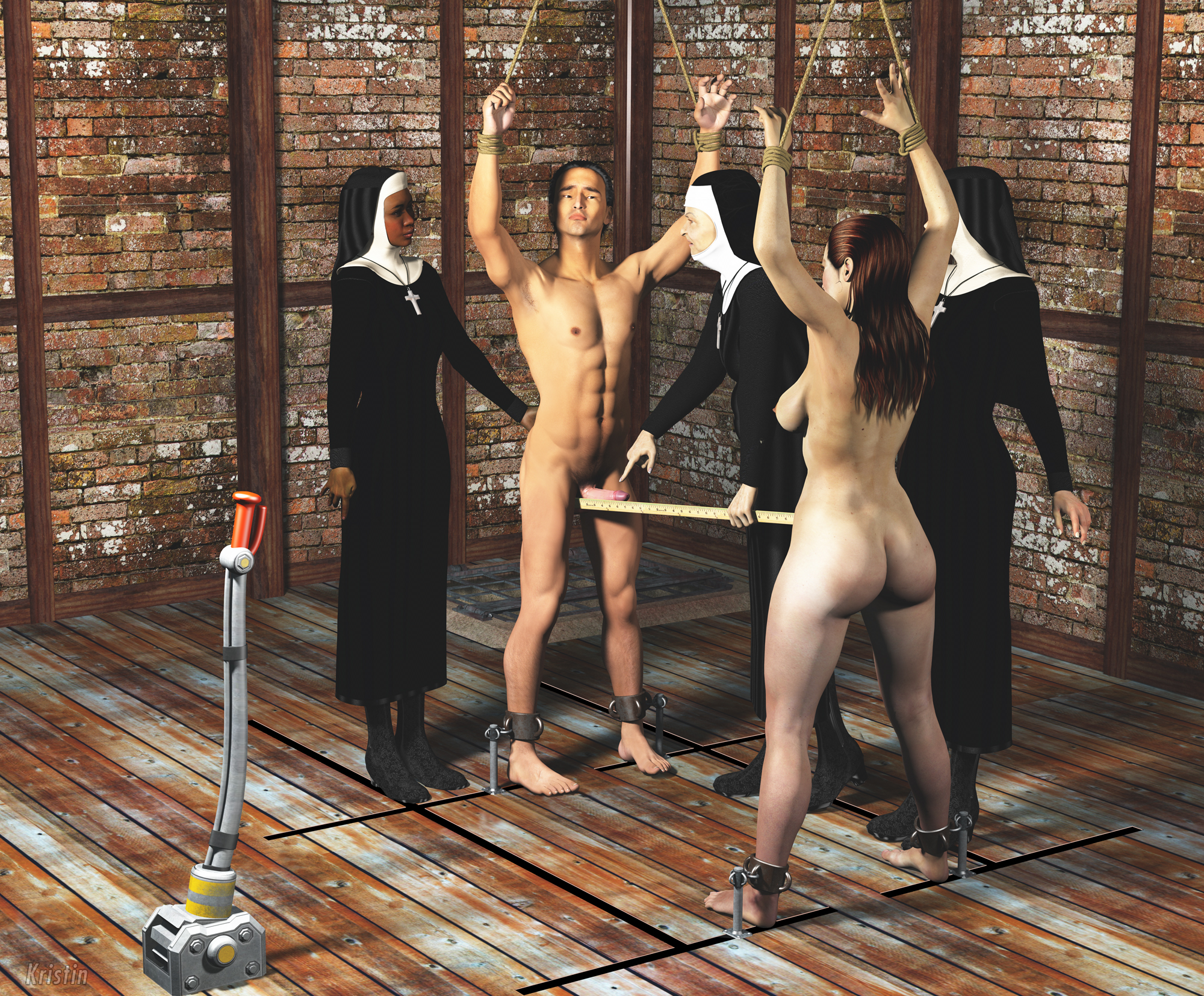 Willie & Rayna Dungeon Sequence III by KristinF and commissioned by Dr. Faustus of EroticMadScience.com is licensed under a Creative Commons Attribution-NonCommercial-NoDerivs 3.0 Unported License.)

.It turns out that the nuns who run Mary Magdalene college do not take kindly to unsupervised frolics taking place on their real estate and resolve to deal with Willie and Rayna but good. 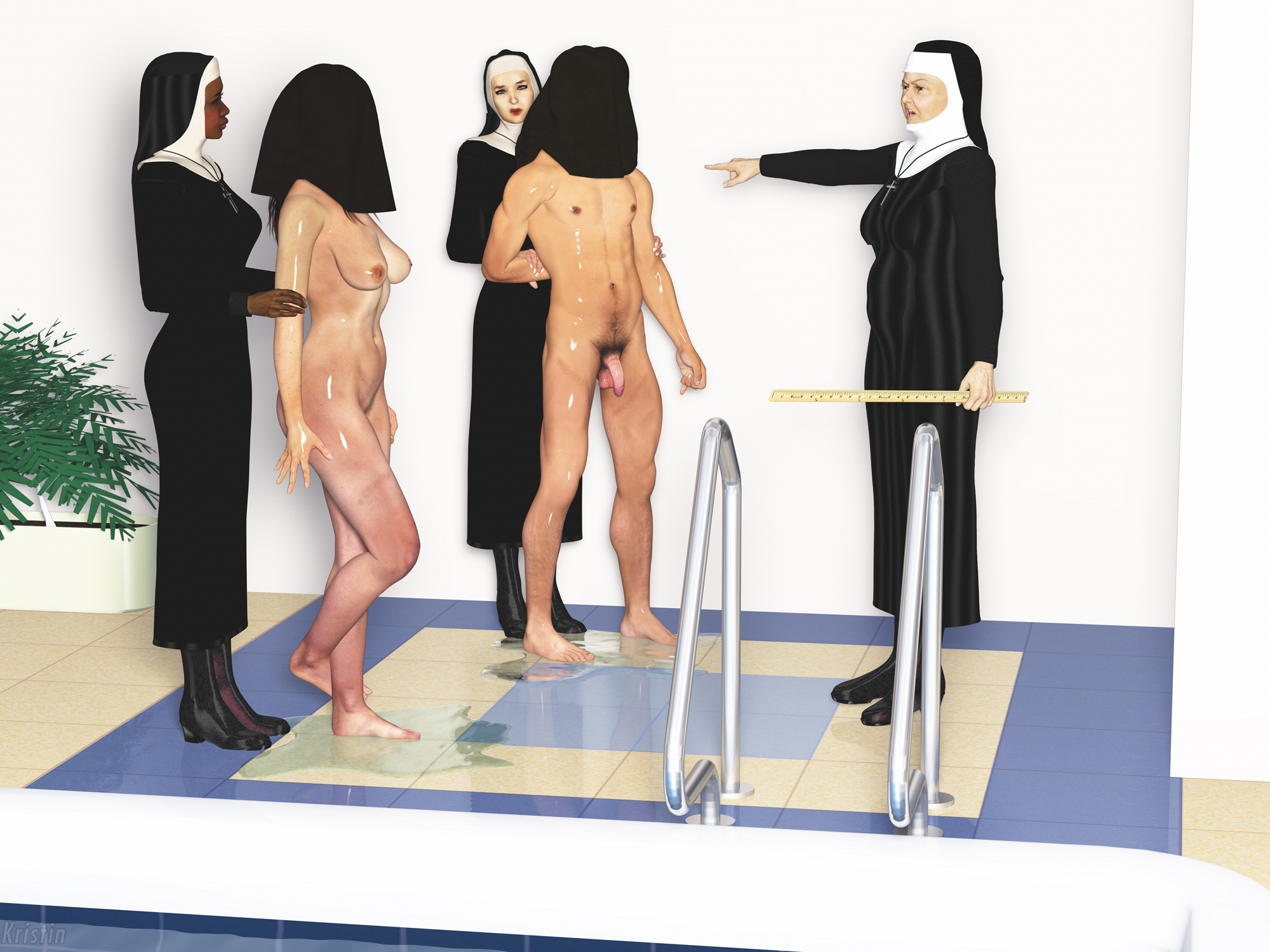 Willie & Rayna Dungeon Sequence II by KristinF and commissioned by Dr. Faustus of EroticMadScience.com is licensed under a Creative Commons Attribution-NonCommercial-NoDerivs 3.0 Unported License.)

Today we begin a new four-illustration bespoke art sequence, done in 3D by artist KristinF. Kristin has illustrated the first of Willie’s many sexual misadventures from Progress in Research.

Lord Byron, in Don Juan, describes part of the education provided for young Juan by his widowed mother thus:

Sagest of women, even of widows, she
Resolved that Juan should be quite a paragon,
And worthy of the noblest pedigree
(His sire was of Castile, his dam from Aragon):
Then for accomplishments of chivalry,
In case our lord the king should go to war again,
He learn’d the arts of riding, fencing, gunnery,
And how to scale a fortress—or a nunnery.

Education and the world having may moved on from the romantic by-gone days of chivalry, but young men are just as pecker-directed as ever.  Willie (with a little help from his gadgeteer genius friend Aloysius, manages to make a late-night break-in to adjacent claustrated Catholic girls college Mary Magdalene  not by scaling its walls by by breaking into its steam tunnel system.

Aloysius (perhaps sensibly) declines to accompany Willie on his tour of the girls shower room and pool.  Too bad perhaps, as Willie discovers adventurous young Rayna out for what had up to then been a solo late-night skinny dip. 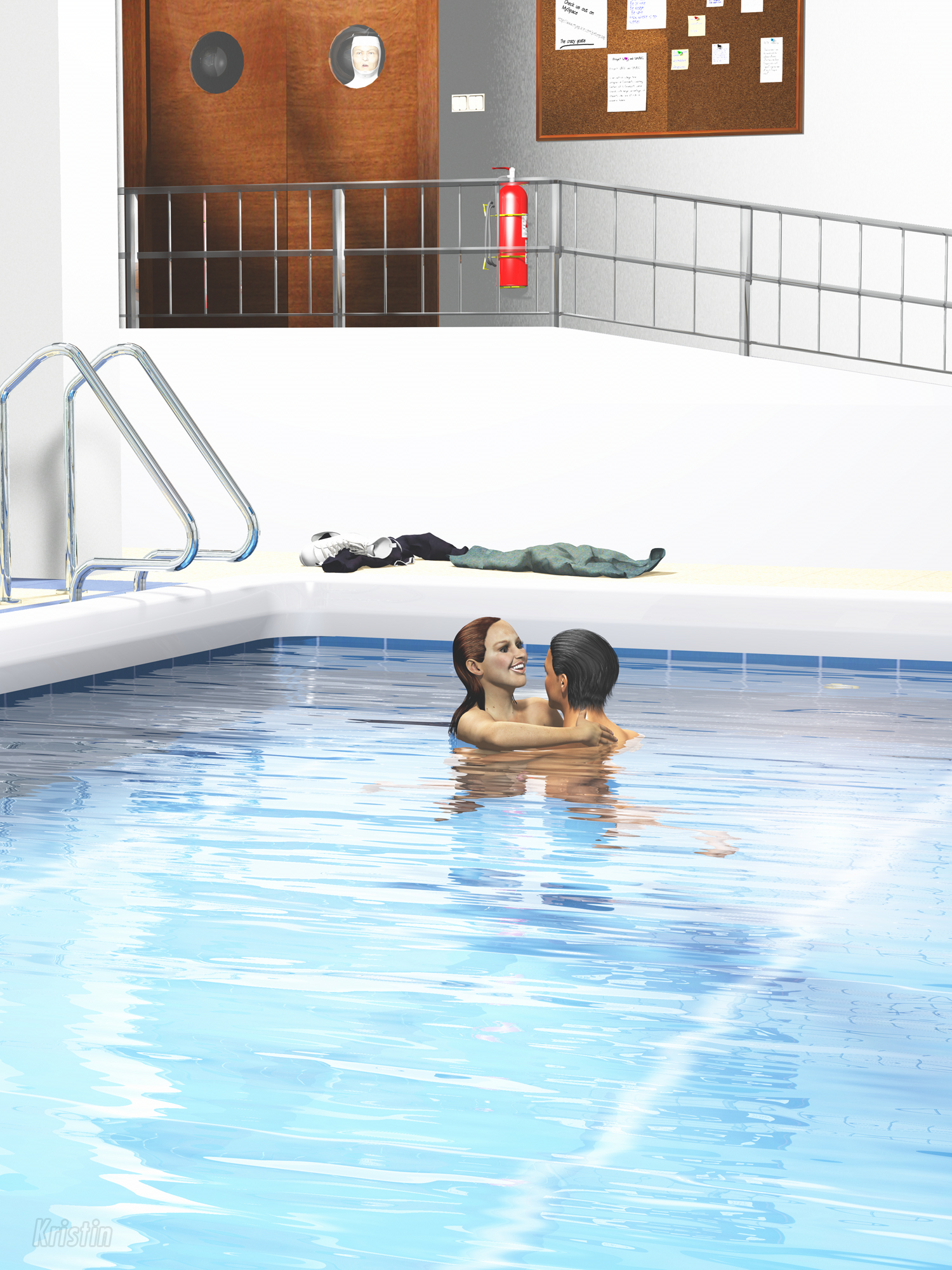 Willie & Rayna Dungeon Sequence I by KristinF and commissioned by Dr. Faustus of EroticMadScience.com is licensed under a Creative Commons Attribution-NonCommercial-NoDerivs 3.0 Unported License.)

More art by KristinF.  After her bath, Marie is ready for her rollout.  Literally:  she is bound inside a wheel and rolled out, a radical bondage experience designed to induce a maximum sense of helplessness and disorientation.  Naturally, it gets all kinked up further by having two rather well-endowed male slaves do the binding and rolling. 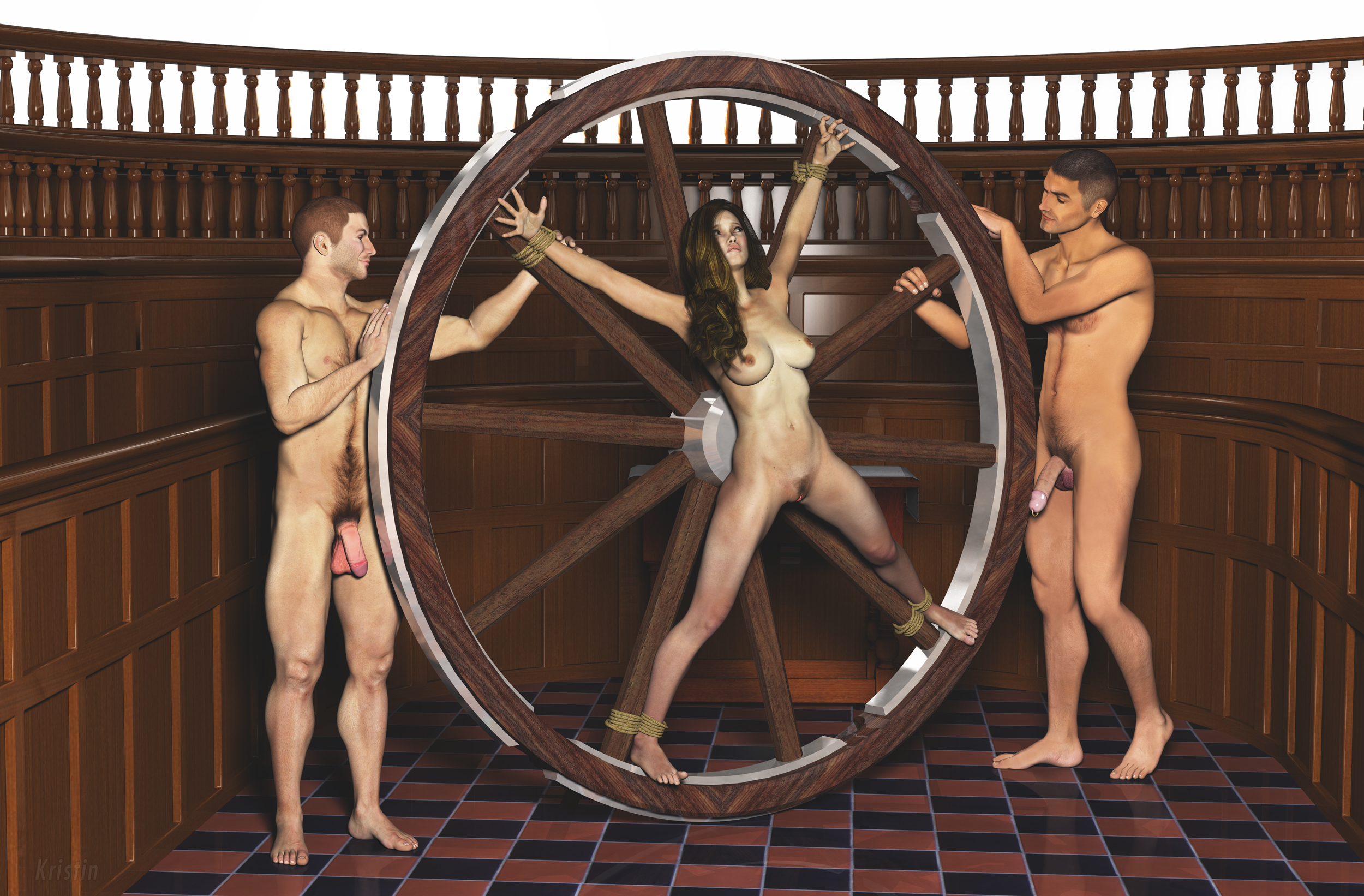 Marie Bound in the Wheel by KristinF and commissioned by Dr. Faustus of EroticMadScience.com is licensed under a Creative Commons Attribution-NonCommercial-NoDerivs 3.0 Unported License.)

Kristin did good work on Marie’s facial expression here IMHO, but you’ll have to click through to get the detail.

Lucky (?) Marie has a would-be savior determined to get her out of bondage. Though at this point it is very unclear whether he (??) will succeed….